The best way to wash pesticides off apples • Earth.com 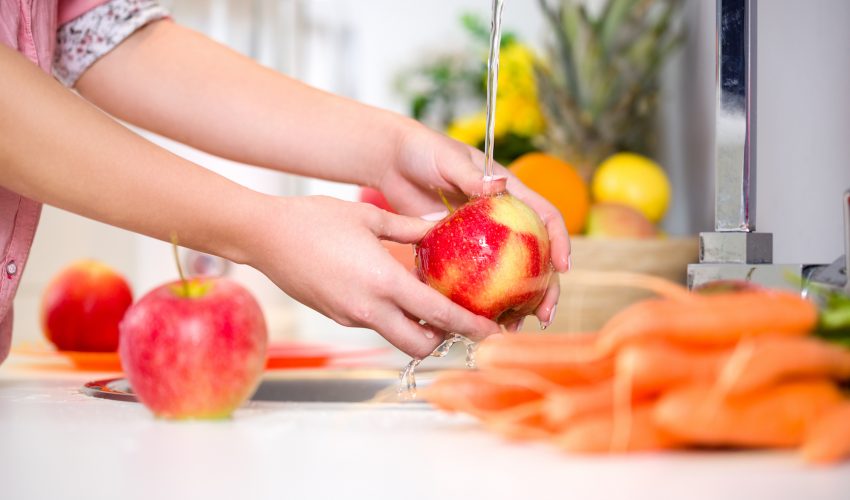 The best way to wash pesticides off apples

When rinsing off an apple to eat, it may not occur to you that this fruit is most likely contaminated with pesticide residue. A new discovery by scientists found that baking soda, an item commonly found in homes, effectively reduces the pesticide remains found on fruit.

The United States Department of Agriculture (USDA) found 47 different pesticides on apples tested for the Pesticide Data Program. While pesticides are helpful in improving crop yields, concerns have been growing over their potentially harmful impact on human health.

It is standard practice in the food industry to wash fruit with running water, but some of the plant-protecting compounds that get absorbed by fruits and vegetables may not be removed by tap water. A research team led by Lili He set out to identify a washing strategy that can successfully eliminate contamination found on produce.

The researchers applied two common pesticides, the fungicide thiabendazole and the insecticide phosmet, to organic apples. They then washed the apples with tap water, a baking soda/water solution, and a U.S.-EPA-approved commercial bleach solution.

The study revealed that the baking soda solution removed the most of the two pesticides from the apples. The water and the bleach solution proved to be much less effective in reducing the contaminants.

Because thiabendazole is absorbed more into the apple, it may not be as easy to remove.

Images showed that thiabendazole had penetrated up to 80 micrometers deep into the apples, while phosmet only reached a depth of 20 micrometers.

The findings of the study are published in the American Chemical Society‘s Journal of Agricultural and Food Chemistry.