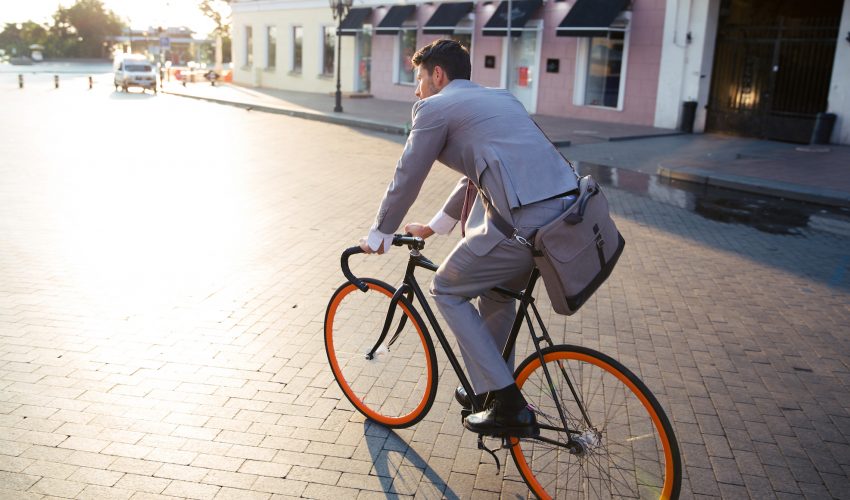 Friday May 19th is Bike to Work Day, and in honor of the occasion, we’ve accumulated a few stories of the success of biking as an alternative to CO2-spewing road vehicles.

Cykelhuset is a thing, apparently. The word means “bicycle house” in Swedish, and it refers to a new seven-story apartment building in Malmö that comes with everything but parking spaces.

“The strategy is to look at why people have to use cars, and substitute bikes for the cars,” Cykelhuset’s architect, Cord Siegel, told Fast Company for an article that ran last August.

Among reasons for a car culture to exist anywhere is the need to drive to and from work. So Cykelhuset was built close to the city center and train station.  Shoppers must also drive in order to carry cumbersome packages. So Cykelhuset residents get oversize mail delivery boxes for ease of online shopping. And the complex offers the use of cargo bikes for transporting kids or larger packages.

For convenience’ sake, the building’s elevators are wide and the doors open at both ends for the easy on-off maneuvering of bikes to apartments. In short, just about every detail has been addressed to make it easier for residents to make bikes their main mode of transportation.

Cykelhuset might not be that unusual today. Many areas of the world — including significant portions of the U.S. — have discovered the benefits of biking in terms of not only personal health, but its contribution to the health of the planet.

According to a publication released by the Clean Air Council, motor vehicle emissions represent 31 percent of total carbon dioxide, 81 percent of carbon monoxide and 49 percent of nitrogen oxides released in the United States.

Sure, vehicular emissions aren’t healthy, but what’s the alternative? Actually, it’s easier than you might think.

From the Nationwide Personal Transportation Survey, sponsored by the U.S. Department of Transportation, comes the fact that half of the working population commutes five miles to work, or less. Twenty-five percent of all trips are made within a mile of the house, and more than 82 percent of trips of five miles or less are made by motor vehicle. See the opportunity?

Then there’s this from the Environmental Students Organization at the University of California, Sacramento: “Between 70 and 100 bicycles can be built with the resources to build one car.” The group also points out that a typical road can accommodate three times more bikes than cars, and, well, you can just about park anywhere — for free.

The bottom line is that bike riding reduces harmful gases into the atmosphere, uses far less natural resources in production and take up less space on the road and in parking.

Believe it or not, some of the largest and most famously congested American cities — Chicago, New York and San Francisco — are among the nation’s most bike-friendly metros, according to Bicycling Magazine’s bi-annual ranking of 50 Best Bike Cities. Or maybe it makes a lot of sense. Bicyclists whizz by idling drivers in most of our major cities.

The high ranking of The Big Apple is the result of significant bicycle infrastructure investments, states Bicycling Magazine: “Across the city, (bicycle) ridership increased by 83 percent between 2010 and 2014, according to a recent report from the NYDOT. Additionally, data from Citi Bike, the country’s largest and most popular bike-share system, shows that in Midtown bicycle speeds now outpace cabs by 2 mph.”

The number-three position in the 2016 bike-friendly city ranking was taken by Portland, Oregon.  The West Coast city is so into biking that the annual Pedalpalooza is a major tourist attraction. The nearly month-long celebration of biking starts June 1 and features 239 riding events for bicyclists of all ages and skill levels. The most famous event is the World Naked Bike Ride — but never fear — most events are not clothing optional, and some are even costumed rides.

Those crazy Scandinavians. In addition to Cykelhuset, the region has adopted a small fleet of pedal-powered school buses for transporting kids as young as four. A bike bus is pretty much what it sounds like. It’s a pedal-powered mass transit vehicle that looks like a kid-friendly school bus and is powered by an adult operator and nearly a dozen riders who actually ride — they don’t just sit there.

When there aren’t enought pedal-pushers to provide power or the terrain’s too steep, there’s an electric motor for added oomph. Each bike bus, currently available in parts of the Netherlands, Belgium and Germany, only costs $15,000. This is, as TreeHugger points out in this article, “just over twice the cost of fuel consumed by each regular school bus per year in the United States.” (Of course, it should also be pointed out that conventional school buses carry many more passengers than the bike buses, so most school districts would have to expand their fleet sizes in converting to the kid-powered vehicles.)

The Tempo is right

Sure, biking is great, but you’ve got to cut residents of such famously hilly cities as San Francisco or Pittsburgh a little slack — right? And how about those who live too far away for convenient pedaling? A long bike ride would leave them sweaty and exhausted before they even showed up for work…late, no doubt.  Surely they can’t enjoy the benefits of a bicycle commute.

“My goal is to get more butts on bikes,” Van Nguyen, the owner of Tempo Bicycles, told Earth.com.

Nguyen’s hybrid electric “ebikes” democratize the act of bicycling by assisting the rider with a rechargeable electric motor that’s employed only when needed.

“All you have to do as a rider is control how much assist you want,” she said. “If you want to work out you decrease assist,” and pedal your way to your destination.

Nguyen described a scenario in which a Tempo bicyclist uses assist power on the way to work in order to arrive looking her best, and then pedals home for a go-for-broke end of day workout. She also sees her bikes as ideal vehicles for seniors who want to stay active but aren’t as physically capable as they once were.

“It’s about mobility as well as sustainability,” Nguyen said about bicycling in general and her Tempo Bikes solution for all.

Thinking about at least giving biking a try? Bike-to-Work Day is a great time to grab a little motivation. Get psyched by considering the possible bottom-line benefits. Use this savings calculator by Kiplinger to plug in your current car commuting costs and see how much you could save by even occasionally pedaling your way to a healthier you and a slightly greener planet. You could also use this bike mileage calculator tool from BikingExpert to monitor miles biked and real time speed.