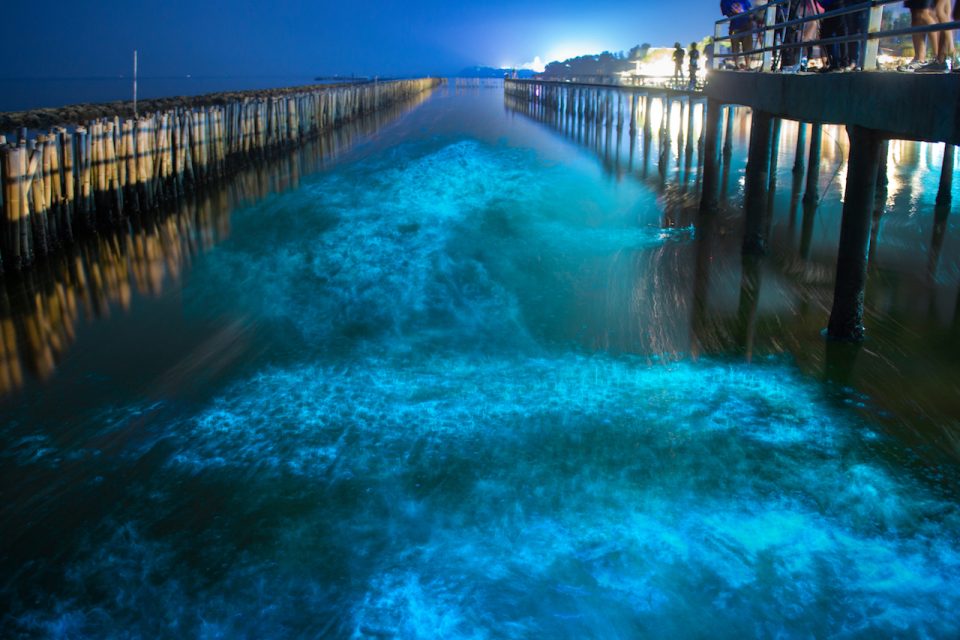 The first time I saw bioluminescence in a fish, it was easy to think I might just be imagining it.  It’s never truly dark in the summer of Alaska and as I sat amid Rhinoceros Auklet burrows, the light was something like twilight.  The small, dead fish I held in my hand was taken from a parent auklet bringing food to her chicks. We took few samples so that the chicks still ate enough, but the research could conceivably impact how these birds were managed by government agencies like the one I was interning with.  I paused from my work to stare at the fish. The researchers I was working with confirmed that the fish was glowing, an interesting effect from very small organisms found in the ocean. Much more impressive night-time displays of marine bioluminescence can be found in other parts of the world.

A friend of mine once visited Puerto Rico and told me of seeing the whole ocean alight with moving, tossing, glowing life in waves.  According to the Smithsonian Institute, glowing marine organisms live throughout the water column from the seafloor to the crest of waves.  Glowing ocean animals also live from near the shore to far out in the open sea.

Puerto Rico, where my friend saw bioluminescence, along with Malta, Japan, Florida, California and Taiwan all boast their own night time spectacle of bioluminescent tides.  Researchers in Taiwan particularly looked at the bioluminescence of the Matsu Islands in Taiwan with an eye towards predicting a season for the spectacle and attracting tourism.

Since there is so much bioluminescence in the ocean, it’s no surprise that there are many different species that glow.  Noctiluca scintillans, a dinoflagellate, not technically either animal or plant, was responsible for the glow on the Matsu Islands.  Dinoflagellates are phytoplankton and N. scintillans looks like a tiny (0.2 to 2mm) jellyfish.  The dinoflagellate eats its food rather than producing it through photosynthesis as a plant would, catching prey with tentacles.  N. scintillans glows when it’s disturbed, and this means if it’s attacked or if a boat passes through a group of the dinoflagellate, the ocean will appear to glow.  In the case of glowing tides, the disturbance is merely the movement of the water against land and rock. Other dinoflagellates glow as well. In California, the dinoflagellate Lingulodinium polyedra, has been found to cause glowing tides as well as the phenomena known as red tide.

Red tide is caused by large accumulation or organisms like these dinoflagellates.  Often called algal bloom, the red tide is actually caused by many different organisms, including dinoflagellates, diatoms, protozoans and algae.  These organisms are preceded by upwellings of nutrient dense water from deep in the ocean, sometimes caused by storms or seasonal temperature changes.

Red tide can be devastating.  This rich soup of organisms creates many chemicals that are toxic for many larger animals.  As we reported in 2018, Florida was hit by one of the worst cases of red tide in a decade.  At least 400 sea turtles were poisoned by the red tide as well as fish, seabirds and other animals caught in the toxic algal bloom.  About 100 miles of Florida coast were affected by the red tide. The accumulation of toxins in the red tide even made beach goers cough and caused their eyes to water, according to one report from Weather.com.  It’s amazing that something so ugly during the day could look so beautiful at night.  Glowing tides aren’t always dangerous and bioluminescence certainly is not.

The Guardian reports that the organisms responsible for that state’s red tide in May also caused incredible night time bioluminescence without being toxic.  There are many different species of dinoflagellates and other organisms glowing at night in the sea, some of them are poisonous and others are relatively harmless.  The reasons for the glowing isn’t entirely understood. Some feel that the light is meant to distract animals trying to prey on the glowing dinoflagellates. Other organisms like the nightmarish anglerfish live in constant darkness and use bioluminescence to lure prey to them.  Some squid use bioluminescence to communicate as well as to hunt.

Bioluminescence all seems to come from one chemical: luciferase.  The word has the same root as ‘lucifer’ which simply means ‘light bearer’.  Luciferase is simply an enzyme that when exposed to oxygen creates light. There are different varieties of luciferase and they’re controlled differently in different organisms.  In squid, the animal doesn’t even create luciferase itself, and is instead host to micro-organisms that glow for them. Some bioluminescent organisms can control the color and brightness of the light they produce.

Under the sea, the process is similar to what happens inside fireflies.  Fireflies themselves are amazing animals and have been observed coordinating their lights together by the thousands.  Whole trees and hillsides flash in the dark where this happens and we don’t know exactly why, just like we don’t fully understand the dazzling display in the oceans all around us.

The whole sea is speaking one organism to another in a language older and broader than humanity, and all we can really fathom is the simplest point of its eloquent beauty.