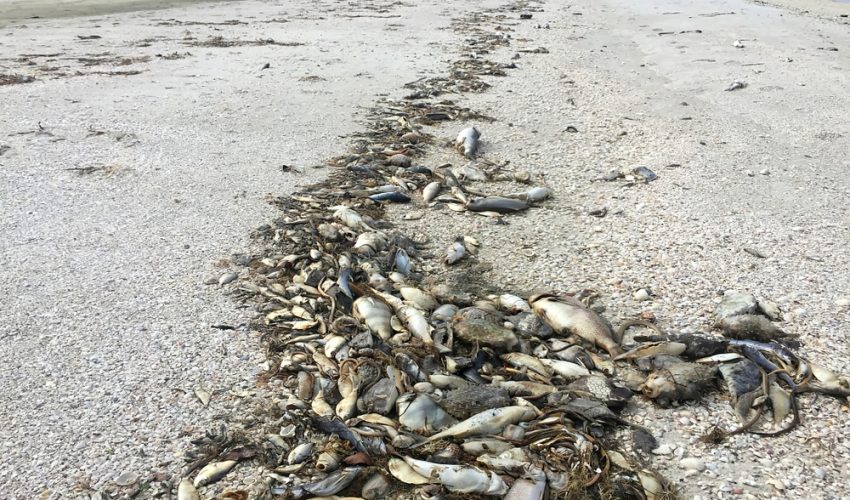 The sparkling white sand of Florida’s southwestern beaches aren’t dotted with sunbathers this week. Instead, they’re strewn with the corpses of dead marine creatures, victims of a red tide.

While the toxic algae blooms known as “red tides” are common off the coasts of the Gulf of Mexico, the Florida Department of Environmental Protection is calling the current event the worst in a decade. The state’s governor has declared a state of emergency.

At least 400 sea turtles have died, Newsweek is reporting. Several news outlets reported that a dead manatee was also recovered off the Florida coast, and at least one biologist found evidence the red tide may have killed a whale shark. Tissue taken from the whale shark’s organs and muscles tested positive for brevetoxin, a neurotoxin created by the algae.

“This whale shark was definitely exposed to the bloom, and we know brevetoxins (are deadly),” spokeswoman Kelly Richmond of the Florida Fish and Wildlife Commission told the Washington Post.

While biologists are still working to determine the cause of death, if the algae bloom did play a role, it would be the first known incident in which a whale shark has been killed by a bloom.

About 100 miles of the Florida shore have been affected, and the red tide looks like a persistent one. The algae bloom – which gets its name because the microscopic algae often turn water red – has already lasted since November of last year, and could stretch into 2019, some scientists are saying.

“Many people will tell you that this is the worst they have ever seen,” Jacylin Bevis, a reporter with the NBC affiliate in Fort Myers, Florida, told NBC News. “It’s our entire south Florida coastline with the red tide and then with the blue-green algae on the rivers and canals.”

Most algae blooms are beneficial to the ocean, providing a source of food for marine creatures. Red tides, on the other hand, produce toxins that can harm or kill sea life.

Usually, cold spells break up or kill off some of the algae, but not this time. The red tide is going strong – and has been joined by toxic blue-green algae invading Lake Okeechobee, and several of the state’s rivers and canals, Newsweek said.

More than a dozen people have gone to the emergency room after exposure to the blue-green algae, also known as cyanobacteria.