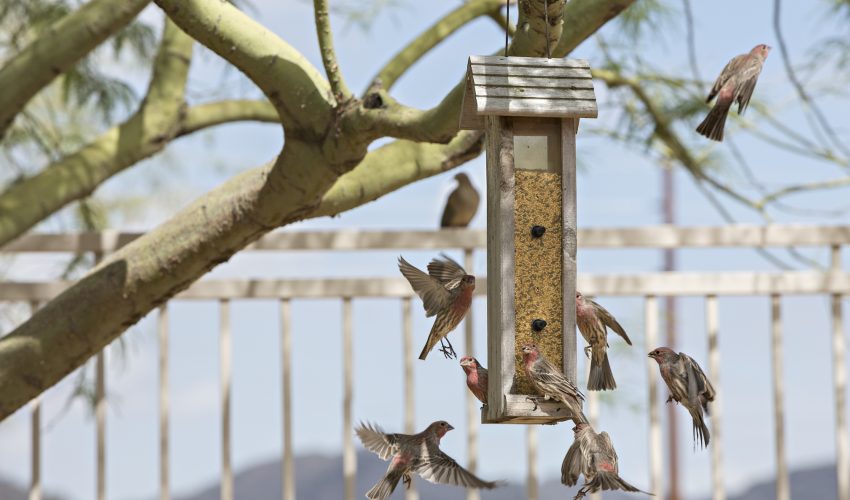 Are bird feeders really helping birds in the long run?

Feeding wild birds has become commonplace and few consider the consequences.  On the face of it, feeding birds seems like a harmless, fun way to interact with wildlife.  Once allowing bears to eat from trash dumps at Yellowstone was seen in the same light, a fun way to easily view wild bears up-close.  A big part of the problem involved with feeding bears has to do with their danger to humans. If a bear associates people with food enough, the bear might endanger people in her quest for nourishment.  In the end bears that get too friendly with people usually have tragic ends. There are some other real problems with feeding birds though.

When my fiancé, Erin and I co-managed a nature reserve in Ecuador for three months, a part of our work involved inventorying hummingbirds that fed on the sugar water in feeders we put out.  Initially, I didn’t think too much about the feeders, but over the time we stayed at the reserve, I began to consider it more deeply.

In the log left by other reserve managers, were accounts of hummingbirds weak when the managers couldn’t fill the feeders for a day or two due to a minor medical emergency.  I wondered if the hummingbirds could become so dependent on feeders, I wasn’t sure but it lead me to other questions. In the case of hummingbirds, I wondered if plants could suffer from having less pollinators.  We couldn’t identify individual hummingbirds but there were certainly species that were almost always at the feeders in numbers. I wondered if some birds gained a majority of their ‘nectar’ from feeders and barely visited flowers.

Still, one plant, Cardinal Sage (Salvia fulgens) was shown to produce less seeds, presumably due to less hummingbird visits.  I also found a paper written by Ilse van Duuren as an intern at Un Poco del Chocó, a private nature preserve and conservation organization.  Ilse van Duuren found that hummingbird feeders do in fact negatively impact plant reproduction rates, she also called for more research on a sadly neglected question.  I personally was rather shocked at how many nature preserves, conservation organizations and research stations in the neotropics promote the use of hummingbird feeders when so little research has been done on their effect.

A study by W. Herbert Wilson Jr. in Journal of Field Ornithology showed that the placement of bird feeders can significantly impact habitat selection of wintering birds in Maine.  Feederwatch.org notes that diseases such as House Finch Eye Disease can be spread by some bird feeder types.  Tube type feeders that require birds to stick their heads inside contact bird’s eyes and can spread disease that way.  Feederwatch recommends cleaning feeders regularly with dilute bleach and taking feeders away for a couple of weeks to encourage bird dispersal if a diseased individual is noticed.

Other sources note that cats or hawks may gather near bird feeders to prey on large populations of feeding birds.

Feeding birds in the US originated with the idea of helping birds through hard winters.  The US and UK differ from Australia, where feeding birds is generally looked down upon. In the US, many conservation organizations encourage feeding birds as a way to promote understanding and a feeling of closeness to nature.  Feeding birds is certainly a good way to observe and learn about your avian neighbors, less certain is if feeding helps birds.

A study in Conservation Physiology by Travis E. Wilcoxen et. al, found that overall physiology of birds at feeders was improved when compared to birds that didn’t use feeders.  There were more cases of disease found in birds at feeders, but the birds receiving supplemental feed seemed to have better fat reserves and immune responses.  In other words, the birds being fed were better equipped to handle disease than those not being fed.

The main reason many people give for feeding birds is to give them a helping hand.  Seeing birds die of apparent starvation in the winter is hard. I remember a yellow song bird that flew into a tent I shared with two other climbers on a mountaineering trip on Denali.  The bird sat in our vestibule, ate some of our granola and other snacks, even landing on our heads. The bird on Denali had unfortunately been blown there by a storm and was unable to find his way back to his normal habitat.  A day later the bird was found dead in the snow. Instances like this happen nearer to people’s homes, birds sometimes die of exposure to elements and starvation, and winters are sometimes especially hard. Feeding, it seems, can help individual birds.

An added complexity to feeding birds is migration.  Many of the birds seen at feeders and elsewhere in North America travel far south, even to South America in the winter.  The reasons for migrating are complex but there is actually often more food for birds in the spring and summer in North America than in the tropics.  The tropics always has a small supply of food, a few things are almost always in fruit but spring in the temperate region means a bonanza of many things in fruit all at once.   Feeding birds can change their migration patterns.

The American Robin is a perfect example.  Due to an increase in not only feeders but crops and planted shrubs, a larger percentage of robins stay north for the winter.  A bird that normally winters further south can suffer more from feeding by being in a colder environment than the one it evolved for.  An article in Science Daily points out an additional benefit to migration for bird populations.  Especially sick or parasitized birds are less likely to survive migrations; a migration can be a way to stop the spread of disease and protect healthy animals from the exposure of parasites.  Birds that migrate may also miss out on prime breeding grounds and other resources already taken by those that stay year round. Birds just finishing a migration also have a much greater need for food as they expend serious amounts of energy during long migrations.

Sandhill Cranes stopping in Nebraska to gorge on food in the midst of an incredible and long journey by wing now depend on leftover corn crops.  The cranes travel from wintering grounds in Mexico, Arizona and New Mexico to breeding grounds in the arctic. According to OutdoorNebraska, 90 percent of the crane’s diet is corn while in Nebraska, 10 percent being made up by invertebrates.  Overall, it’s estimated that the cranes consume 1,600 tons of corn while passing through Nebraska. Clearly corn is important to the Sandhill Crane but it’s important to note that corn is only important because natural grasslands and marsh areas have become developed.  Cranes stopped in Nebraska long before corn was planted there, for native plants and animals. Fields with the residue of agriculture allow the continuation of an ancient migration pathway in a way that other forms of development would not. However, it’s easy to see that human intercession didn’t make things better for cranes, rather, we replaced one food with another.

Bird feeding is here to stay.  I doubt this article will convince anyone to stop feeding birds, but I hope it can encourage a thoughtful approach.  Cleaning feeders often can help stop the spread of disease. Watching carefully for sick individuals and removing feeders for a couple of weeks can also help prevent disease transmission.  Trying your best to keep cats away from feeders or making bird feeders inaccessible to them can help. If a cat does start stalking birds near a feeder, it’s a simple thing to bring the feeder in, it may be harder to convince the cat’s owner to keep their animal indoors.  Bringing feeders in when the weather starts to get cold can also make a difference in encouraging normal, natural migration patterns. We all desire to be closer to nature, to have a real connection with the animals we share the planet with.