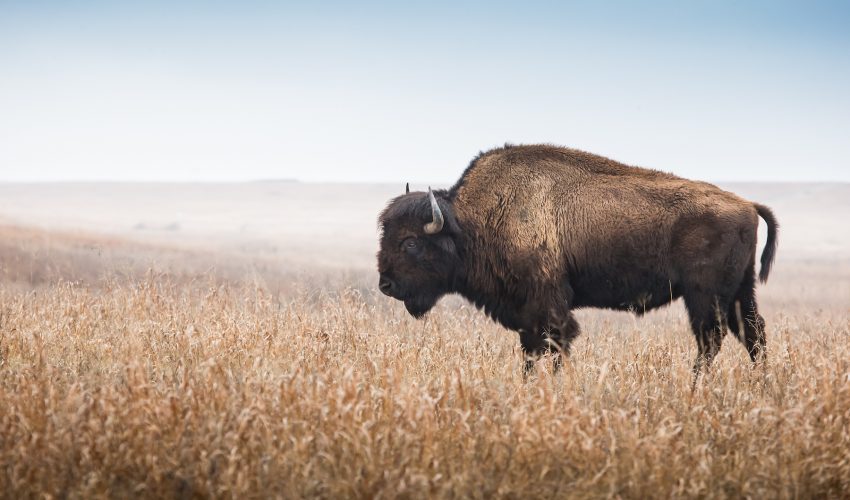 We felt the truck rocking and looked at each other, concerned. We were in South Dakota, parked near the edge of a bison heard wandering across and around a road. One of the furry animals had passed us in the truck and now was behind the cab, rocking the whole truck a little. Bison are large, strong and dangerous. I looked in the mirror to get a view of the animal and laughed. The bison was licking the truck. It had snowed not long ago, the roads were salted and the Bison was licking salt from the bed of the truck we were sitting in. It’s rare to see bison, much less hundreds of bison wandering the prairie as they must in the past. Moving to South Dakota opened a world of grass, a place of Bison and we were thrilled to be there.

We drove back through Custer’s wildlife loop to see the bison when they were calving, my partner smiled to see them, calling them little cheese puffs. They did look like cheese puffs, with orange-ish fur puffed out over their bodies. The babies ran and jumped like any young animal, thrilled to be alive and young.

We hiked in Wind Cave National Park, Jewel Cave National Monument and Badlands National Parks, all great places to see Bison. We walked through enormous prairie dog towns and spotted burrowing owls. We howled back at coyote packs and listened for their yippy reply. We hiked in snow and sun; we slept in a tent.

The Bison’s survival has depended on a complete change of policy and practice for both the American government as well as its citizens. Bison were once plinked away by the millions for hides or simply to decimate Native peoples. While killing bison, many commercial hunters poisoned the carcasses after they were skinned, indiscriminately killing eagles, foxes, coyotes, wolves, mountain lions, bears and more. Bison were a hated symbol of the wild, of enemy cultures of everything not brought under the rule of government.

Things changed when it was almost too late for the Bison. Bison were bred by ranchers in the west and the American Zoological Society at New York’s Bronx Zoo. Now zoo animals, Bison were reintroduced to places like Yellowstone and Wind Cave. Bison were stamped into nickels, the flipside of a stereotypical ‘Indian’ head.

Bison are now the official national mammal of the US. What was once the symbol of the ‘other’ has become one of our own cherished national symbols. The problem is the bison was never our symbol for the taking. The National Bison Legacy Act, which designated the Bison as our national mammal had Native American support. So, in a way the symbol of the Bison was given, not taken. I would argue it was given in the same way a treaty may be signed by the defeated: with no other option viable.

Before the Bison could be thought of as a symbol of the United States by officials, it had to be stripped of the original mythological trappings. For centuries, before white settlers set foot on American shore, bison were fraught with symbolic power. Bison were literally life to many Native American tribes. Beyond being a source of food, shelter and materials, Bison nourished Native American spirit. Tatanka is the Lakota word for Bison or Bison bull. A literal translation of Tatanka is more like, ‘He who owns us’. Tankafund.org elaborates, saying that for traditional Lakota, you cannot say what you own because the Bison owns you.

The deep cultural and ecological connection between Bison and many Native Americans is what lead to near annihilation of the Bison. If the US could smash the Bison, they could smash the plains Indians. Eventually of course a sort of peace was reached between the federal government and native peoples. Native American groups were pushed into small reservations and fed with rations from the government. Bison for a while were forgotten.

Over time things changed, the actually history of hatred and destruction was forgotten. Things were romanticized. Native Americans became a romantic, noble race who fought valiantly for freedom. Native Americans became a symbol of a west that never was to a people who have never had any love for them. Bison too became something different. With the destruction of most of what could be called wilderness imminent across North America, we became nostalgic. Bison had been tamed, herded up and redistributed into fenced parks. Why not make them a national symbol?

The problem is that by making the Bison the national symbol of the US, we declared a unity between the federal government and the enemies of the government. The US and state governments within it are still rather ambivalent about wolves, which play their own important role in Bison ecology. The same is true of bears, mountain lions, coyotes, prairie dogs and many, many more. The government still leases out prime bison habitat for cattle ranching.

The Bison as official symbol, like many American promises is one that still must be kept. Equality was an American byword for a long time before women could vote, before African Americans and Native Americans could vote. I hope as a symbol the bison with a shake of shaggy head can lead us to a place where the Bison can be what it’s really always been: a wild animal. 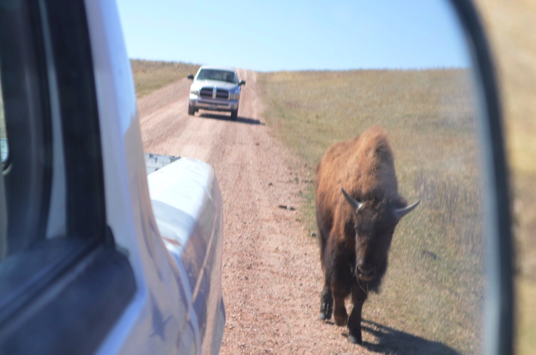