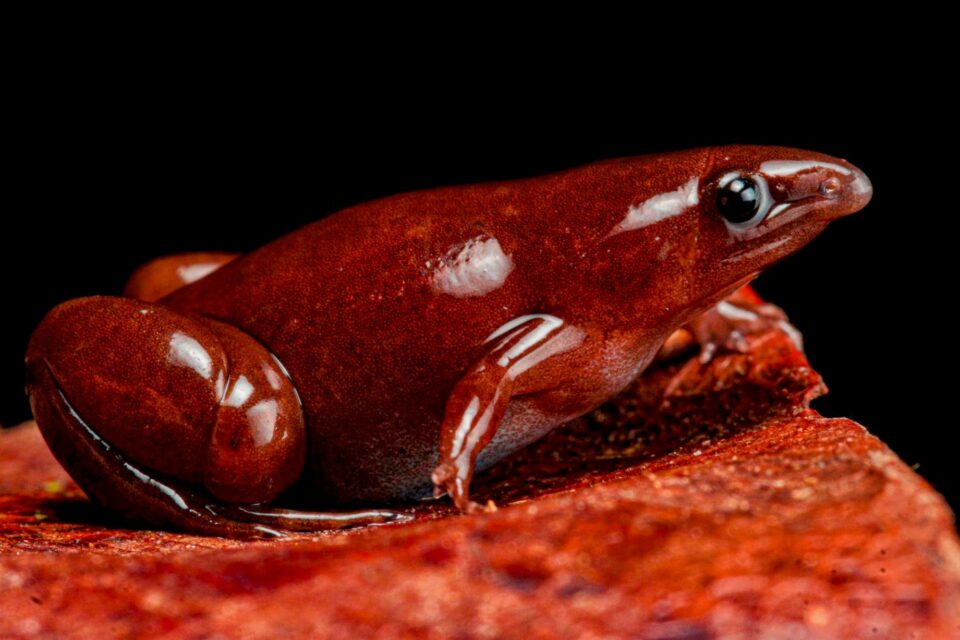 A bizarre new species of frog (Synapturanus danta) with a nose similar to a tapir’s has recently been discovered in the Amazon rainforest in Loreto, Peru. Its body shape and general appearance seem to be perfectly adapted for burrowing in the soft soils of the Amazonian peatlands. The field researchers were only able to find it by tracking its distinctive, “beeping” calls through the peatlands and digging on their hands and knees, with the help of local guides.

The inhabitants of Peru’s Comunidad Nativa Tres Esquinas have long been familiar with this tiny, burrowing frog with a long snout. A local name for it is rana danta (“tapir frog”) due to its resemblance to the large-nosed Amazonian mammal.

“These frogs are really hard to find, and that leads to them being understudied,” said study co-author Michelle Thompson, a researcher at the Field Museum in Chicago. “It’s an example of the Amazon’s hidden diversity, and it’s important to document it to understand how the local ecosystem functions.”

“Frogs of this genus (Synapturanus) are spread throughout the Amazon, but since they live underground and can’t get very far by digging, the ranges each species is distributed in are fairly small. Since we found this new species in Amazon peatland, it wouldn’t be strange for it to be restricted to this environment. Its body shape and general look seems to be adapted to the soft soil of the peatland, rather than the robust and wider shape of species in other environments,” added study lead author Germán Chávez, a researcher at the Instituto Peruano de Herpetología in Lima, Peru.

Synapturanus danta is a brown, small creature with a blobby body and a tiny pointy head that emits a pointed, “beeping” sound that helped researchers localize it. This species belongs to a group that evolved in the prehistoric wetlands of the Western Amazon. Due to their burrowing behavior, these frogs most probably have a crucial role in nutrient cycling and changing the soil structure.

Peru’s Putumayo Basin, where the frog was discovered is part of a larger conservation scheme. “The Putumayo Corridor spans from Ecuador, Colombia, Peru, and down to Brazil, following the Putumayo River. There’s very little deforestation, and it’s also one of the last free flowing rivers that has no current dams. There’s like a huge conservation opportunity to conserve the whole corridor, watershed and surrounding areas. This tapir frog is another piece of evidence of why scientists and local people need to work together to protect this region,” concluded Thompson.

A detailed description of this new species is published in the journal Evolutionary Systematics.