Asiatic black bears focus on protein to bulk up for the summer • Earth.com 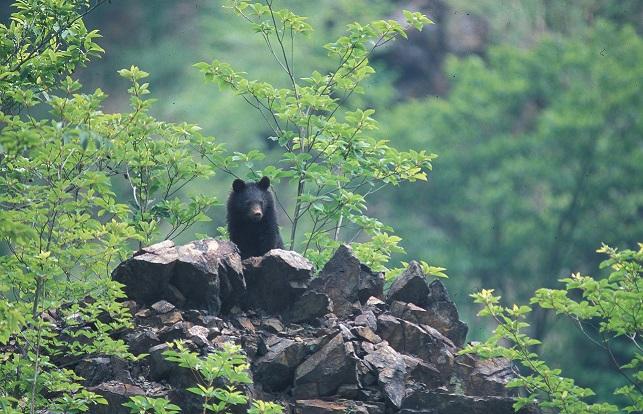 Humans aren’t the only species trying to get fit for summer, according to a new study published in the open access journal ZooKeys. The study, led by Dr. Shino Furusaka from Tokyo University of Agriculture and Technology, found that Asiatic black bears focus on finding protein-rich food leading up to the summer so that they can replace fat tissue from the previous year’s hibernation with lean muscle mass.

By following a large number of black bears in an area of roughly 60 km2 in Japan’s Ashio-Nikko mountains, the research team was able to directly observe the bears’ food preferences and habits. They made these observations from April to July in both 2014 and 2014, keeping a distance of at least 200 meters from individual bears.

The scientists would document what plant species the bears consumed, then study their nutritional content. Although food availability was a factor, it seemed like the bears were more attracted to food that was high in protein while being low in fiber. The researchers believe this is because the bears’ stomachs would have a hard time digesting fiber. Furthermore, this protein-rich diet helps rebuild muscle mass that was lost over hibernation while also replacing fat the bear burned during its winter slumber.

The study details how the bears actually changed their food preferences as it got closer to summer, which means that the nutrients within their diets changed as well. Bears would begin the spring by eating grass and then leaves as trees began to experience the leaf flush. Flowers were also on the menu as they began to bloom. During the early summer, the bears would mainly eat ants as well as bees, supplementing this insect diet with grass and sika deer carcasses.

When the researchers went back and checked the nutritional content of the same plants the bears had been devouring a few weeks previously, they discovered that these plants were now lower in protein and richer in fiber.

The authors also believe that the calories in different foods were not related to the choice of food, so the key factor for determining a bear’s diet must be the amount of protein, as long as the fiber content is low enough to be digested.

Gaining this type of insight into the food habits and preferences of different animals is integral to understanding how they survive and how we can help maintain and preserve their habitats. Further research could provide even more information on the feeding habits of these interesting creatures.