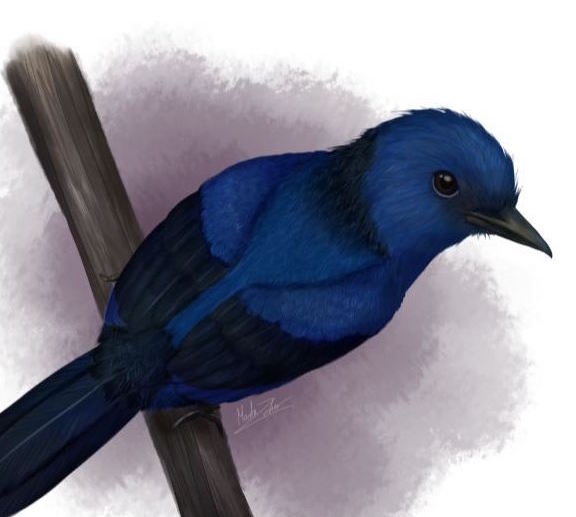 From vibrant reds, greens, yellows, and blues, birds have some of the most striking and distinct colorings compared to other animals.

Melanin pigment is the key to these vivid feathers, and it is responsible for black, reddish brown, and grey feathers as well as iridescence.

Luckily, melanin pigment can fossilize, whereas feathers, which are made of keratin, are not preserved in prehistoric fossils.

Researchers can use the fossilized pigments to help determine the colors of ancient birds, but the color blue remained evasive, and it was not known if blue could be preserved like other pigments.

In a new study, researchers from the University of Bristol have identified blue color tones in prehistoric birds and discovered which birds were predominantly blue.

Birds use the melanin pigments to create both structural iridescent and non-iridescent colors. The melanin packages called melanosomes can look like small spheres to cylinders and measure less than one-thousandth of a millimeter.

By examining the melanosomes in fossils, researchers can reconstruct the color of the feathers.

But blue is a non-iridescent structural color and difficult to reconstruct. If a bird has blue coloring, its feathers contain an array of cavities that scatter blue light. The only way to determine a blue bird’s coloring is the dark melanin that absorbs unscattered light.

The researchers discovered that the melanosomes in blue feathers are distinctly different from feathers that are black or brown, but similar to those found in grey feathers.

After comparing modern birds and their feather colors to closely related fossil specimens, the researchers were able to determine that the prehistoric bird Eocoracias brachyptera was blue.

“The overlap with grey colour may suggest some common mechanism in how melanosomes are involved in making grey colouration and how these structural blue colours are formed,” said Frane Barbarovic, the leader of the study. “Based on these results in our publication we have also hypothesized potential evolutionary transition between blue and grey colour.”

Blue, although a common color in the animal kingdom, is still somewhat of a mystery to biologists as far as what purpose it serves for some species.

By having a better understanding of which ancient birds were blue, researchers may be able to piece together the evolutionary purpose and advantages blue coloring provides birds.

The results of the study were published in the journal Interface.

Image Credit: Reconstruction by Marta Zaher, PhD at the University of Bristol