Under the skin: The fascinating lives of botflies • Earth.com 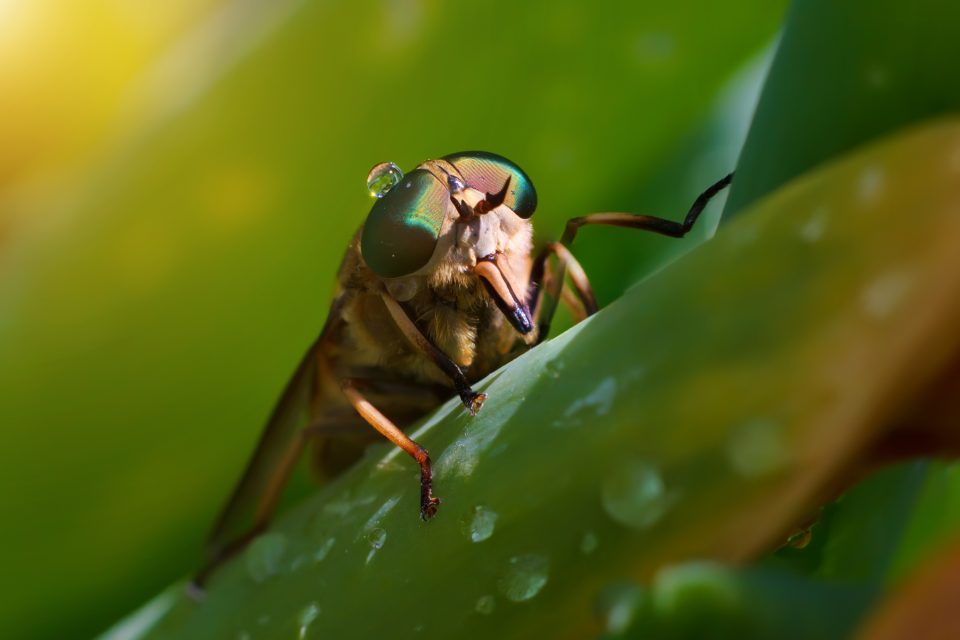 Under the skin: The fascinating lives of botflies

Old Blue Eyes may not have been thinking of botflies when he crooned, “And each time I do just the thought of you/Makes me stop before I begin/’Cause I’ve got you under my skin,” but the sentiment could just as easily apply to Western travelers returning from countries such as Belize and Bolivia with uninvited guests squirming happily under  their epidermis. Many may wish they had eschewed the fantastical sights of the rainforests of South America and boarded a plane to a less exotic destination when what seemed like a simple mosquito bite begins showing signs of life.

Indeed, reports of travelers who have picked up botflies abound in news reports from around the world. Botfly infections, a form of myiasis, or fly parasitization, typically first present as an irritated lump like a bug bite, and indeed, most botflies picked up by humans are in fact deposited on their skin by mosquitoes and other blood-suckers. In a behavior known as phoresy, female botflies dragoon mosquitoes into their bizarre reproductive cycle, gluing eggs to them and setting them free to seek a host.

When the mosquito or fly or tick lands on its victim, the eggs immediately hatch, triggered by body warmth. (Per some sources, they hatch while still attached to the vector and drop onto the skin when their transport vehicle lands.) The maggots either make use of the puncture created by the mosquito or any other openings in the skin, such as hair follicles, and burrow in. Quite tiny at birth, over a period of up to three months, they grow to sizes approaching an inch. People typically notice them when a bug bite doesn’t heal and may feel the maggots shifting under the skin, which can be excruciatingly painful due to the backward-facing hooks circling the insect’s body. Some may even notice the spiracles, or breathing tubes, protruding from the lesion, looking for all the world like eyes, though they are in fact located on the animal’s rear end.

The species that most often infects humans is the human botfly, Dermatobia hominis, native to South and Central America. It even occurs in the U.S. on occasion. It goes through three larval stages, or instars, inside the human body. Underneath the skin, it subsists on dead skin cells, white blood cells, and exudates, or secretions. As repulsive and unpleasant as it is, it rarely causes significant complications. (It may, however, burrow into rather uncomfortable places; in rare cases, larvae have been extracted from both male and female human genitalia.)

The method of removal typically entails the administration of local anaesthetic followed by surgical excision, after which the hole, or warble, heals over in short order. In some cases, the breathing hole has been covered in petroleum jelly or nail polish to suffocate the creature or force it to come out. One folk remedy suggest the placement of bacon over the wound; though some contend that the bacon itself entices the maggot to emerge, it is likely that it simply cuts off the air supply.

Because the larva excretes antibacterial compounds, the wounds don’t tend to become infected. And when it is ready to pupate, it releases numbing substances that allow it to squeeze through the tiny pore in the skin through which it breathed without attracting notice. Once outside the body, it drops to the ground and shortly thereafter turns into a puparium, a pupae encased in the skin of the final instar. A number of scientists have used their own bodies as laboratories and verified this process. The puparium develops in the soil before metamorphosing into an adult. Many claim that the adult fly resembles a bumblebee. While it is similar in size to a bumblebee, to this writer, it has none of the bee’s charm and simply looks like a large fly in a ratty fur coat. The adult form lacks a mouth and does not feed; it lives perhaps a week.

As if all of this weren’t appalling enough, the other members of the family Oestridae (botflies and warbleflies) have even more nefarious strategies for infecting their hosts. The four subfamilies in the Oestridae, Cuterebrinae, Gasterophilinae, Hypodermatinae, and Oestrinae, until 1987 considered separate families, each have their own devious means of gaining entry to their hosts bodies.

The Cuterebrinae, to which Dermatobia hominis belongs, contains many species of botflies that infect rodents. Most do not deposit their eggs on mosquitoes or other flies as the human botfly does. Instead they stake out the nests of their prospective hosts and lay eggs around them. When the unsuspecting rodent waddles by, its body heat triggers the hatching of the egg and the larvae hops on. It find an orifice, usually the mouth or nose and migrates through the body until it finds a suitable location to set up shop under the skin. Strangely, infected individuals in a population of white-footed mice (Peromyscus leucopus) were found to be more healthy than uninfected individuals. Though a causal relationship was not firmly established, it may be that infected mice spend more time finding high-nutrient foods to compensate for the loss of energy due to their hitchhikers.

The habits of the Gasterophilinae, or horse botflies are, if possible, even worse. Various species lay their eggs on the legs, lips, and noses of horses and other ungulates. When the horse or other animal cleans itself with its tongue, the eggs are transported to the digestive system, where they hatch and firmly attach themselves. They live there for up to 9-11 months, after which they release their grip on the stomach or intestinal wall and are excreted. They then pupate. Horse owners are instructed to apply fly repellent to preferred egg deposition sites and invest in “bot knives”, which are used to scrape the visible eggs of the hair shafts, to which they are firmly attached. Surprisingly, most horses tolerate these infestations without many symptoms, though heavy infestations may cause stomach ulcerations and irritation, and if the bots migrate to the wrong part of the body, more severe symptoms and even death can result.

The Hypodermatinae, or warble flies use yet another uniquely distressing pathway. These pests, which are particularly noxious to livestock such as cattle, are also called gadflies—the origin of the idiom used to describe irritating critics. They burrow into the skin of their host and migrate through the body using nerve and muscle pathways. They have been found in the spines of infected animals. Ultimately, they settle under the skin like other botflies. Cattle attempting to avoid the creatures jump about wildly in a behavior known as “gadding,” noted in the writings of Virgil. In addition to the obvious discomfort caused to the animal itself, this causes hundreds of millions of dollars in economic damage to meat and hides. The term “fly-blown hide” refers to the holes left in the skin by botflies, which reduce the quality of leather. One species, the reindeer botfly, is thought to, along with other species of botfly, influence the migration patterns of its host and will track the fleeing reindeer for many miles. In a particularly repulsive twist, Inuit people who depend on the reindeer for food have long considered the larvae a delicacy.

Before we detail the habits of the final subfamily, the Oestrinae, I’ll give you a moment to find a suitable receptacle to vomit into. Perhaps too late. The females of the Oestrinae, or nasal botflies, produce live young, which they eject forcefully into the nasal passages and mouths of their hosts, which include deer, reindeer, and sheep. They don’t even land; they just fly by and spray globs of maggots right into the poor animals’ faces. Deer have learned to be wary of these creatures, burying their faces when they see them approaching and sneezing hysterically in an effort to rid themselves of larvae that do land. The flies have, in turn, developed sophisticated stalking behaviours in which they approach the deer from behind. This appears to have been an effective adaptation; in some populations of deer, infection rates approach 100% during peak botfly season. Though harmless in small numbers, they may ultimately suffocate the animal if too many attach in the breathing passages.

While you recover from the dry heaves, ponder this slight less sickening fact: one scientist erroneously posited in the early 20th century that botflies were able to fly at speeds of up to 818 mph. Not so, though they are remarkably fast. However, I suspect that visitors to the American tropics may in fact exceed those speeds in their rush to grab a can of bug repellent after reading this.