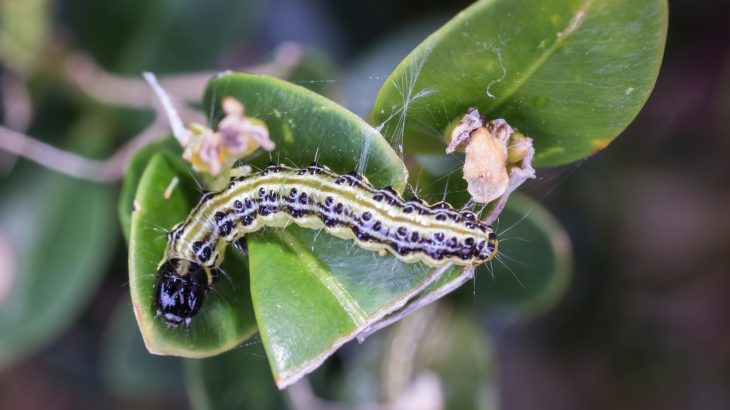 The box caterpillar, Cydalima perspectalis, is making quick work of England’s hedgerows as the pest has made the top of the Royal Horticultural Society’s “most wanted list.”

Native to East Asia, the caterpillar was first spotted in Europe in 2007 and was discovered in the UK in 2011. Now there are reports of box caterpillars all across Wales, Scotland, Ireland and Northern Ireland as well as in Britain.

In its larval stage, the box caterpillar is a menace to box plants which adorn many stately home gardens and are often used for topiary displays and hedgerows.

Cydalima perspetalis can strip a box plant bare, and unfortunately, the invasive species are running free. While feeding on the leaves of box plants, the caterpillar covers itself and its feeding area in a blanket of webbing.

There are limited options for controlling and eradicating the pest, and homeowners are instructed to simply remove them from plants by hand.

Box caterpillars have destroyed large areas of wild box plants and many UK homeowners are rightfully concerned about the potential damage the pests could inflict on their iconic hedges.  If the caterpillars spread to wild trees in the UK, box plants could be at risk of being completely wiped out.

“We have 4.5 million members, who are allowed to ask us questions,” Stephanie Bird, an entomologist of the Royal Horticultural Society, told The Times. “Based on the questions we work out the number one inquiry. Historically slugs and snails are always top. This year it is set to be the box caterpillar.”

In their native regions, box caterpillar populations are kept in check thanks to hornets who feed on the bugs.

European Boxwood and Topiary Association are continually monitoring the plants, and the Royal Horticultural Society is working to find effective methods to safely eliminate and control invasions.