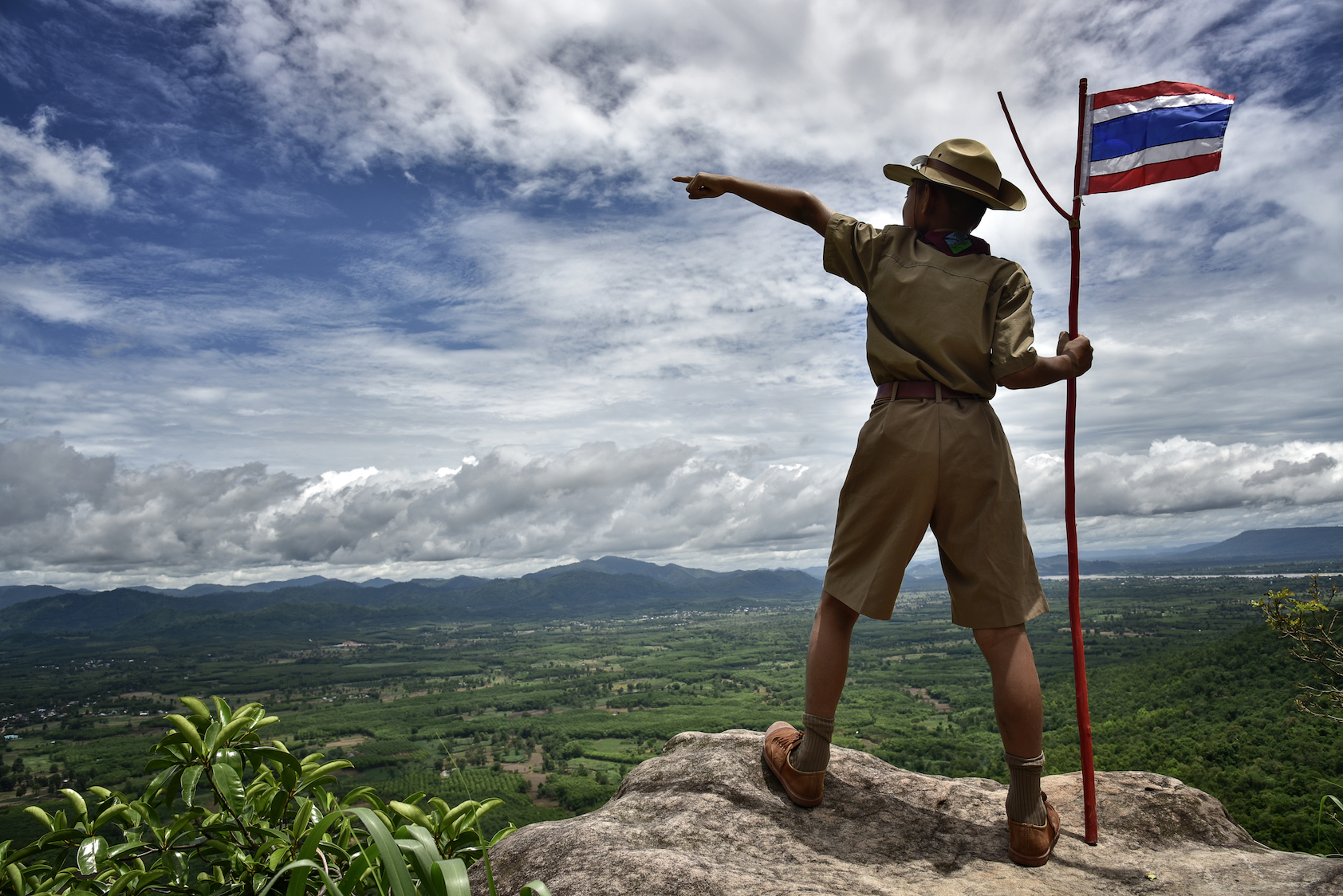 From the beginning, mainstream conservation in America has been seen as a man’s game.  Nowhere is this more evident than in the life of Teddy Roosevelt and his contemporaries.  Roosevelt was in any estimation a man’s man, a war veteran, a hunter and a cheerleader for his own philosophy of the ‘Strenuous Life’.

Though not often thought of in this light, scouting was perfectly aligned with Teddy Roosevelt’s philosophy, including his conservation ethics.  Roosevelt is the only person to ever be awarded as scouting’s “Chief Citizen Scout” in 1910, when the organization was founded in the US. Roosevelt was honored and served on a local scout council, Roosevelt himself said of the organization:

“More and more I have grown to believe in the Boy Scout movement. I regard it as one of the movements most full of promise for the future here in America. The Boy Scout movement is distinctly an asset to our country for the development of efficiency, virility, and good citizenship. It is essential that its leaders be men of strong, wholesome character; of unmistakable devotion to our country, its customs and ideals, as well as in soul and by law citizens thereof, whose wholehearted loyalty is given to this nation, and to this nation alone.”

Similar to Teddy Roosevelt, scouting’s original founder Lord Baden Powell of Britain lived a life of outdoor adventure and war.  Powell spent much of his youth in boarding school, where he would sneak into the woods and hunt rabbits, cooking them over a small, smokeless fire and eating out of doors.

Originally Powell intended just to write a guide on scouting and military espionage but it turned out many young boys read his book as well.  Baden Powell in response to his young fans wrote, Scouting for Boys, published in 1908.  The book was intended to instruct boys in outdoor skills as well as citizenship.  It’s not too hard to see how even in its infancy Boy Scouts fostered military preparedness.  Scouting for Boys was followed up by an experimental summer camp on Brownsea Island, Britain.

Here’s where the history of scouting gets a little strange.  In 1909, the first Boy Scout Rally was held at the Crystal Palace in England.  During the rally, a group of girls showed up wearing uniforms and saying they were Girl Scouts.  Inspired by the girls show, Powell along with his sister formed the Girl Guides organization. Today most scouting organizations across the globe are co-educational, including boy and girl members.  Until recently, Boy Scouts of America was different. Although inspired by Baden Powell, Girl Scouts of the United States of America is a separate organization from Boy Scouts of America.

Being separate organizations, Girl and Boy Scouts have different although sometimes overlapping ideals and goals.  Boy Scouts has a long history working with government agencies and others to promote conservation. In 1924, 32 Eagle Scouts camped in Yellowstone National Park’s backcountry and volunteered their labor building six miles of trail.  The next year, Eagle Scouts worked as trail crews in Glacier National Park. The trend continued with scouts forming partnerships with different land management agencies. I help build trails as a Boy Scout and participated in several Eagle Scout projects cleaning up public lands, as well as improving camping and hiking infrastructure.  Boy Scouts has merit badges such as Environmental Science, Bird Studies, Backpacking, Sustainability and many more celebrating the outdoors and natural sciences.

Scientific American reported in July 2016 that Girl Scouts environmental education is having real world impacts.  Girls Learning Environment and Energy GLEE for short, teaches girls how to curb their energy usage at home and encourage the rest of their family to do the same.  A study showed that girls in the GLEE program increased their energy saving habits by 49% and their parents increased their saving habits by 12%.

A Girl Scout Leader’s Guide from 1955 said, “The Girl Scout approach to nature is not through collections of flora and fauna but through understanding of living things, appreciation of their beauty, and conservation of them as they live.”  The Girl Scouts like Boy Scouts participate in volunteer projects, both environmental and humanitarian. Girl Scout badges include several dedicated to outdoor art, Eco Camper, Animal Helpers, Voice for Animals, Animal Habitats, Hiker and more that encourage outdoor recreation and environmental learning.

Boy Scouts is changing, though and it may define the future of Girl Scouts in America as well.  In October 2017, The Atlantic reported that Boy Scouts of America is letting in girls, though as I already noted the majority of scouting organizations worldwide already allowed girls.  In America though, scouting has been reluctant to follow the trend, this may be due in part to Boy Scouts of America’s close ties to the LDS church. Boy Scout troops are generally chartered by existing organizations, often churches, the Mormon Church being one of the most common sponsors.

The Church of Jesus Christ of Latter Day Saints has mostly adopted Boy Scouts as a youth program for its boys instead of creating its own youth organization.  The involvement of the LDS church along with other groups has largely kept Boy Scouts extremely conservative as an organization. The Boy Scouts initially banned gay and transgender scouts, but in 2014 removed its ban on gay scouts.  The LDS church and Boy Scouts of America issued a joint statement that they will be ending their partnership earlier this year. The statement states that the reason for the separation is because church members are increasingly living outside of the US.  I don’t doubt that the greater inclusion in scouts has something to do with the break as well. In 2015, the church said it was deeply troubled by scouting’s decision to allow openly gay scout leaders. The Boys leaving with the Mormon Church represent about 18.5% of overall national members.

Girl Scout executives have accused Boy Scouts of trying to steal their membership away by recruiting girls as numbers dwindle in both groups.  Girl Scouts asserts that it is best equipped to train and empower female leaders and will continue to do so. Girl Scouts it’s important to note has also been tied with more liberal politics, forming friendly bonds with Planned Parenthood and embracing scouts with no belief in God.  Boy Scouts still won’t allow scouts who are openly atheist or agnostic to be members in their organization.

I had a chance meeting on top of a mountain in Colorado with a local scout executive that gave me hope.  The scout leader talked about international travel, about how he and his wife adopted children from Thailand.  The man was also deeply proud that scouts was changing and becoming more inclusive. I also was happy to meet this man climbing mountains in Colorado, enjoying the outdoors, communing with the environment.

As I reflect on scouting, I think what it’s meant to me.  Mostly I grew to love and feel comfortable in the outdoors.  An interest in nature was fostered, a love of the environment kindled.  I know Eagle Scouts who have degrees in Environmental Science and have spent winters skiing as much as possible.  It’s true I also have known conservative Eagle Scouts quick to join the military and happier hunting coyotes than saving species.  I have no first-hand knowledge of Girl Scouts in America but the organization seems to have grand ideals and also an orientation of educating girls in the environment and outdoors.

Since Scouts allowed gay boys into their membership, the number of scouts has declined.  Breakpoint reports a fall of 6% in membership after the change, the largest drop in its history.  The decline between 2013 and 2016 was a decline of 10%. Girl Scouts itself has lost about 10 million members from 2003 to 2014.  The two organizations seem at odds with each other and in some ways it may be a struggle for survival. I see a different possibility though.

I could hope that the former Boy Scouts of America andGirl Scouts of the United States of America could form a new whole comprised of the better qualities of both organizations.  We need scouting groups, we need organizations that promote primary experience and learning in the outdoors. If we don’t raise women and men that care about the planet, that involve themselves in the outdoors, we are doomed.

Scouting has great potential.  Letting go of old prejudice is a good step forward.  I hope that along with those exiting the scouting movement, a new group will enter.  Scouting has the potential to educate millions of young minds in environmentalism and social justice.  I hope that scouts can rise to the occasion and become what it has promised to be.