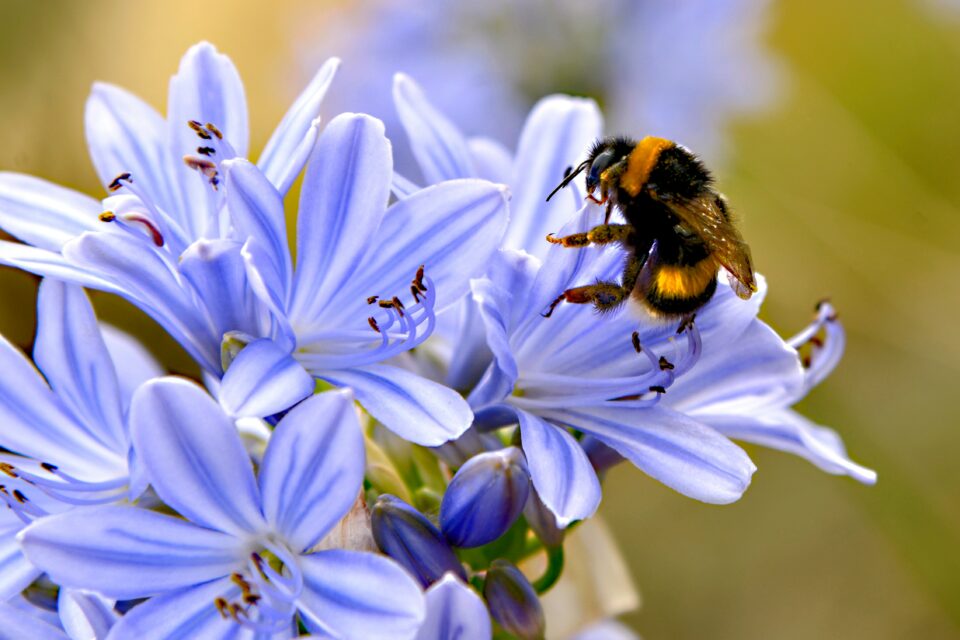 While bumblebees fly from flower to flower, they probably don’t waste much time learning the details of each one, but rather focus on the basic color of the landing area. This is one of the findings of new research, led by scientists from the University of Exeter.

The researchers trained bees to forage on artificial flowers consisting of circles of blue or yellow, or half and half, with sugar solution in the center. The flowers were positioned upright, meaning that as bees flew in to land, they saw mostly the bottom half of the colored circle. The team then tested the bees’ approach behavior when they were presented with new and different flower options on their flight paths.

During these tests, no sugar solution was provided in the artificial flowers. The bumblebees were therefore not attracted to the flowers by the presence of sugar. Instead, they flew around in front of the flowers, making choices about where to land. This allowed the researchers see which color they were drawn to.

The results showed that, when faced with an artificial flower that had a different arrangement of the two colors from the one used in training, bees paid most attention to whatever color was found on the lower half of the flower they had been trained on and were used to. This suggests that they learned only this basic attribute of the flower, rather than inspecting and memorizing details of the whole flower before landing.

“We know bees have the cognitive capacity to learn a lot of information about a flower,” said Professor Natalie Hempel de Ibarra, Associate Professor at Exeter’s Centre for Research in Animal Behaviour. “However, our study suggests a simple, low-effort form of learning is good enough in some situations.”

“The bees in our experiments extracted just the information they needed, rather than learning everything that was available to them,” said study first author Dr Keri Langridge. “Like humans, most animals like easy forms of learning. Why learn a hidden route to the top of the hill when one could simply follow a trail with a big color sign?”

Some bumblebees were trained with a circle split into two uneven color parts – either mostly yellow or mostly blue, which changed their flight patterns. The test results in this case were more complex than after learning on circles that were split 50/50. This suggests that the bees had paid some attention to contrast edges as well as to color during training flights.

Professor Hempel de Ibarra said the study findings may provide insights about the evolution of colorful patterns in flowers, particularly those that can help pollinators such as bees to land quickly and safely.

The results of the study are published today in the journal Frontiers in Physiology.