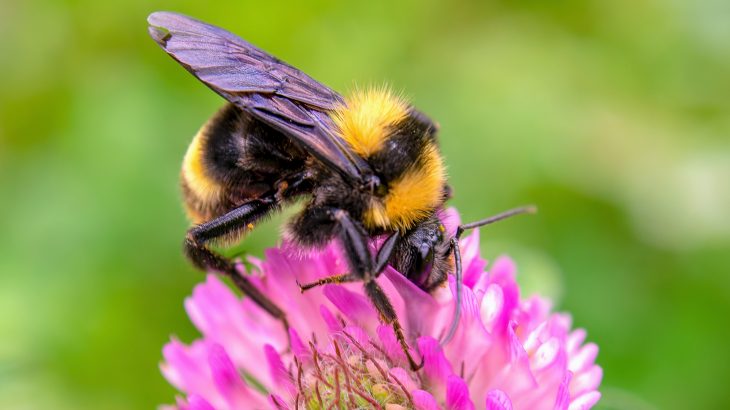 Bumblebees in low quality habitats are more susceptible to disease

Bumblebees in low quality landscapes have higher levels of disease pathogens, according to a new study led by Penn State. Increased pathogen loads were also found among bumblebees in areas with higher numbers of managed honey bee hives.

The low quality habitats observed in the study were characterized by a relative lack of spring flowers and suitable nesting areas.

The researchers explained that the findings can be used to inform management practices and support the conservation of bee species that provide essential pollination services in natural and agricultural ecosystems.

“Recent worldwide declines in wild and managed bee populations have been attributed to several factors,” said study lead author D.J. McNeil. “For example, extensive habitat loss and degradation has led to a lack of flowers and nest sites, which in turn has contributed to the loss of wild bee abundance and diversity.”

McNeil noted that more recently, some bee losses – especially among honey bees and bumblebees – have been blamed on rising levels of novel bee pathogens, perhaps exacerbated by other factors that weaken bee immunity or resistance.

“Many of the factors known to undermine bee health, such as poor nutrition or exposure to pesticides, can increase susceptibility to disease. Bees are more likely to be nutritionally deprived in landscapes with fewer and less diverse flowering plants, and poor nutrition can reduce the immune response and increase pathogen and parasite loads.”

According to study co-author Professor Heather Hines, the incidence and loads of a particular pathogen or parasite in bee populations are likely influenced by the composition of bee communities as well. She explained that the incidence of viruses and parasites in wild bumble bees was higher in the presence of honey bee colonies, which often harbor higher loads of pathogens that are transmissible to native bees.

“Given all these interacting factors, disease prevalence and virulence can be challenging to predict in wild bee populations,” said Professor Hines. “Our study is among the first to use data from a large geographic scale to evaluate the relative role of landscape features on the distribution and loads of key pathogens and parasites in wild bees.”

The study was focused on the common eastern bumblebee. The team collected specimens from diverse sites across Pennsylvania, including 38 of the state’s 67 counties.

The researchers screened for three pathogens known to infect bees: deformed wing virus, black queen cell virus, and Vairimorpha – a microsporidian parasite. They also looked for the expression of a gene that regulates immunity.

McNeil said results of the study highlight the need to maintain and create high quality landscapes, such as those with abundant floral and nesting resources, to support healthy wild bee populations. The findings also draw attention to the value of spring floral resources.

“Our results suggest that it may be possible to predict potential risks from pathogens and parasites based on these landscape indices, which can help inform decisions as to where habitat restoration and conservation practices should be applied,” said McNeil. “This is particularly timely in light of widespread population declines in many insect groups, especially pollinators like bumblebees.”

The researchers hope to incorporate this information into Beescape, an online tool that allows people across the United States to evaluate their landscape quality.