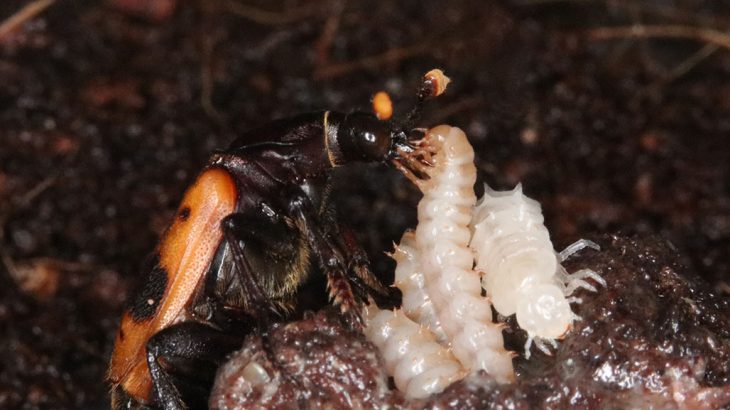 In a new study published by Cell Press, researchers have discovered that the burying beetle feeds its larvae using the same mouth-to-mouth regurgitation technique as birds who share a meal with their young.

The team also found that the burying beetle larvae can sense when the mother beetles release a pheromone which indicates that they are ready to feed. The detection of this pheromone, 2-phenoxyethanol, causes the larvae to start begging for food.

“The study of parental care is mainly conducted on birds and mammals, but the complexity of their parent-offspring communication sometimes becomes an obstacle for understanding the evolutionary process of the system,” said study first author Mamoru Takata, a postdoctoral research fellow at Kyoto University. “The study of a species with a simpler communication system is needed, and burying beetles are an ideal group.”

The burying beetle, Nicrophorus quadripunctatus, breeds inside of dead animals and then scavenges food from the carcass. The larvae are fed as often as three times per hour during the first two days after hatching.

Takata and his team set out to examine how the larvae know when to beg for food. The experts determined that the pheromone emissions were indicative of feeding times. This system allows the larvae to make better decisions, instead of begging and wasting energy before the time is right.

The researchers also found that the pheromone has antimicrobial properties, which suggests that the compound initially evolved as a form of shared immunity. Today, the pheromone appears to play a dual role, assisting with parent-offspring communication.

An animal carcass provides a limited amount of food, and the beetles are aware when there are too many larvae to support. “They can estimate the amount of carcass, and if the number of larvae (is) too much for it, they eat or just kill some of the larvae by biting,” said Takata.

In addition, there are times when male beetles will invade a carcass and kill larvae that are not their own. “But please note that the cannibalism is limited to the situation, and after regulation, it seems the beetle family is almost peaceful.”