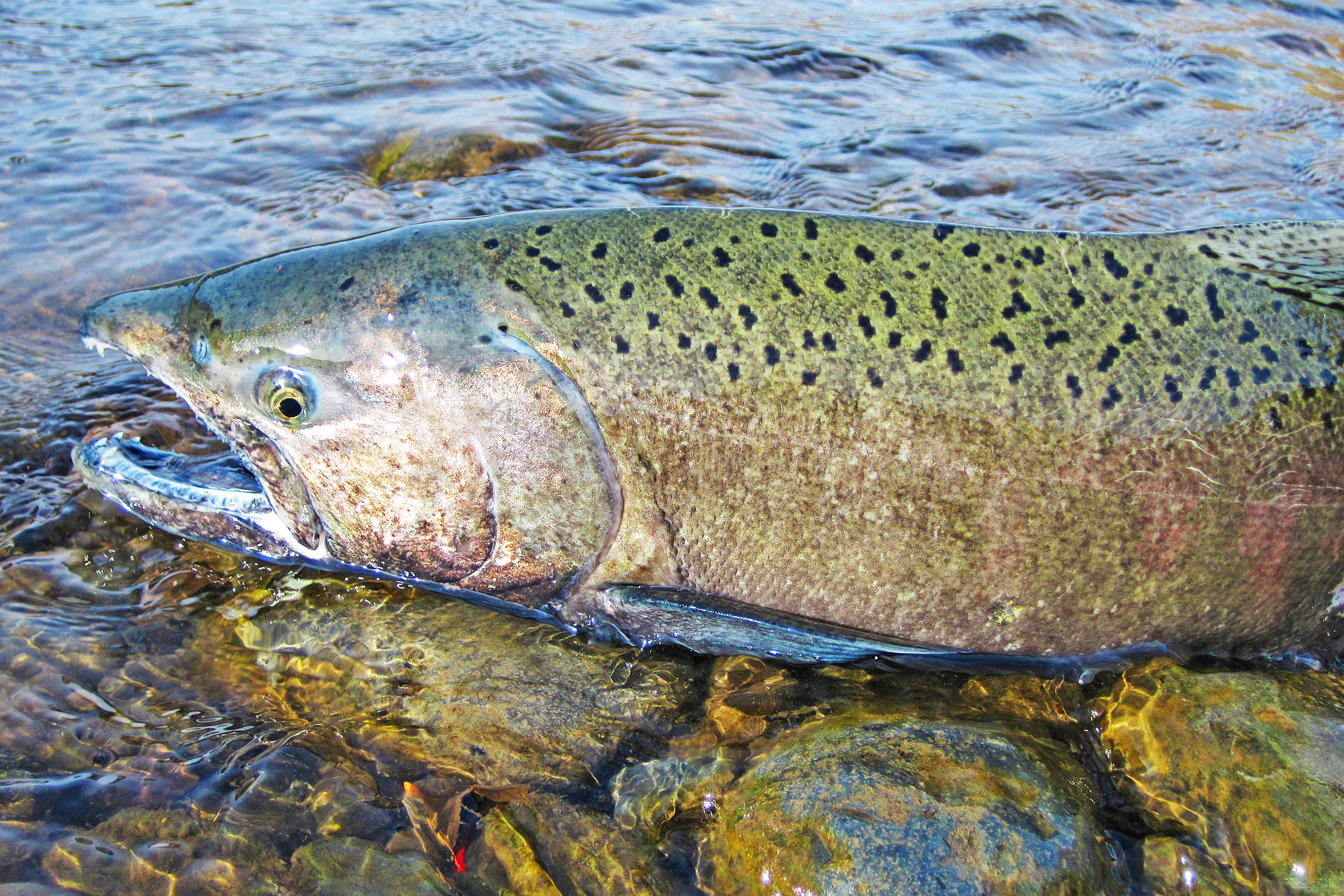 The sleek, flapping salmon that fishermen hauled aboard the rolling Salty Lady charter boat near the Golden Gate Bridge were the survivors of the survivors.

After five years of drought, the native Chinook salmon that the men were reeling in this past week were there only because state and federal agencies have stepped in to do much of the salmon-raising that California’s overtapped rivers once did. Most of the fish were born at the agencies’ hatcheries and carried in trucks for release downstream.

As the men watched and waited for one of their fishing poles to dip sharply, Victor Gonella, president of the Golden Gate Salmon Association, remembered his childhood in the 1950s and 1960s when the salmon population was healthy enough that he could fish most months.

Gonella recounted fishermen struggling to land salmon that had made their way to the Pacific Ocean from the San Joaquin River in particular, the fish powerful from muscling their own way from river to ocean.

These days, he said, “if it weren’t for these fish that were trucked, we wouldn’t be fishing.”

The San Joaquin River has been dry for dozens of miles at a stretch for decades, its water diverted to booming farms and cities.

With the drought bringing one of the driest periods in California’s history, federal and state authorities increasingly have had to intervene mechanically to carry out key stretches of the life cycle of salmon, whose numbers were already declining.

In 2014 and 2015, authorities reared millions of young salmon in artificial hatcheries and trucked them downstream to keep the fishing industry’s mainstay supply of fall-run Chinook salmon afloat.

Another kind of California Chinook salmon, the winter-run, won federal listing in 2015 as one of the eight U.S. species most in danger of imminent extinction, after too-low and too-warm water in state rivers all but wiped out the 2014 and 2015 populations of the youngest winter-run salmon.

Not all salmon from state and federal hatcheries are tagged, but on this day, after hours of fishing, two of the nine salmon that were caught bear the clipped fin and tiny metal tag of hatcheries.

Management of California’s river water is a balancing act that’s often described as fish versus farmers. With dams blocking more than 90 percent of the salmon’s original river habitat, agencies have struggled in the drought to release enough water at the right times to suit the needs of both crops and wildlife in the San Francisco Bay-Delta complex, the West Coast’s largest estuary.

Because the salmon grow, spawn and die in three-year cycles, the troubles of 2014 and 2015 made it “critical that everything go well this year” for winter-run salmon in particular, said Jason Roberts, a fisheries supervisor for the California Department of Fish and Wildlife.

So far, Chinook appear for now to have caught the critical break they needed, thanks to rain and snow from El Nino-related storms this past winter.

Chinook salmon are an anchor species in California, not just for the state’s estimated $1.4 billion commercial and sport fishing salmon industry, but for the health of land, river and ocean habitats. Because salmon divide their lives between the ocean and rivers, they provide food for animals ranging from orcas to bears and eagles. Once the fish die upstream, their decomposing bodies supply nitrogen that helps sustain forests.

Along with putting the winter-run salmon on the highly endangered list, federal authorities announced this year that they would formally review their management of key state waterways and reservoirs with regards to survival of native species.

Farmers and some fishermen envision a different future for salmon, with more machinery aiding their life cycle and less water.

Paul Wenger, an almond farmer and president of the California Farm Bureau Federation, has urged water managers, unsuccessfully so far, to consider widespread use of prototype mist incubators, touted to hatch larger numbers of salmon eggs in temperature-controlled machines using a fraction of the water the eggs would get in river beds.

Gonella, the fishing industry representative, thinks California’s hatcheries might have to be moved to the oceanside, eliminating young salmon’s ancient migration down rivers that now have too little water.

Environmental groups want agencies to go the other way, with less machinery and more water.

“The fact that these fish can no longer survive in the system that they’ve become genetically adapted to over how many centuries says something about how badly we’re managing the system,” said Kate Poole, a senior attorney with the Natural Resources Defense Council. “What we really need to focus on is creating healthy river conditions so these fish can survive and thrive in the wild.”