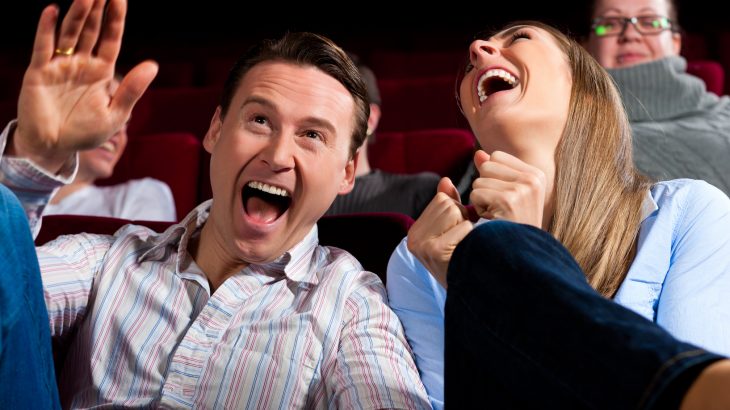 The laugh-track is a staple of television sitcoms, as canned laughter serves as the cherry on top of many a punchline.

In a new study, researchers from the University of College London set out to determine if a canned laugh track makes a joke funnier.

The answer is yes, according to the results published in the journal Current Biology, but laugh tracks are not as effective as real laughter.

“Historically, TV and radio programs were always recorded in front of a live studio audience: this allowed those watching and listening to feel part of the performance,” said Professor Sophie Scott, the lead author of the study. “However, as the audience reaction was natural, certain ‘comedy’ programs, which weren’t overtly funny wouldn’t get a long laugh, so TV and radio producers increasingly added canned laughter to prompt an audience reaction.”

For the study, the researchers selected 40 “dad jokes,” the name given to a kind of groan-worthy joke that usually plays on an obvious pun. The researchers assigned each joke a baseline rating from one to seven with seven being hilarious.

Some jokes in the study included, “What state has the smallest drinks? Mini-soda!” and

“What does a dinosaur use to pay the bills? Tyrannosaurus cheques”

Next, the researchers recorded a professional comedian delivering the joke. One recording of the joke used canned laughter at the end and another used real laughter.

Once the jokes were recorded, two groups of participants, neurotypical and autistic, listened to both versions of the recordings.

It was important to include both neurotypical and autistic individuals in the study because of how laughter is processed in the brain. While some developing children find laugh tracks enjoyable, autistic children are not as easily manipulated.

Overall, the canned laughter and real laughter made the joke funnier. There was a major difference in the baseline ratings and the ratings given by the participants after hearing the two versions of the joke.

However, the humor in a joke was only marginally increased using canned, pre-recorded laughter.

“What this study shows is that adding laughter to a joke, increases the humour value, no matter how funny or unfunny the joke is,” said Scott. “It also suggests we respond much better to spontaneous genuine laughter, rather than posed or canned laughter, showing the inherent human joy and value of a natural response.”

Both the neurotypical and autistic groups found that spontaneous, real laughter was better and rated the jokes higher compared to the canned laughter.

The autistic group gave the jokes higher ratings overall finding them funnier than the neurotypical adults.

“This research shows that while canned laughter does elevate the humour of a comedy, adding real laughter would get a better response,” said Scott. “This has been adopted in shows like Friends, which are recorded in front of an audience, with the real laughter amplified during editing for particular jokes that had been well received.”