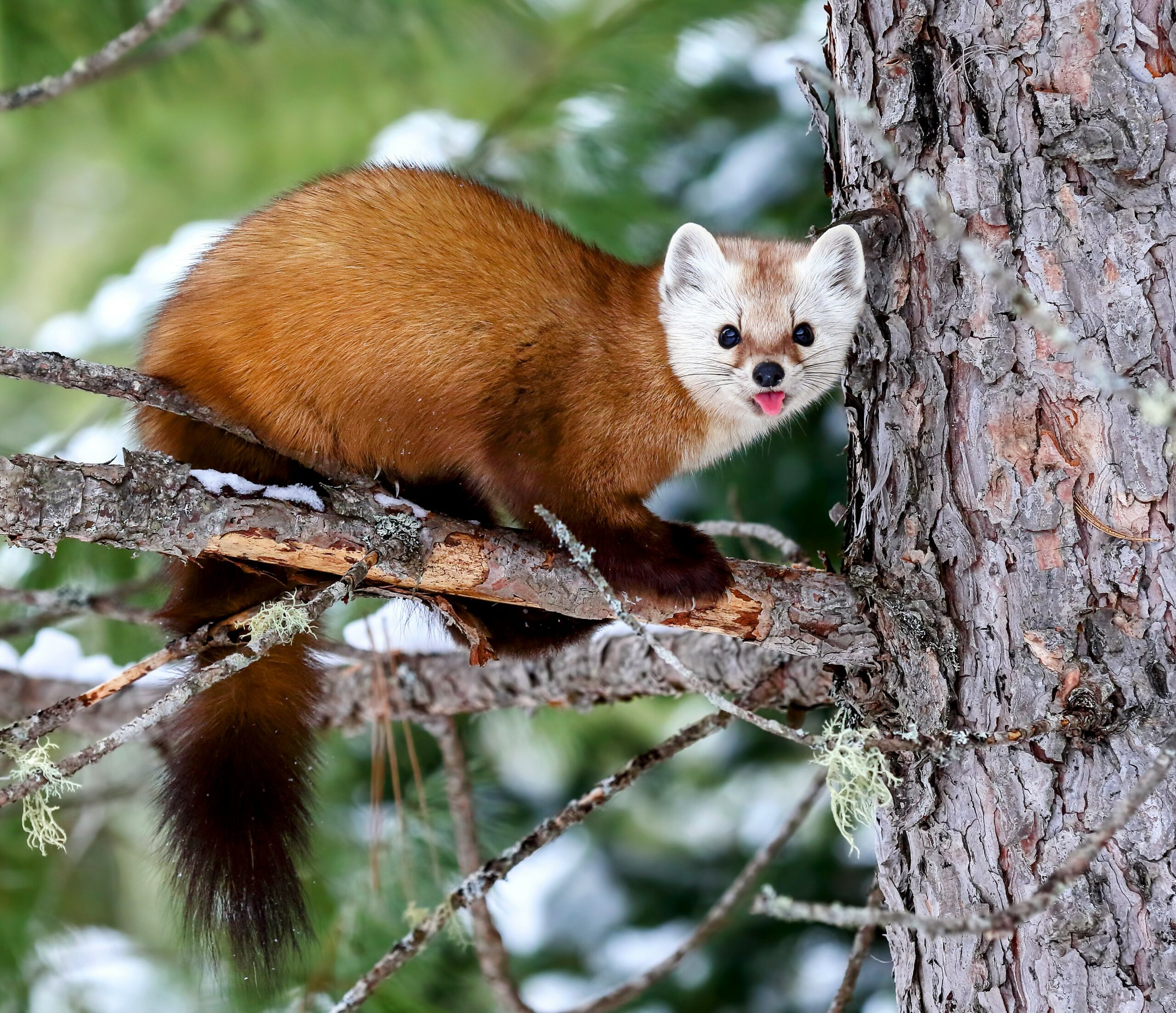 Gut microbes have received an increasing amount of attention in research literature recently, as scientists begin to understand the link between their diversity and the health of their host. Most of this research has focused on humans, where a functional gut microbiome has been associated with enhanced nutrition, immunity and mental health, among others. In contrast, not much research has investigated gut microbes in wild animals, despite the fact that microbial diversity may be an indicator of the health of wild animals and even of the environments in which they live.

A new study has now analyzed the microbial communities present in the guts of wild American pine marten (Martes americana) living in two different areas. Pine marten are carnivorous mammals of the family Mustelidae, related to weasels, ferrets and mink. They are found throughout Canada, Alaska and the northern United States. In the study, the gut microbiomes of marten living in a pristine habitat were compared with those of marten from a natural habitat that was more heavily influenced by human activity.

The researchers collected gut microbiome data from 21 marten for this study. Sixteen individuals were harvested during a legal trapping season, in an area that was closer to human habitation and influence. The remaining five were trapped safely and released in the Huron Mountain Club, which is a pristine forest area located in Michigan’s Upper Peninsula. The results, published PLoS ONE, identified distinct differences between the two groups of marten sampled.

“Our goal here was to determine how, if at all, human disturbance of a landscape affects the gut microbiome of American marten that live in that landscape,” says Diana Lafferty, co-lead author of the paper and an assistant professor of biology at Northern Michigan University. “And the answers here were pretty clear.”

“Specifically, we found that wild marten in relatively undisturbed environments have more carnivorous diets than martens in human-affected areas,” says Erin McKenney, co-lead author of a paper on the work and an assistant professor of applied ecology at North Carolina State University.

Previous studies on gut microbiomes have focused largely on the variation exhibited in humans and laboratory organisms. Only recently has interest grown in the host-gut bacterial associations in wildlife species, and very little research has been conducted comparing the gut microbes of conspecifics that inhabit different natural environments. Several factors have been implicated in shaping the gut microbial communities in animals, including host genotype, life history traits and behavior, social organization, health status, diet and the environment itself.

“In conjunction with our other work on carnivore microbiomes, this finding tells us the microbial ecosystems in carnivore guts can vary significantly, reflecting a carnivore’s environment,” McKenney says. “Among other things, this means we can tell how much humans are impacting an area by assessing the gut microbiomes of carnivores that live in that area – which can be done by testing wild animal feces. In practical terms, this work is revealing a valuable tool for assessing the health of wild ecosystems.”

The researchers found that the gut microbiomes of marten in the pristine forest of the Huron Mountain Club were clearly distinct from those of the marten harvested in other areas. The finding highlights an emerging tool that will allow researchers and wildlife managers to assess the health of wild ecosystems.

“The Huron Mountain Club is particularly important for this study, because it’s relatively pristine – one of the largest, primeval forests in the eastern United States,” Lafferty says. “That makes it an excellent juxtaposition to the 16 marten that were harvested, since those were collected in regions that are more impacted by human activity.”

“This reflects the fact that marten in relatively pristine forest are able to forage at a higher trophic level, meaning they occupy a higher place in the food web,” Lafferty says. “In other words, the marten in relatively pristine forest have a more carnivorous diet, whereas marten in areas where there are more people were more omnivorous. Basically, the findings tell us a disturbed landscape results in a significantly different diet, which is reflected in their gut microbiomes.”

“It’s also worth noting that we were able to trap and release the marten in Huron Mountain Club during the dead of winter because we designed and built custom box traps to protect them from the elements,” says Chris Kailing, a co-author of the paper who worked on the project while at Northern Michigan University. “That’s of interest because it makes winter sampling possible for future wildlife research even in harsh winter conditions.”