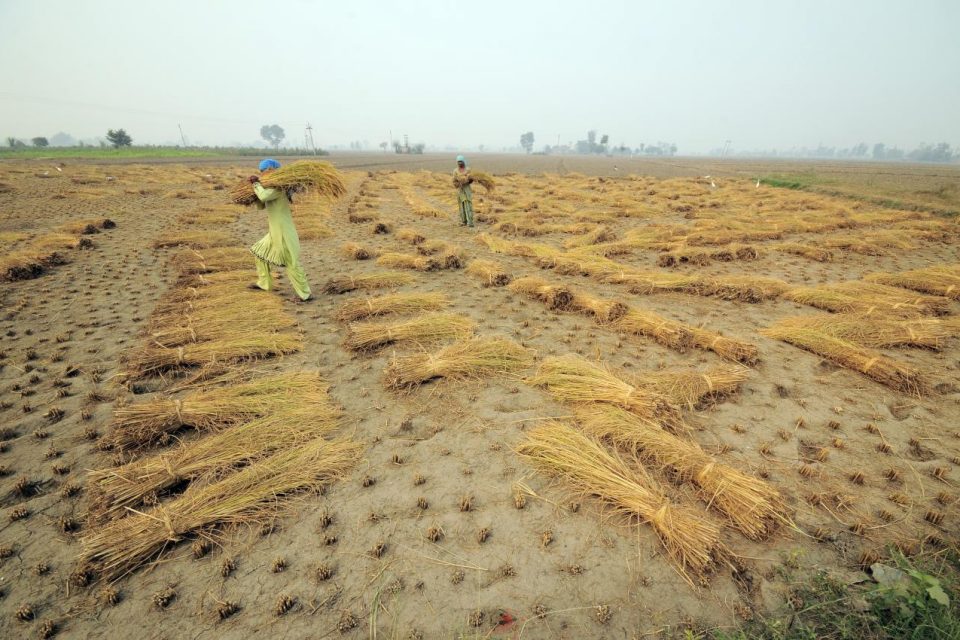 Changes in precipitation expected to impact vital crops worldwide. A new study has found that principal crops like wheat, maize, and rice will be impacted by future changes to rainfall patterns caused by climate change even if greenhouse gas emissions are drastically reduced.

Researchers from the International Center for Tropical Agriculture and the Universidad de Chile studied how permanent changes to regional precipitation across the globe will impact future crop production of wheat, maize, rice and soybean, four crops that represent 40 percent of the world’s total caloric intake.

While some regions are already experiencing irregular precipitation patterns and climate change is expected to cause changes to rainfall and temperatures, many of the world’s key crop regions have yet to undergo any imminent precipitation changes.

Already, some areas have new climate norms compared to the generation before.

The study, published in the journal Proceedings of the National Academy of Sciences, shows that 14 percent of land that produces key cereals will be drier and 31 percent will be wetter by 2040. 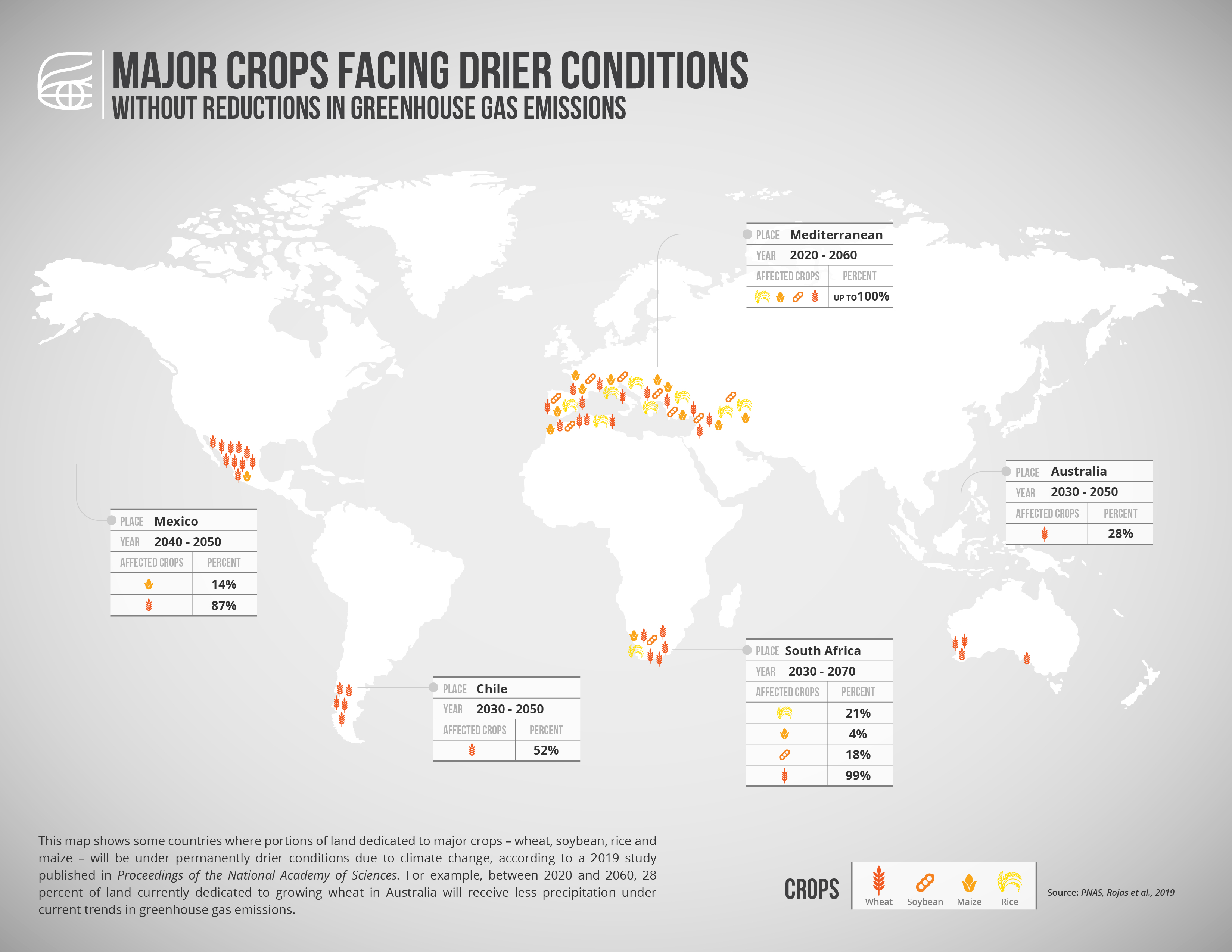 Under a medium climate mitigation scenario, the researchers found that dry regions like Australia, Southern Africa, and Southwestern South America will only get even drier.

With a business-as-usual scenario, these numbers only increase.

“These are definitely countries that will need to think rather quickly what they’d like to do with their wheat production,” said Maisa Rojas, the study’s lead author. “What we’re predicting are probably conservative years for time of emergence. Detectable precipitation changes are of course not only important for agriculture, but for water resource management more in general, so our results are relevant for other sectors as well.”

The researchers say countries like China and India will see an increase in precipitation no matter how much emissions are reduced, and the amount of rainfall could lead to increases in cropland and production. 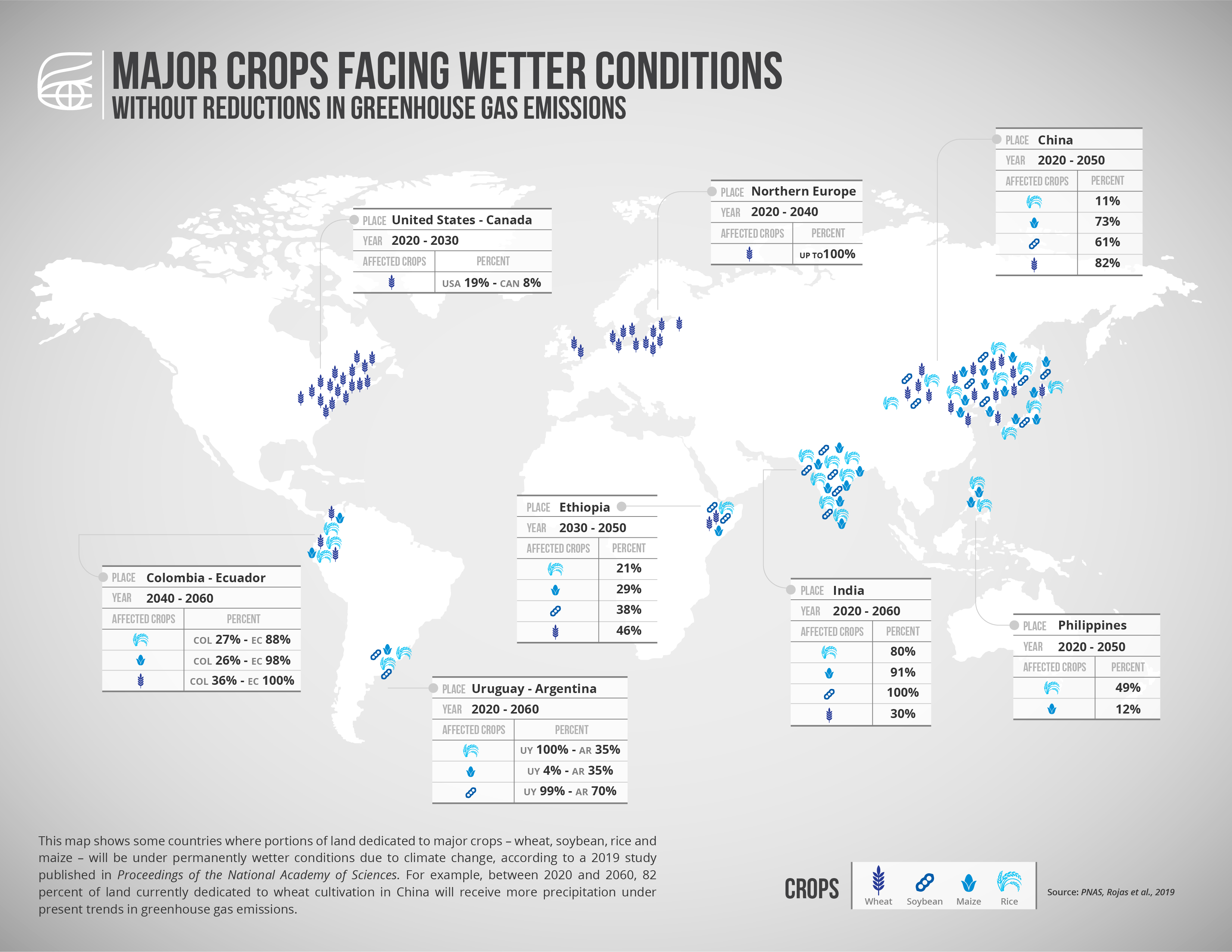 Wheat fields in the US, Canada, and Russia will also have higher levels of precipitation, but the researchers warn that the precipitation changes will also cause rising sea levels, higher temperatures, and increase the risk of floods.

Regardless of region or when the expected time of emergence is, farmers worldwide will see a huge change in precipitation in the coming years.

“Farmers growing crops in those areas are going to experience significantly different conditions than what they are used to,” said Julian Ramirez-Villegas, a co-author of the study. “They’re going to be completely outside their normal historical environments and many farmers are already struggling with historic variability.”

The results call for swift action and adaptation on the part of farmers likely to be hit hardest by precipitation changes.

While changes are expected under any emission scenario, if greenhouse gas emissions are significantly reduced under the Paris Agreement guidelines, it could buy farmers more time to adapt, and less land would be impacted.

“The precise nature of the changes is impossible to predict,” said Andy Challinor, a co-author of the study. “What this study tells us is that adaptation needs to be agile. For the first time, we can tell what changes to be ready for – and when they are expected – in our major crop-growing regions. Prior to this study, the rainfall changes experienced by crops were thought to be so unpredictable that no real advice could be given.”