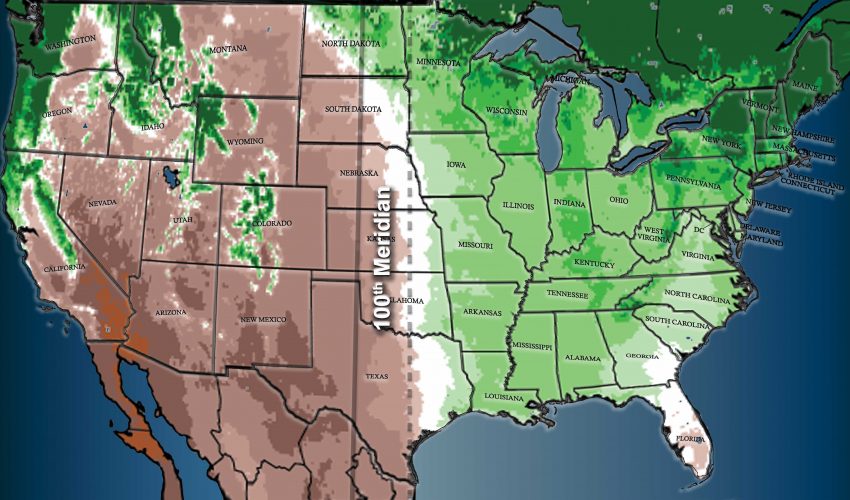 Researchers are reporting that the 100th meridian west, the longitude that forms an invisible boundary between the humid eastern United States and the arid western plains, is gradually shifting eastward due to climate change.

According to two recent studies, the dry climate of the West is expanding into the Midwest and will impact the future of farming and other pursuits. The experts have also established that this divide across North America is actually very real, with distinctive populations and agriculture on each side.

American geologist and explorer John Wesley Powell identified the 100th meridian in 1878. While the location of this longitudinal line is exact, the boundary that it represents is much more gradual.

In 1890, Powell wrote: “Passing from east to west across this belt a wonderful transformation is observed. On the east a luxuriant growth of grass is seen, and the gaudy flowers of the order Compositae make the prairie landscape beautiful.”

“Passing westward, species after species of luxuriant grass and brilliant flowering plants disappear; the ground gradually becomes naked, with bunch grasses her and there; now and then a thorny cactus is seen, and the yucca plant thrusts out its sharp bayonets.”

Richard Seager is a climate scientist at Columbia University’s Lamont-Doherty Earth Observatory and the lead author of both studies.

“Powell talked eloquently about the 100th meridian, and this concept of a boundary line has stayed with us down to the current day,” said Seager. “We wanted to ask whether there really is such a divide, and whether it’s influenced human settlement.”

Global-scale wind patterns cause rainfall to sharply decline to the west of the divide, while rainfall significantly increases east of the line. Powell explained that the drier conditions of the western plains are primarily due to the proximity of the Rocky Mountains, which block the majority of the moisture coming in from the Pacific Ocean.

Seager’s team has now identified two other contributing factors to the arid climate in the West. In the wintertime, Atlantic storms transfer an abundance of moisture into the eastern plains and into the Southeast, but this moisture does not travel far enough to reach the western plains. In addition, moisture from the Gulf of Mexico moves northward in the summer but then moves eastward.

According to the researchers, global warming appears to be shifting the 100th meridian west to the east. While rainfall has not changed much in the northern plains, temperatures are rising and increasing the evaporation process. Meanwhile, less rain is falling further south.

Data collected since 1980 indicates that the statistical divide between the humid and arid areas of the continent has now shifted closer to the 98th meridian, which is 140 miles east of the 100th meridian.

Seager acknowledged that there are year-to-year variations, but he said that aridity will likely continue to move eastward over the course of this century and ultimately lead to large-scale changes.

Farms in the East will have to consolidate, and farmers will need to find more suitable crops for the drier climate. Large regions of cropland will fail, and water shortages could become an issue for urban areas.

The studies are both published in the journal Earth Interactions.