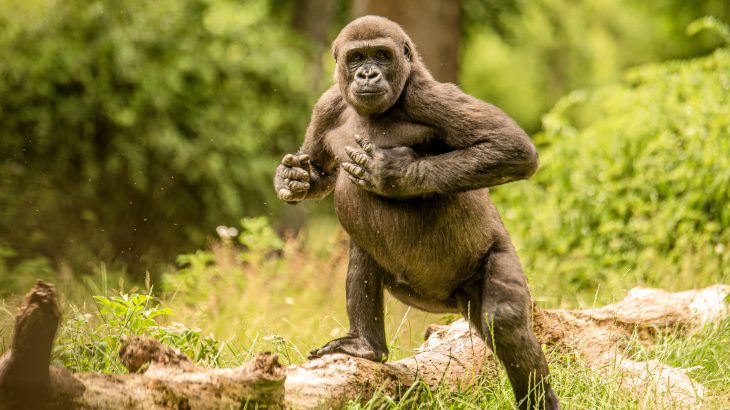 Experts at the Max Planck Institute for Evolutionary Anthropology have determined that chest beating conveys information about the identity and body size of mountain gorillas.

Chest beating is unique because it is not a vocalization, but a gesture that can be both seen and heard. According to the researchers, the beating sounds can be heard over one kilometer away.

The findings demonstrate how non-verbal behaviors may contribute to communication among mountain gorillas.

It has been widely assumed that gorillas beat their chests to attract females and intimidate rivals. To investigate, the researchers observed and recorded 25 adult male silverback gorillas in Volcanoes National Park that are regularly monitored by the Dian Fossey Gorilla Fund.

“The gorilla chest beat is one of those iconic sounds from the animal kingdom, so it is great that we have been able to show that body size is encoded in these spectacular displays,” said study first author Edward Wright.

Previous research conducted by Wright’s team showed that larger males were more socially dominant and more successful in terms of reproduction than smaller males. Body size is an important attribute among many animals because it tends to reflect strength and fighting ability.

Rival males most likely use the chest drumming sounds to size up their competition. This would help them decide whether to initiate, escalate, or retreat in aggressive contests with them. Females are likely using the same information to identify potential mates.

The researchers were surprised to find a great deal of variation in both the number of chest beats as well as the duration. “This hints at the possibility that chest beats may have individual signatures, but further study is needed to test this,” said Wright.