Chimpanzees found to make their own drinking sticks • Earth.com 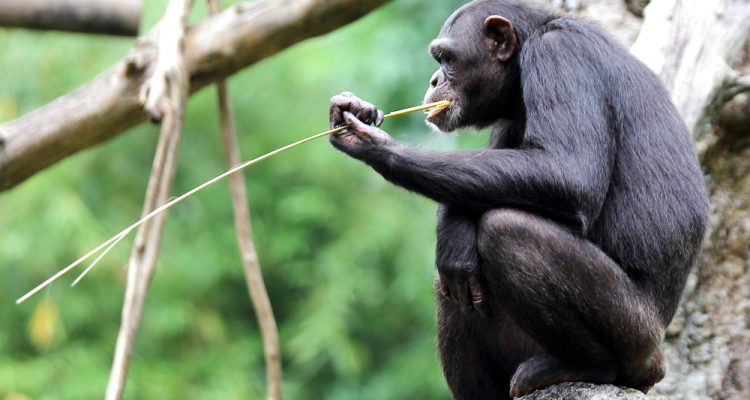 Chimpanzees found to make their own drinking sticks

A population of chimpanzees on living on the Ivory Coast have developed a fancy new technique to drink water: drinking sticks.

A team of researchers from the Comoe Chimpanzee Conservation Project used hidden cameras to record the methods that a population of chimps used to hydrate during the dry season. The footage shows the chimpanzees habitually fashioning dipping sticks by chewing one end of a stick and thus turning it into a water-absorbent tool. The researchers learned the dipping sticks were made specifically to assist with drinking.

According to lead researcher Juan Lapuente, a similar technique had previously been used by African chimpanzees by dipping sticks into bees’ nests to gather honey.

“But the use of brush-tipped sticks to dip for water is completely new and had never been described before,” Lapuente told BBC News. “These chimps use especially long brush tips that they make specially for water – much longer than those used for honey.”

Upon further examination of  the instruments, the researchers found that the extra long tips at the end of the stick provided extra absorption.

“The longer the brush, the water they collect,” said Lapuente. “This technology allows Comoe chimpanzees to obtain water from extremely narrow and deep tree holes that only they – and no other animal – can exploit, which [gives] them a superb adaptive advantage to survive in this dry and unpredictable environment.”

The team published their findings in the American Journal of Primatology.

According to the research, these chimpanzees have what is called a “drinking culture,” where this custom of using drinking sticks is shared throughout the entire group. Sadly, however, this population of chimpanzees is now critically endangered.