Chimpanzees give us clues about early human evolution • Earth.com 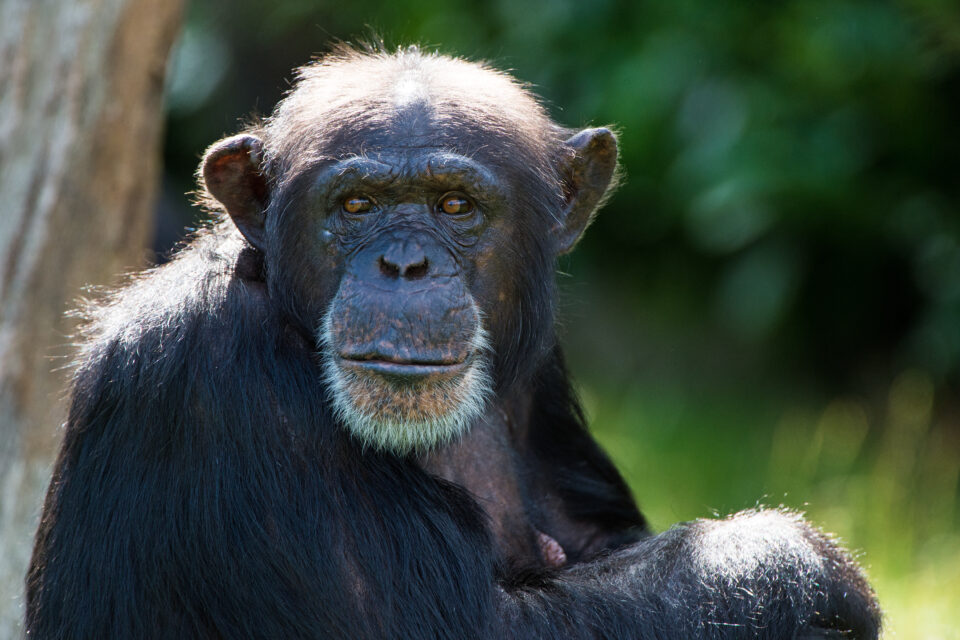 Although chimpanzees (Pan troglodytes) are most commonly associated with forested habitats in Africa, there are several countries in both West and East Africa where chimpanzee populations inhabit savannas. This implies that the habitats are more open, with higher temperatures and lower annual rainfall, which has required different adaptive strategies from the chimpanzees living there.

Savanna chimpanzees are taxonomically identical to forest-dwelling chimpanzees, and thus comparisons of the behavior, morphology and ecology of the two groups help researchers to understand how early humans may have adapted, millions of years ago, when African forests began to recede and be replaced by open savannas.

Certain behaviors and physiological responses in savanna chimpanzees, such as resting in caves or digging to access water, are considered specific adaptations to life in savanna habitats and are not observed in their forest-dwelling counterparts.

Adriana Hernández, Serra Hunter professor at the Faculty of Psychology of the University of Barcelona, co-led a recent study conducted by an international team of primatologists that reviewed the existing research on the behavior and ecology of savanna chimpanzees to understand how these apes adapt to extreme conditions.

“The study on savanna chimpanzees and what we call the landscape savanna effect have important implications for reconstructing the behavior of the first hominins who lived in similar habitats and therefore, it helps us to better understand our own evolution,” said Professor Hernández, who co-led the study with Stacy Lindshield from the University of Purdue.

“We know that early hominins adapted to savanna environments similar to those occupied by chimpanzees today, and researchers think that savanna conditions caused adaptations in our ancestors, such as brain expansion or tolerance to high temperatures.”

“Therefore, understanding how our genetically closest living relatives adapt to a dry, hot, seasonal and open environment, very similar to those where early hominins lived, helps us to model how our ancestors might have adapted and how the features that define us as humans might have emerged.”

Chimpanzees share 98.7 percent of their DNA with humans and have a common ancestor that lived between 4.5 and 6 million years ago. This makes them the closest living relatives of modern humans. However, they lack some of the physiological and cultural traits that help humans adapt to extreme heat, such as numerous sweat glands, relative lack of hair and the ability to fashion water containers in which to carry or store water.

The researchers found that savanna chimpanzees have developed specific strategies to help them cope with high temperatures.

“Understanding how they deal with heat can help us better understand what strategies human ancestors may have used to cope with high temperatures. Some strategies are probably the same for chimpanzees and hominins, such as the use of caves or going into water pools to cool down,” noted Professor Hernández. They also try to hydrate themselves during the advanced dry season by digging for water in certain places. “Early hominins also had to deal with low water availability during part of the year.”

The study also found that chimpanzee social groups in the savanna have unusually large home ranges of around 100 km², whereas chimpanzees living in more forested areas have ranges between 3 and 30 km². “However, although group sizes are similar in different habitats, chimpanzees in the savanna have a much lower population density, which could be explained by the low availability of food in this habitat.”

It is thought that there are fewer chimpanzees living in savanna habitats than in forests, although the exact numbers are not known. In general, knowledge about savanna chimpanzees is incomplete and much more research is needed.

This study also makes a contribution to understanding the potential effects of climate change on forest chimpanzees, in particular. “The adaptation of savanna chimpanzees to extreme climates can help us model how chimpanzees that currently inhabit forests might adapt to changes that climate studies project will make their environments drier and warmer,” said the researchers.

“This is important, since the species is categorized as Endangered and the West African subspecies (Pan troglodytes verus) is Critically Endangered.”

The study is published in the journal Evolutionary Anthropology.