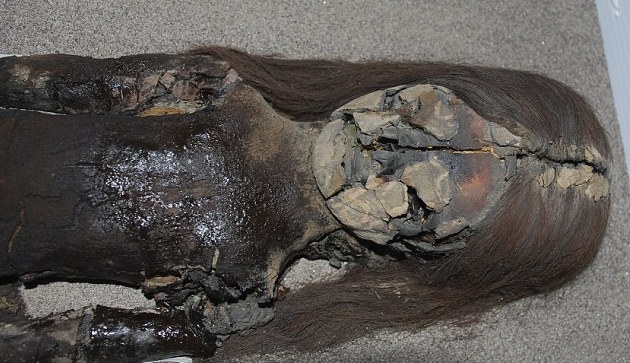 Chinchorro Chilean mummies were reduced to slime by increasing humidity.

Chile needs help in preserving some of the oldest mummies in the world. These ancient preserved corpses have become unstable in the last ten years – no researchers are seeing help in conserving these relics of our past.

The Chinchorro Chilean mummies were preserved and buried by the Chinchorro people over 7,000 years ago in the arid regions of northern Chile. Rising humidity in the region has triggered bacteria living on the preserved skin of the Chinchorro mummies to cause rotting, with some mummies transformed into nothing more than black slime.

The Chinchorro were a prehistoric people living in communities around the desert coast of Chile and Peru. Nearly 300 mummies were found in the area and are thought to date from between 5000 to 1500 BC.

“The dates that we have for the bodies are from 7,000 years ago . . . so they have more relative antiquity in terms of intentional work on the human body than that found in Egypt,” said Dr. Sergio Medina Parra, anthropologist and department head at University of Tarapacá in the northern Chilean city of Arica.

Dr. Medina is attempting to get this area to be recognized by UNESCO as a world heritage site. He said, “The application is not a goal in itself, but the start of a process, of improved conservation tools, with the Chilean state and the international community.”

Unless the Chinchorro Chilean mummies are kept in specific heat and humidity conditions, they will deteriorate. When humidity is present in the air, the preserved skin falls foul to bacteria which feeds on the skin. The 120 Chinchorro mummies at the University of Tarapacá’s museum are at risk due to rising humidity perhaps caused by climate change.

282 mummies have been excavated from the region, but scientists predict there are hundreds more beneath, estimating they are almost 4000 years older than their Egyptian counterparts.

Researchers believe that the mummification process became popular around 5,000 BC. Arica and the surrounding desert is one of the driest places in the world, with these preserved corpses often being found as sand shifts. The local climate has aided the mummies’ preservation over all these years, but as humidity rises, the future preservation of these important archaeological finds is in great danger.

Staff at the museum first noticed greasy patches on the mummies around 10 years ago and report the mummies have degraded at an accelerated rate.

Researchers at the Harvard School of Engineering and Applied Sciences jumped in to help answer what was causing this degradation. By running a series of tests, they found bacteria normally on the human skin become “supercharged” when placed on mummy skin in high humidity. Their findings revealed that the optimum humidity level to avoid further degradation was between 40 and 60 percent.

Not all the mummies were deliberately preserved; some were preserved in the desert naturally due to the extremely dry conditions.

The mummification techniques used by the Chinchorro were very sophisticated for their time.