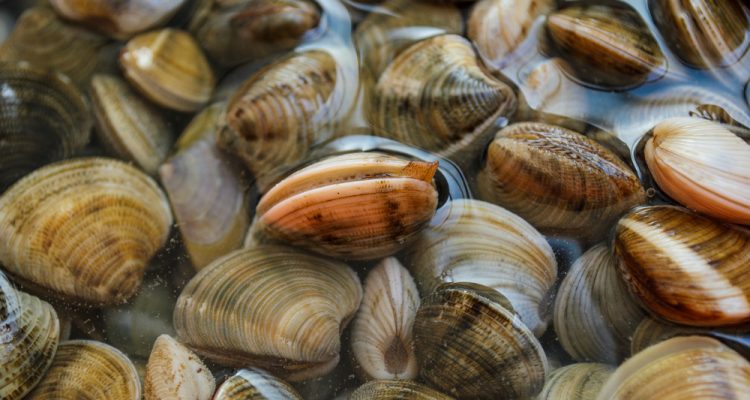 Clams don’t speak, so what can they tell scientists about the ocean? A lot, it turns out – the sea’s history is written in clam shells.

Dr. Alan Wanamaker, now a professor at Iowa State University, learned how to read that record while he was working as a postdoctoral researcher in Wales.

At Bangor University, he was put in charge of sorting through thousands of Arctica islandica clams gathered from the North Icelandic Shelf, located in the North Atlantic. The goal was to study the clam shells and use them to create a 1,000-year-long record of life in the marine climate of that area.

Wanamaker processed the clams by sectioning shells, saving portions of each one in epoxy, radiocarbon dating, determining oxygen isotopes, and more.

He also looked for clam growth rings. Like trees, clam shells grow a little each year, and how the shell grows in a certain year can tell scientists about the ocean conditions they were living in, including temperature. Since some of the clams were alive – and the species can live for up to 500 years – Wanamaker was able to work backwards and overlap specimens to build a chronological record.

When he completed his postdoctoral studies, the work was taken up by Dr. Paul Butler of Bangor University and Dr. David Reynolds, a postdoctoral research associate at Cardiff University.

Now, the three and eight others who worked on the project have published their research, with Reynolds taking the role of lead author. The work provides a record of more than 1,000 years of marine history, with a focus on the oxygen isotopes.

The work begins to fill a major gap in data about ocean climate through history, the researchers said. Because of lack of data, there has been debate in recent years over what role, if any, the North Atlantic plays in climate change, they said.

Their research indicates that the North Atlantic has played a role in previous transitions in surface temperatures in the Northern Hemisphere, the researchers said.

One interesting item from the data, Wanamaker said, was that for most of the chronology, ocean temperature changes preceded atmospheric changes. However, after the Industrial Revolution began in the 1800s, that flipped, he said; for the past 200 years, atmospheric temperatures have led any oceanic warming or cooling.

Even without that important data, however, the study would make history for ocean science. It’s the first time that scientists have been able to piece together a year-by-year chronology of ocean conditions for such a long period of time, Wanamaker said.

Their study was published online by the journal Nature Communications. Funding was provided by the United Kingdom’s Natural Environment Research Council and the European Union.