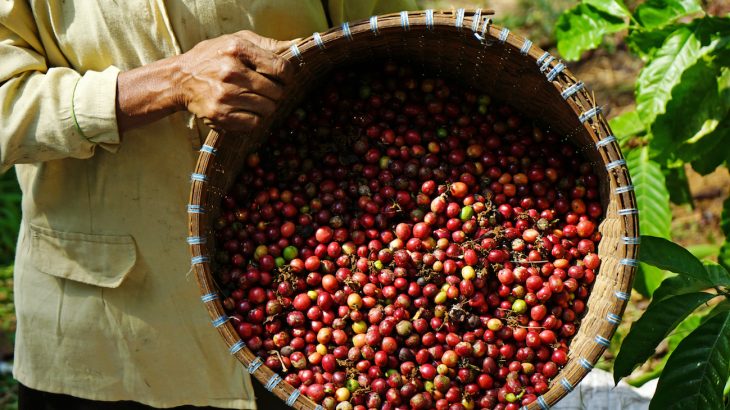 Coffee is often associated with exotic places.  Names of roasts, varieties and locations listed on the bags of coffee beans all bring to mind tropical paradises or quaint villages where coffee is roasted in tiny batches.

Shade grown coffee produced by fairly paid workers can indeed contribute to a paradise on Earth.  Lemurs live high in trees above coffee plantations in some regions of Madagascar. Smithsonian Magazine reported that shade grown coffee can also support bird and other wildlife diversity.  Certifications like Fairtrade also aim to guarantee that coffee plantation workers are paid and treated justly.

With the mere presence of labels like Fairtrade and Rainforest Alliance certifications, it makes you wonder, what is the alternative to just and environmentally friendly coffee growing?

According to Rainforest Alliance, 80% of rainforest loss comes from agriculture, which sometimes includes coffee growing.  The organization says that sustainable farming is key to stopping not just deforestation but cycles of poverty and climate change.

What do farms look like that fall short of the lofty goals of organizations like Fairtrade and Rainforest Alliance?  What are the worst coffee farms like?

The answer first came last year when Mongabay reported on coffee growers on a plantations certified by Starbucks were found to be working in almost slave-like conditions. In August 2018, Brazil Labor Ministry investigators raided the Córrego das Almas farm in Brazil and rescued 18 workers working on coffee plantations in near slavery.

One of the workers rescued reported that there were lots of bats and mice present in the living quarters of the farm, to the point that the small mammals would eat all of the worker’s food before they could.  No records of hours were kept for 11 hour days worked 6 days a week. The workers collective housing had dangerously poor sanitation and no running water.

Instead water for cooking, cleaning and drinking was taken from open containers with no lids where dead animals were sometimes found.  Perhaps worst of all, payments for the amount of coffee picked were rigged. Sometimes coffee was left to be weighed in the morning only to disappear at night without explanation.

The farm was certified by C.A.F.E. Practices, a certification owned by Starbucks in partnership with SCS Global Services.  After the raid, the companies reviewed the certification of the farm to look at issues of compliance with their standards. Another certification, the UTZ seal, from a Netherlands based organization was pulled when the organization was questioned about the incident by a reporter.

According to Mongabay, in July 2018 another farm in Brazil Cedro II was found with farm workers in slave-like conditions working 17 hour shifts, often without a day off.  This farm as well had certifications from Starbucks and Nestle that were suspended when the farm made a government ‘Dirty List’. As of April 2019, Brazil’s ‘Dirty List’ contains 48 companies that engaged in something akin to slavery.  Cedro II also had a Rainforest Alliance certification that was suspended.

Now just this year, eight months after making Brazil’s Dirty List, Starbucks and Nescafé said they would stop buying coffee from the Cedro II farm.  This raises questions of how far can we trust certifications to begin with?

Counter Culture points out that different certifications mean different things, with each focusing on different aspects of the environment and farm employee wellbeing but no one certification covering all bases.  Besides that, certification labels cost money and there is a larger supply of certified coffee than there is demand for it.

Simply, not enough consumers care whether coffee has a certification or not to create a surefire benefit to getting certified for growers.  The benefit to becoming certified is a bit speculative. On top of that, as we’ve seen, sometimes coffee growers can get around meeting the actual requirements of the certification, instead growing coffee under immoral and even illegal conditions.  Coffee is after all big business, which leaves it open to corruption and makes the supply chain complex and hard to follow.

In 2011, The Guardian reported that coffee is the second most tradable commodity after oil.  There‘ s also an imbalance in power with a majority of small growers supplying coffee to large companies like Starbucks, which increases competition between individual growers.  It’s not just people that pay the cost either.

National Geographic reported this year that Americans drink about 400 million cups of coffee a day, without realizing the scope and impact of that consumption on the tropics.  Bird diversity suffers with the increase of coffee plantations in places like Costa Rica. Along with a loss in bird diversity, is a loss of environmental integrity as a whole.

The good news is that beyond certifications, there are things that consumers can look at. Coffee from some sources is naturally more sustainable than others.  Coffee was first grown in Ethiopia, no one knows exactly when it was discovered. The National Coffee Association says a legend tells of a goat herder named Kaldi discovered coffee after noticing his goats wouldn’t sleep at night after eating berries from a certain bush.  From Ethiopia coffee spread to the Arabian Peninsula and then to the world, the rest is history.

The point is that coffee is a natural part of the East African environment, where in Kenya and Ethiopia it is still grown under the shade of tall trees, according to National Geographic.  Mexican coffee is also said to have a high percentage of shade grown coffee.  Unfortunately, this still does little for those trapped in unending servitude that is slavery in everything but name.

Even coffee with multiple certifications has no guarantee to exclude all forms of exploitation as with the farms raided by Brazil’s government.  The only sure way to know you as a consumer aren’t contributing to misery or destruction is to visit a farm itself or forego a cup of that magical black elixir that is so much a part of many people’s mornings.