Crusaders paired up with near Easterners but left no lasting genetic legacy • Earth.com 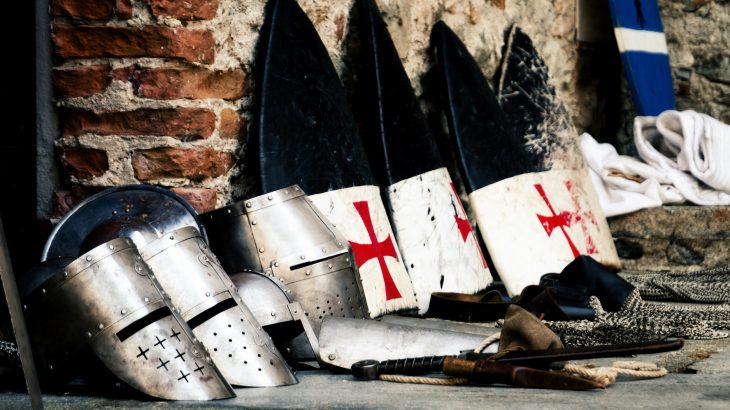 The first genetic study of ancient Crusaders shows that European soldiers in the Crusades were fierce warriors that also mixed with locals and raised families.

However, even though Crusade soldiers had children and families, they left no significant genetic legacy, and their influence over the region was short lived.

Researchers from the Wellcome Sanger Institute analyzed DNA extracted from nine skeletons believed to belong to Crusaders dating back to the 13th century that were recently unearthed by archeologists.

The study was published in the American Journal of Human Genetics.

“The Crusaders travelled to the near East and had relationships with the local people, with their sons later joining to fight their cause,” said Marc Haber, the lead author of the study. “However, after the fighting had finished, the mixed generation married into the local population and the genetic traces of the Crusaders were quickly lost.”

During the Crusades, which were fought between 1095 and 1291, hundreds of thousands of Christian Europeans invaded the near East in an attempt to claim the region.

Written documents of nobility that were recruited to the Crusades provide some record of who was involved in the wars, but no written documents exist for the soldiers who lived and died in the near East at the time.

The remains were found in a burial pit in Sidon, Lebanon where the bodies had been burned and buried, and markings on the bones showed signs of significant blunt force injuries which indicate a violent death.

In the pit with the bones, researchers discovered a coin and European shoe buckles which led archeologists to think that the pit was a burial site for Crusade soldiers.

Carbon dating and DNA analysis helped confirm this theory, and researchers from the Wellcome Sanger Institute tackled the incredibly challenging task of extracting DNA from the ancient bones.

The researchers worked with archeologists to transfer nine skeletons from Lebanon to Cambridge where small amounts of surviving DNA 800 years old were meticulously extracted in an ultra-sterile lab. Such DNA extraction was only made possible in recent years thanks to advancements in DNA sequencing technology.

After sequencing the DNA, the researchers found that three of the skeletons belonged to Europeans of diverse origins and four were near Easterners who had fought side by side with the European soldiers.

Two of the individuals had mixed European and near East genetic ancestry.

“Historical documents tell us the names of the nobility who led the Crusades, but the identities of the soldiers remained a mystery,” said Chris Tyler-Smith, a co-author of the study. “Genomics gives an unprecedented view of the past and shows the Crusaders originated from western Europe and recruited local people of the near East to join them in battle. The Crusaders and near Easterners lived, fought and died side by side.”

Despite the fact that descendants of crusaders and locals fought in the Crusades, DNA sequencing of local Lebanese people who lived 2,000 years ago shows that the Crusaders didn’t leave much of a lasting genetic legacy, a fact further emphasized by the sparse traces of European DNA in Lebanese population’s today.