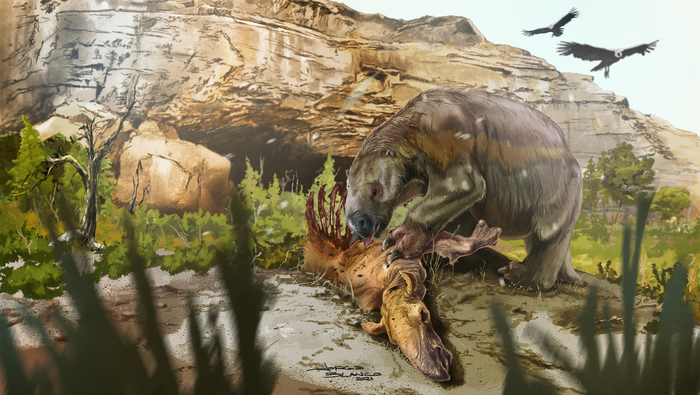 A new study led by the American Museum of Natural History has found that Darwin’s ground sloth (Mylodon darwinii), which lived in South America until 10,000 or 12,000 years ago, was not strictly herbivorous – as all its living relatives are.

Through a chemical analysis of amino acids preserved in sloth hair, the scientists found evidence that this ancient species of sloth was omnivorous, occasionally eating meat and other protein in addition to plants.

Although the six living sloth species are all small vegetarian tree-dwellers living only in the tropical forests of Central and South America, fossil evidence shows that giant sloths (some even as large as an elephant) roamed the ancient landscapes of today’s North, Central, and South America. Scientists estimate that Darwin’s ground sloth was almost ten feet long and weighted between 2,200 and 4,400 pounds.

Based on its dental and jaw structures, preserved excrement from fossil species, and the fact that all living sloths are herbivorous, researchers initially believed that this sloth was also fully vegetarian. However, by using an innovative approach known as “amino acid compound-specific isotope analysis” to test samples from seven living and extinct species of sloths and anteaters, as well as from a variety of other omnivores, the scientists found that Darwin’s ground sloth was not exclusively herbivorous.

“Whether they were sporadic scavengers or opportunistic consumers of animal protein can’t be determined from our research, but we now have strong evidence contradicting the long-standing presumption that all sloths were obligate herbivores,” explained lead author Julia Tejada, a research associate at the American Museum of Natural History and postdoctoral researcher at the University of Montpellier, France.

According to prior research, there were too many herbivores than could be supported by ancient South America’s existing plant ecosystem, suggesting that at least some of these animals must have consumed different types of food too. This new study provides evidence that this hypothesis was true.

“These results, providing the first direct evidence of omnivory in an ancient sloth species, demands reevaluation of the entire ecological structure of ancient mammalian communities in South America, as sloths represented a major component of these ecosystems across the past 34 million years,” Tejada concluded.