Did early hominins use stone tools like chimpanzees do today? • Earth.com 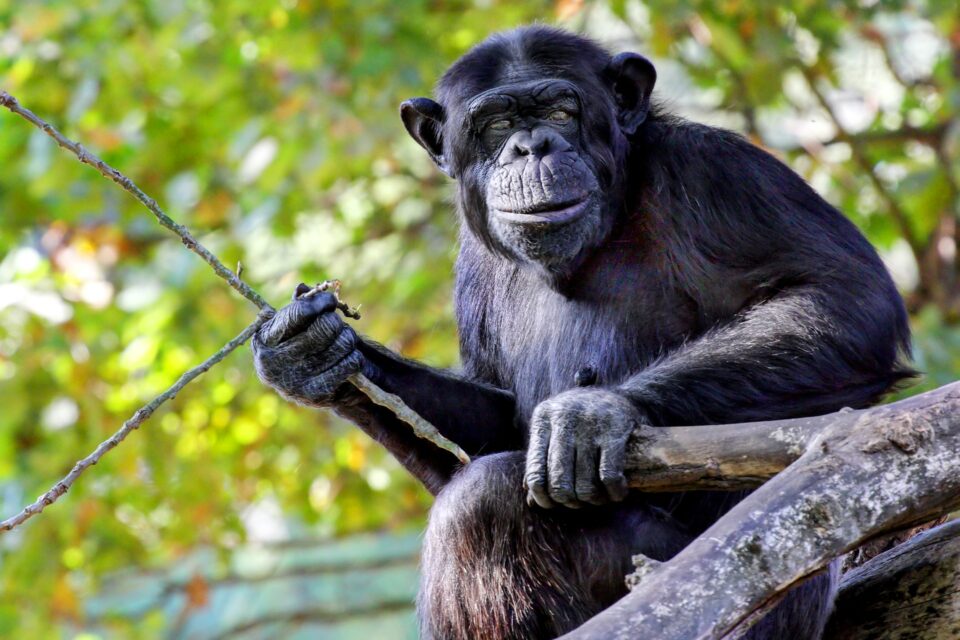 Did early hominins use stone tools like chimpanzees do today?

Our earliest hominin ancestors used a variety of tools to interact with, and modify their environment. Such tools would have given them access to more sources of food and improved their chances of survival. Studies of early hominin tool use have been focused mostly on the production and diversity of stone flakes as cutting tools, rather than on the use of pounding tools. This is despite the fact that percussive artefacts have been identified at several Plio-Pleistocene archaeological sites and even form a component of the archaeological assemblages into the Later Stone Age.

In a new study led by Tomos Proffitt from the Max Planck Institute of Evolutionary Anthropology, the use of stone tools for pounding has been investigated in a group of wild chimpanzees from the Taï Forest National Park in Cote d’Ivoire. These primates have long been known to use percussive stone tools to crack open edible nuts; the tools take the form of hammer stones with which to bash a nut, and anvils upon which the nut is initially placed. The researchers felt that an improved understanding of the characteristics of these types of tools may cast light on the tool artefacts found at early hominin archaeological sites.

For their study, the researchers analyzed a total of 11 hammerstones and seven stone anvils, each one selected because it showed signs of being actively used.  All hammerstones were found in close association with an active anvil (either wooden or stone) and freshly cracked nut debris. All anvils were found in association with an active hammerstone and freshly cracked nut debris within a radius of 50 cm to the anvil. By using a techno-typological analysis, along with two- and three-dimensional quantifiable measures of percussive damage patterns, the researchers characterized the features of these stone tools.

The experts then compared the findings with those derived from a similar study of stone percussive tools in another group of wild chimpanzees, this time in the forest of Bossou in Guinea. In this way, the researchers hoped to develop a better understanding of the variation within and between assemblages of chimpanzee stone tools used for nut-cracking.

The researchers found that the chimpanzees of the Taï Forest regularly use stone and wooden tools to crack open nuts from five different species. These include coula nuts (Coula edulis), panda (Panda oleosa), parinari (Parinari excelsa) saccaglottis (Sacoglottis gabonensis) and, more rarely, detarium nuts (Detarium senegalense). The chimpanzees use only hammers made of stone, but were found to use both stone anvils (for example exposed boulders) and wooden anvils, usually in the form of living tree roots that were often part of the nut tree itself.

All of the hammerstones and stone anvils showed evidence of use wear, mostly in the form of pitting and depressions on the surface. There were also places where the surface grain had been crushed, flakes had been accidentally detached and nut residue was present. The hammerstones and anvils were made of different types of rock, reflecting what was present in the local environment, and the hammers were of different sizes, reflecting the fact that some of the nuts are easier to crack open than others.

When the hammerstones and anvils used by the Taï Forest chimpanzees were compared with those used by chimpanzees from the Bossou Forest in Guinea, there were several noticeable differences. The Taï Forest tools were larger in size overall and showed different patterns of wear. The researchers feel that, although this represents a clear pattern of difference between chimpanzee groups, this may be driven by a combination of stone choice, stone availability, and the nut species eaten.

As a result of their use of stone tools, chimpanzees have doubtless left a durable archaeological record of their own. Previous research has shown that, for some groups of chimpanzees this record may date back at least 4,300 years. This means that the assemblages may represent a useful comparative model for early hominin tool use, specifically when it involves tools for pounding.

“The ability to identify regional differences in stone tool material culture in primates opens up a range of possibilities for future primate archaeological studies,” said Proffitt.

It has been hypothesized that a simple technology, like nut cracking, was a precursor to more complex stone technologies during the early stages of our own evolution more than three million years ago. “By understanding what this simple stone tool technology looks like, and how it varies between groups, we can start to understand how to better identify this signature in the earliest hominin archaeological record,” said Proffitt.