The remarkable dog who broke a climbing record in the Himalayas • Earth.com 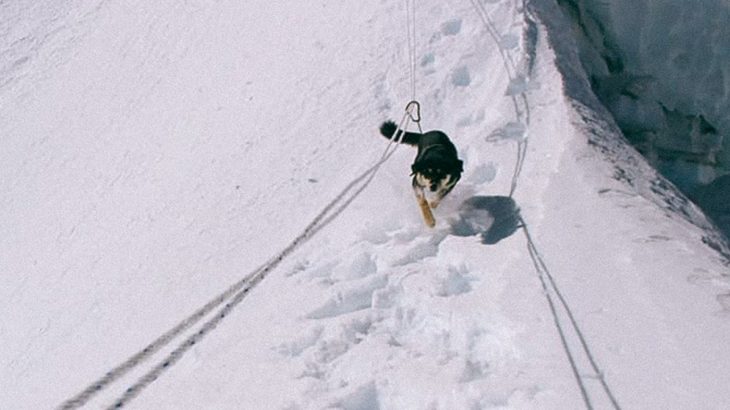 The remarkable dog who broke a climbing record in the Himalayas

One especially skilled dog recently broke the elevation record for canine mountaineers.  Dogs are actually quite commonly encountered on mountaineering trips in the Himalayas. In his book, Merle’s Door, author Ted Kerasote recounted a climb where he carried a stray dog he named ‘the Khyi’ who was determined to follow him:

“I took off my pack and opened it wide.  Since the ropes and ice-climbing equipment were being employed on the mountain, I now had extra room.  Lifting the Khyi by his armpits, I slipped him into the pack tail-first. He didn’t protest in the least, and I continued up the ropes…Occasionally the load pulled me off my stance, my crampons scraping across the ice as I swung on the rope.  The Khyi didn’t stir. When I looked around, he met my eye and gave me a steady look, unfazed by the steep angle.”

On Mt. Hood, an 11,249 ft volcanic peak in Oregon’s Cascade mountains, a dog was attributed with saving the lives of mountaineers.  CBS News reports that climbers cuddled up next to a black lab named Velvet when trapped on the mountain in a snowstorm.  Rescuers attributed the safety of the climbers partially to the dog’s body heat. The climbers were also able to be found by using emergency location beacons the Sheriff’s department used to locate them on the mountain and bring them down safely.

Hiking mountains in Colorado and parts of Wyoming, it’s common to see dogs along for the trip.  Plenty of cattle dogs, labs and other mid to large sized dogs climb some of Colorado’s highest peaks each year under their own power.  I’ve also seen some chihuahuas and other small dogs partially carried to the top. Our Shih Tzu Zari has taken a ride in my pack up several Colorado peaks.  Mountains are still mountains though, and some people underestimate the hardship dogs face while climbing.

Sometimes, dogs run into trouble and need rescuing themselves.  Outside Online reported in 2012 on a German Shepherd left alone at 13,000 feet elevation on the 14,264 ft Mt. Bierstadt.  The dog was left alone in cold weather with no food, no shelter and little water for seven days. The climb down from the mountain turned out to be more than the dog’s owner could handle while also taking care of his dog.  Assuming the dog died of exposure that first night, the man gave up. Fortunately for the dog, other brave volunteers climbed the mountain and took turns carrying her in a backpack on the climb down. It’s stories like this that make many mountaineers discourage dogs from tagging along on climbing trips.

In fact, the Seattle Times reports that mountaineers strongly discourage people from bringing dogs on any serious climbs like the one Velvet attempted on Mt. Hood.  Every climb and every dog is different though, and there is a distinction to be made between mountaineering and hiking a mountain.

Recently, stray dog found in the Himalayas named Mera showed that it’s not always up to humans to set a dog’s climbing goals.  Mountaineers were climbing Baruntse when Mera started following them. Generally, mountaineers under such demanding and dangerous conditions discourage dogs from following them, for the safety of everyone involved.  But Mera showed herself determined and continued to persevere.

Baruntse is by the standards of Nepal not incredibly impressive at only 23,389 ft elevation above sea level compared with the highest elevation of Mt. Everest at 29,029 ft.  By world standards though, Baruntse is very high. The highest peak in North America, Mt. Denali, is shorter at 20,310 ft elevation. Despite the obstacles of elevation, cold weather and rough terrain, Mera was determined to climb the mountain.

Outside Online reported earlier this year on the mountaineering expedition that Mera tagged along on.  The trip was led by Washington mountaineer Don Wargowsky, who was one of the first to take a liking to Mera.  The team was about a third of their way into a month long expedition on Mera Peak when the dog Mera came running to them, earning her name.  Wargowsky supplied Mera with pieces of meat and a sleeping pad and jacket to use as a nest inside his tent.

After Mera Peak, the team started up Baruntse where Mera truly showed her mettle.  After following Sherpas to where they were setting up fixed ropes, Mera seemed spooked by the steep terrain and refused to follow them back to base camp.  Mera spent two nights at high elevation by herself before again being reunited with the climbers. The Sherpas took her back down with them after setting up routes to higher climbing camps.  Mera’s paws were bloody and injured but she seemed undeterred. 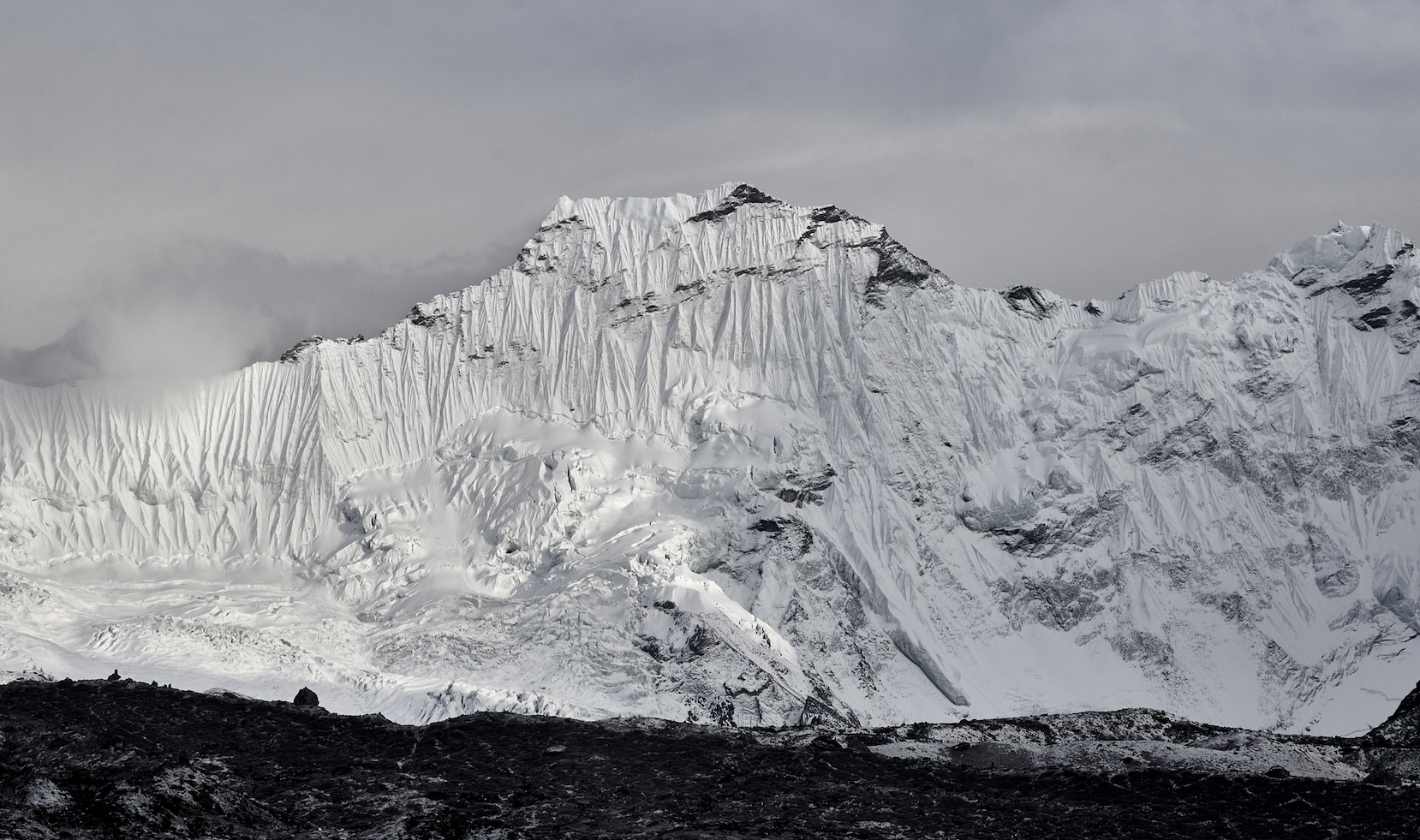 Sherpas in Nepal live in an area with widespread rabies among street dogs and the animals are not always treated well.  Initially, the Sherpas seemed to only tolerate Mera but her prowess impressed everyone and it became clear that she is a very special dog.  Mera showed that not only was she tough but also determined.

During a particularly rough part of the climb, Wargowsky tied Mera up at camp to keep her safe.  Mera just chewed through the rope and ran to catch up. Another time, Mera slipped on what could have lead to a 600 foot fall but was caught by Wargowsky.  On the day the mountaineering team was set to climb to the summit, Mera was left at 2am sleeping in the tent.

Hours later, Mera sprinted up to the human climbers catching them after giving them a serious head start.  In the end, Mera climbed to the top of Baruntse under her own power, a challenging feet for many humans. This is, as far as anyone can tell, an elevation record for dogs.  On the descent, a harness was made for Mera and she was clipped with a carabiner into a rope to keep her safe.

At the end of the trip, the base camp manager, a Sherpa, adopted Mera.  Because the team was flying back to Kathmandu and dogs can’t fly on such trips, someone was paid $100 to walk three days to take Mera another three days to the nearest bus ride to her new home in Kathmandu.  Mera’s name was changed to Baru in honor of her achievement. Now, Baru has healed from her mountaineering wounds and put on weight she lost, perhaps preparing for a new adventure.