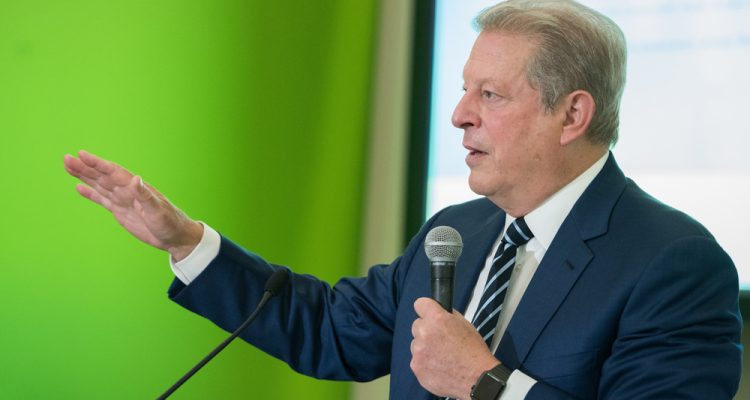 President-elect Donald Trump has long been suspicious of climate change. In 2012, he famously called it a Chinese hoax on his Twitter account, and in 2014, he pointed to the abnormally cold winter as evidence of that.

But in the weeks following Election Day, he has softened his stance, telling The New York Times that he does, in fact, see “connectivity” between human activity and rising global temperatures.

On Monday, his daughter Ivanka Trump – who is expected to play a role in his policy planning and has declared climate change one of her top issues – met with former Vice President Al Gore, a vocal climate change activist. To the surprise of many, including his own staff, Donald Trump sat in.

Earlier Monday, Trump spokesman Jason Miller told reporters that the president-elect would not be involved in the meeting. However, Gore told reporters that he had a “lengthy and very productive” chat with the soon-to-be leader of the U.S. after meeting with Ivanka Trump.

In fact, Gore said, he spent more time with Donald Trump than Ivanka, and he plans to continue the conversation in the future.

It’s a change of stance for Gore, who before the election said that a Trump presidency would be “devastating” for the planet and the environment.

Gore is a long-time climate change advocate. Ten years ago, he released his documentary about global warming, “An Inconvenient Truth.” In 2007, he shared a Nobel Peace Prize with the Intergovernmental Panel on Climate Change for their work on the subject.

Gore didn’t offer any clues to the substance of his meeting with the Trumps, and climate change advocates said it’s unclear whether or how much President-elect Trump has changed his stance on the issue since Election Day.

Several of Trump’s Cabinet picks are global warming skeptics who have expressed doubt about whether humans could affect the Earth’s climate, and sometimes whether the climate is radically changing at all.

And while Ivanka Trump has made it one of her issues, it’s unclear how much of a role she will be able to play in the Trump administration. The president-elect has said he will pass control of his businesses on to his children for the next four years to avoid conflicts of interest, which would likely limit Ivanka Trump’s involvement in her father’s presidency.