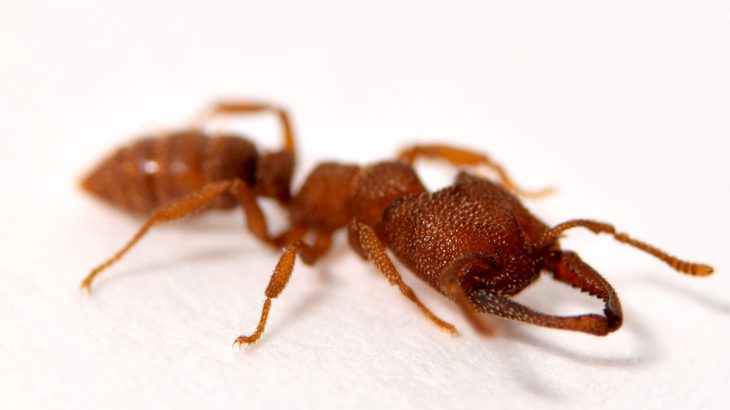 Dracula ant’s snapping jaw movement is the fastest on record

Can you imagine a movement faster than the blink of an eye or the snap of your finger? Now imagine you’re the unlucky prey on the receiving end of a bite so powerful and fast that it’s now considered the fastest animal movement on record.

Researchers from the University of Illinois discovered that the Dracula ant, Mystrium camillae, has the fastest bite on record and can snap its mandibles at speeds up to 200 miles per hour.

“These ants are fascinating as their mandibles are very unusual,” said Andrew Suarez, a leader of the research. “Even among ants that power-amplify their jaws, the Dracula ants are unique: Instead of using three different parts for the spring, latch and lever arm, all three are combined in the mandible.”

The goal of the study, published in the journal Royal Society Open Science, was to examine the snap jaw movements and jaw shape of the Dracula ant, which is native to Australia and the Southeast Asian Tropics.

Previously, trap-jaw ants were considered to possess some of the fastest moving mandibles in the ant kingdom.

Trap-jaw ants are known for snapping their jaws closed from an open position, but Dracula ants use spring-loaded, sliding movements to achieve their powerful snap.

The researchers filmed the ants while they snapped their mandibles at 480,00 frames per second which allowed the researchers to analyze the movements.

“Scientists have described many different spring-loading mechanisms in ants, but no one knew the relative speed of each of these mechanisms,” said Fredrick J. Larabee, who also helped lead the study. “We had to use incredibly fast cameras to see the whole movement. We also used X-ray imaging technology to be able to see their anatomy in three dimensions, to better understand how the movement works.”

The researchers noticed that the Dracula ants “power up” their mandibles as they press the tips together. The snap occurs when one mandible slides across the other as it’s released.

“The ants use this motion to smack other arthropods, likely stunning them, smashing them against a tunnel wall or pushing them away,” said Suarez. “The prey is then transported back to the nest, where it is fed to the ants’ larvae.”

The researchers used computer simulations of the Dracula ant’s jaw snaps to see if different roles or castes in the nest impacts jaw strength or snap abilities.

“Our main findings are that snap-jaws are the fastest of the spring-loaded ant mouthparts, and the fastest currently known animal movement,” said Larabee. “By comparing the jaw shape of snapping ants with biting ants, we also learned that it only took small changes in shape for the jaws to evolve a new function: acting as a spring.”