Florida “skull-collecting” ants dismember the bodies of their prey • Earth.com 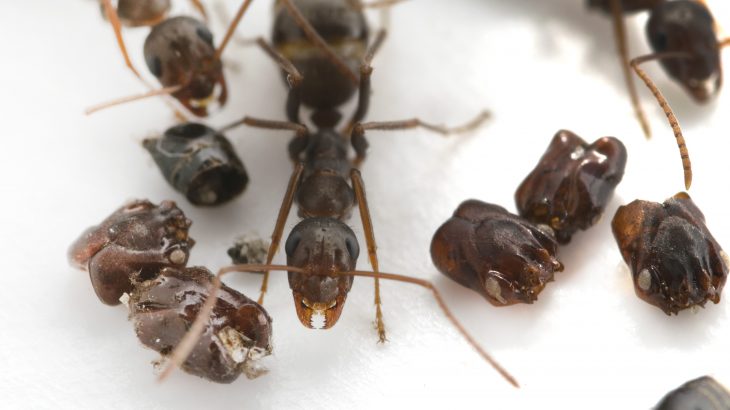 Florida “skull-collecting” ants dismember the bodies of their prey

New research has revealed the behavioral strategies of a Florida ant that decorates its nest with the dismembered body parts of other ants. Study author Adrian Smith is a scientist at the North Carolina Museum of Natural Sciences and North Carolina State University.

“Add ‘skull-collecting ant’ to the list of strange creatures in Florida,” said Smith. “In 1958, shortly after this ant was described as a species, scientists reported something weird about it.”

It was previously discovered that nests belonging to Formica archboldi were home to the decapitated heads of fierce insect predators called trap-jaw ants, which are not easy prey for other ants. This led researchers to believe that F. archbold either inherits old trap-jaw ant nesting sites or is a specialized predator.

“This was a study that grew out of reading a peculiar observation in a 60-year-old research paper,” said Smith. “Odds were that these ant heads weren’t in Formica nests by chance and that there was some interesting biology behind this natural history note.”

In laboratory colonies, time-lapse video observation of the interior nest chambers showed that after the trap-jaw ants are killed they are dragged into the nest and dismembered.

“The scientifically surprising finding of this study was that these ants chemically match or mimic the chemical profiles of two species of trap-jaw ant,” said Smith.

“It’s really unusual for an ant species to display this much variation in chemical signature. Also, chemical mimicry is usually a tactic used by social parasites, but there’s no evidence that F. archboldi are a parasitic species.”

“In aiming to figure out one unusual aspect of this ant’s biology, this research has turned up another in the chemical data.”

According to Smith, the chemical mimicry most likely represents a long evolutionary history between the two ant species.

“Now Formica archboldiis the most chemically diverse ant species we know of. Before this work, it was just a species with a weird head-collecting habit. Now we have what might be a model species for understanding the evolution of chemical diversification and mimicry.”

The study is published in the journal Insectes Sociaux.