Drones spy on ‘uncontacted’ tribes in the Amazon • Earth.com 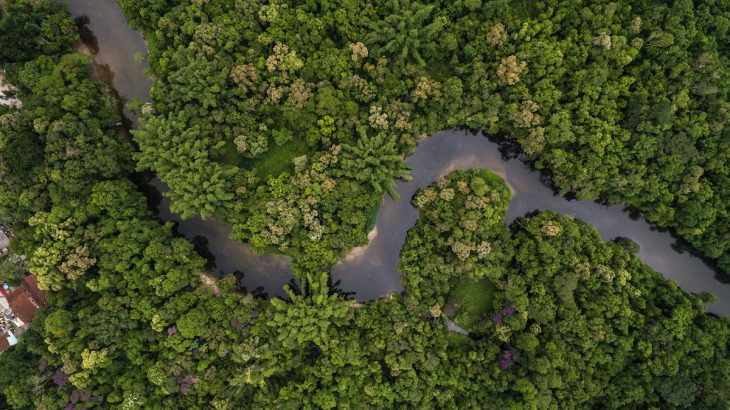 Drones spy on ‘uncontacted’ tribes in the Amazon

Last summer, FUNAI, a government agency in Brazil responsible for the protection of indigenous people released a video.  The video is simply a half a minute footage of a man chopping down a tree in the Amazon rainforest.  FUNAI also released still photos taken in the Amazon; pictures of a stone ax, dugout canoes and thatched huts.  What makes the video and photos interesting and controversial is context. The footage was released with another video of aerial footage showing people walking across a clearing, holding poles or spears.  Both videos are footage of ‘uncontacted’ tribes in the Amazon rainforest and both videos were shot by drones without knowledge or consent from those featured in the footage. Most likely, the people in the film have no knowledge of either drones or videos at all.

The Amazon rainforest has a dark history of exploitation and violence, especially when it comes to its indigenous population.  For decades rubber was only tapped from trees found in the wild and it was an incredibly profitable endeavor.  Rubber trees couldn’t simply be planted close together in plantations in the Americas because of the prevalence of diseases that could wipe out entire plantations.  In the wild, trees were spaced apart sufficiently that disease was a relatively minor threat.

Because rubber tapping had to be carried out in the wild, the work was extremely labor intensive.  Business owners, wanting to maximize their profits sought to minimize their own expenses and this often meant slave labor.  Native Americans in South America were forced into labor in horrendous conditions. Sometimes a rubber baron would kidnap a man’s children or wife and hold them captive, forcing the man to work.  Occasionally men came willingly to work tapping rubber but were lent things like boots, gloves and machetes, then continuously kept in debt to rubber barons. The more a man worked under this indentured servitude the more he fed the cycle of his own debt, never escaping the burden.  The violence towards the enslaved natives is hard to comprehend, one man burnt down a house with natives inside simply to shoot the people fleeing from within for target practice.

Many of the tribespeople on the rubber frontier fled deeper into the Amazon rainforest to escape slavery, rape and murder from colonists.  Some of these tribespeople became ‘uncontacted’ tribes, living for generations without contacting the outside world. Other uncontacted tribes people may have never been in direct contact with European colonists or outsiders but undoubtedly they’ve heard rumors from other indigenous groups in the Amazon region.

Brazil pioneered the protection of indigenous people in South America.  Initially it created FUNAI, or the National Indian Foundation to promote peaceful integration of native peoples with mainstream society.  Initially the agency worked as a buffer between indigenous people living in the Amazon or other remote areas of Brazil and loggers, ranchers, or other pioneers.  Over time the agency evolved and eventually refuges were created for indigenous people to live and practice their traditional way of life. In a similar vein, neighboring Peru has created unique national parks were indigenous people continue to live on their traditional lands.  Brazil further innovated by creating the first lands set aside for uncontacted tribes, granting them the opportunity to decide whether they would contact the outside world or live in isolation, with no push from the government and no one else allowed to interfere or visit them.

In Brazil, all Indigenous people are given the inalienable right to the land they traditionally occupied.  In practice this can lead to legal battles over land of uncontacted tribes and between mainstream native peoples and others.  According to Wikipedia, today there are 672 indigenous territories which make up 13% of Brazil despite indigenous people making only .41% of Brazil’s overall population.  Some are critical of Brazil’s system, seeing land set aside for indigenous people as a drain on the economic development of the country. The footage from the drone shows how much untouched land is used by only a few people but it also shows how Brazil through restraint has been able to save something now rare and irreplaceable.

The drone footage now released by FUNAI is a glimpse into the lives of uncontacted tribes.  The footage was part of surveillance to ascertain whether native people were involved with altercations between pioneers in the remote Amazon.  The especially controversial part of the footage isn’t so much that the footage was shot but that it was released to the public. Monitoring the safety of a group of people while also maintaining a policy of not contacting them is undoubtedly a hard job so it’s easy to understand why FUNAI would film ‘uncontacted’ tribes.  It’s a little harder to understand why FUNAI would release footage of these people to the public, violating privacy they exist partially to ensure.

The film of the man chopping at a tree with an axe is especially tragic.  The man is said to have lived alone in the Amazon for years, the sole survivor of genocide.  The man is the last of a group of people largely unknown to the outside. There is no way of knowing the man’s language or the majority of information about his culture or religion.

According to an article published in The New York Times, FUNAI knows of eight contacted indigenous peoples in the area and 11 uncontacted.  FUNAI travelled more than 180 miles by foot, boat and motor vehicle to the region where the photos were taken.  Two groups of illegal hunters and farmers were arrested in the area which is to be solely occupied by indigenous groups.

Unrepresented Nations & Peoples Organization (UNPO) reported last year that FUNAI had serious budget cuts from Brazil’s federal government and had to shut several of their offices.  UNPO said that the system of reserves managed by FUNAI was barely functioning and then about a year later, FUNAI released the footage of uncontacted tribes.

The footage released during one of FUNAI’s biggest budget cuts could almost be interpreted as a cry for help as much as a thoughtless breach of basic privacy.  FUNAI is in a tough position, being a government agency that must protect people that have no direct contact with the government of Brazil from people who elect that government.  For many uncontacted tribes are a relic of the past, people that must be drug into the 21st century for their (or our) own good. People hungry for land, timber, minerals and game to hunt all seem to want the border opened up.

With government funding being cut from FUNAI and much of the public being against the agency, they again navigate the dangerous place between people and land easily exploited and the greed of the masses.  Footage like this could be a step towards a change in policy towards contacting tribes but it also shows the world what could be lost if organizations like FUNAI continue to be underfunded.