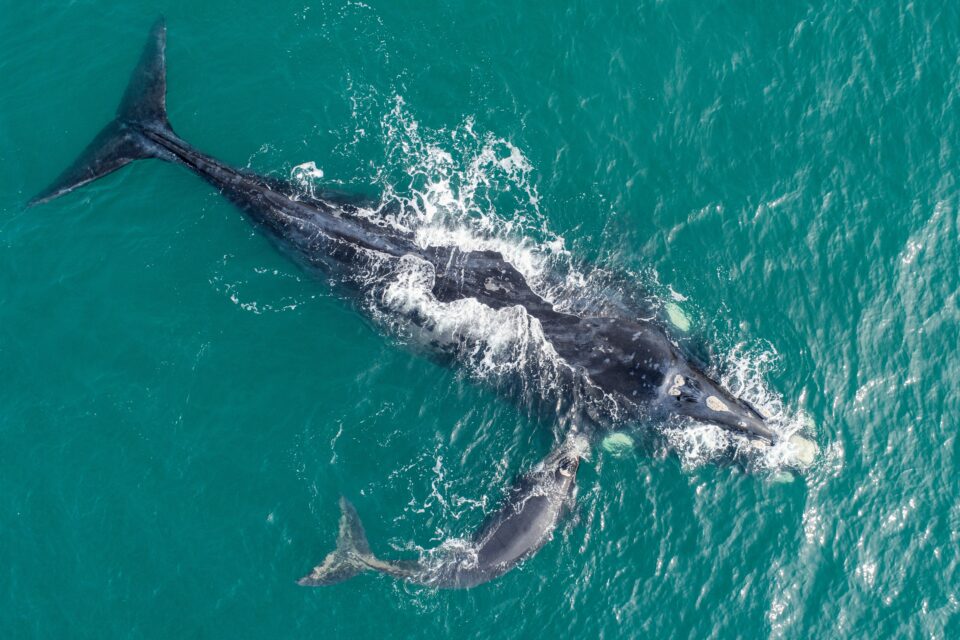 Previous research has shown that North Atlantic right whales are declining in size. The whales may be smaller in size due to tangling with fishing gear and other stresses. Now, new research shows this shrinking could have dire consequences for the endangered whales.

“Smaller females appear to have less capacity to raise calves as frequently as larger whales,” said Joshua Stewart, a research biologist with NOAA Fisheries’ Southwest Fisheries Science Center. “Their smaller size means they may take longer to recover from the energetic cost of giving birth, especially in light of other stresses on the population.”

Stewart collaborated with other researchers from Oregon State University, Woods Hole Oceanographic Institution, the New England Aquarium, and SR3 on the findings. The scientists were able to examine the whales using high quality aerial photography.

“We were able to measure whales by flying a camera high above them, essentially giving them a health check without them knowing we were there,” said study co-author John Durban.

The research showed that larger females were able to give birth to larger and healthier offspring. Over the course of years, larger whales also produced more young. The birth rate of the 350 remaining right whales is currently at a 40 year low. This is partially due to entanglement in fishing gear the research suggests.

“After decades of research on this species, we have learned about the stressors right whales face and, with this study, have gained further insights into how these stressors are affecting their reproduction,” said study co-author Amy Knowlton.

“The remedies to address these threats are clear: shifting how humans operate in the ocean so that do not inadvertently harm whales. That means adapting to weaker ropes used for fishing and ultimately ropeless fishing gear as well as broader areas of vessel speed restrictions in the right whale’s range. With these changes, we could reverse the decline we are witnessing in this species.”

Other factors likely also play a role in the fecundity of the whales, including lack of prey, driven by human causes. Hopefully this research helps secure a future for these beautiful creatures.