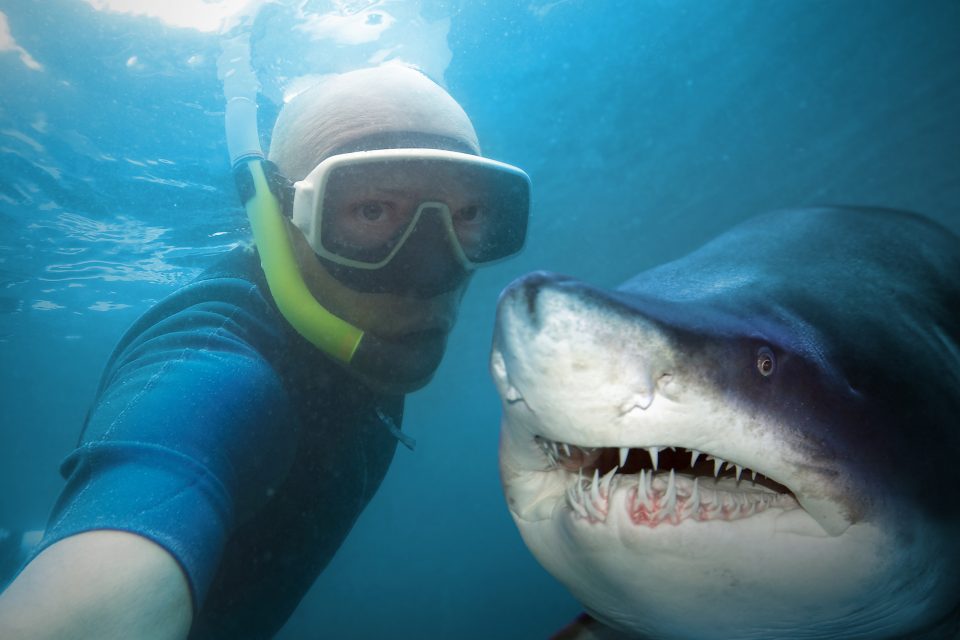 Dying for the perfect selfie: Animal attacks and social media

Earlier this month, a woman was attacked by a jaguar at a zoo in Phoenix, Arizona. According to Cronkite News, the woman allegedly stepped over a safety barrier to take a selfie next the caged jaguar that then grabbed her arm in its mouth.  Another zoo visitor threw a water bottle through the cage bars to distract the cat long enough for the woman to escape.

Unfortunately, incidents like this are part of the new normal selfie culture.  People sometimes risk their lives to take the perfect selfie, a trend that seems to draw into question how firm our collective grasp of reality is and what else we’re willing to endanger for image beyond our persons.

Rightfully, the blame for the jaguar attack was assigned to the woman taking the selfie, not the cat.  But it’s not always so fair for the animal, though. We have a history of killing dangerous animals that attack us, even when objectively, the attack is understandable.  Unfortunately, an animal attack of someone taking a selfie isn’t an isolated instance.

In 2015, CNN reported on a woman who turned her back on bison in Yellowstone National Park to take a selfie and was subsequently attacked by the large mammal.  The attack was one of three that resulted from tourists taking photos of bison in the park that season, even though park visitors are warned to keep their distance from the iconic animals.

Reporting on multiple studies, the Orlando Sentinel says that more people are killed by foolish selfies than by shark or alligator attacks.  From 2011 to 2017, selfies claimed on average 43 lives a year. A huge increase in selfie-caused death occurred from 2014-2015 to 2016-2017, and the growth has been attributed to more selfies and better selfie technology.

While death for a selfie is always a pointless tragedy, if someone falls off a cliff taking a selfie, they’re the only victim.  When a person is attacked by an animal, the situation is more complicated.

A Washington Post piece from 2016 asked the question ‘should wild animals that attack people be killed?’ The report describes a bear attack on a marathon runner.  The runner was injured but not killed by the bear, a mother with small cubs who was likely startled by the runners quick movement. The bear was put down despite only acting in fear to defend her cubs in normal bear fashion.  Under New Mexico State law, where the attack took place, a bear is required to be put down after attacking a person, no matter the circumstances.

Other instances of a single animal attacking or killing a person involve more than one animal being killed, because which animal is the offender is uncertain.  When a toddler in Florida was killed by an alligator, at least six gators were killed in turn. When a mountain lion pounced on a child in Colorado, two of the cats were killed.  The Orlando Sentinel reports that there’s a pattern of wildlife officials killing more alligators after a high profile attack, despite the rarity of human fatalities caused by alligators in general.  More than 300 alligators have been removed from Disney property and killed since 2009. Selfies and other such foolhardy behavior can further deteriorate already fraught relationships between humans and wildlife.  In the end, the wildlife suffer more than the people who engage in risky behavior, including selfie-taking.

With the costs so high for humans and wildlife alike, we must ask, why do people continue to exhibit such reckless behavior?  A lack of engagement in the real world, a blurring of the lines between social media and the world around us may be to blame.

The Washington Post reported in 2015 how the misunderstanding of video footage by the LAPD lead to a fatal police shooting.  Media has always distorted views, news, and propaganda, and that shaping of mass perception is nothing new.  What is new is the desire to be watched, to be the media changing behavior patterns, with consequences even for those who aren’t engaged in social media, including animals.  With reality so distorted for those taking selfies as well as those looking at them online, it’s fair to ask whether people are even seeing the animals (or dangerous geographic features) that are photographed.

In The White Tigers of Cincinnati, an essay in David Quammen’s book, Wild Thoughts From Wild Places, the author reflected on wildlife voyeurism before the selfie age in a way even more relevant today,

“People watch the films, they visit the zoos, and by the mesmeric power of these vicarious experiences they come to carelessly believe that the Bengal tiger (or the white rhino, or the giant panda, or the diademed sifaka) is alive and well because they have seen it.  Well I’m sorry but they haven’t seen it.  They’ve seen images; they’ve seen taxidermy on the hoof.  And the wellness, even the aliveness, is too often a theatrical illusion.  Zoos are not fragments of the world of nature, no. They are substitutes.”

If that can be said for zoos, what can be said for wildlife images on social media?  Ecowatch lists five instances of zoo animals being killed after encounters with humans.  There are many more examples of animals outside of zoos being killed after encounters with humans.  If current trends in selfie taking continue, we should expect more animals will be put down after attacking humans as well.  It seems likely that the selfies that don’t illicit an animal attack will encourage more risky behaviors around dangerous animals, for selfies or simply out of cluelessness.

It may not matter to some whether they have a real connection with wildness or non-human animals but the consequences go far beyond a simple world view.  For wildlife in captivity or not, a selfie can lead to a deadly encounter with humans. Next time you happen upon an animal, dangerous or not, and your hand instinctively twitches towards that phone, pause.  Consider just dwelling in the moment; keep it for yourself. Some things truly cannot be shared.