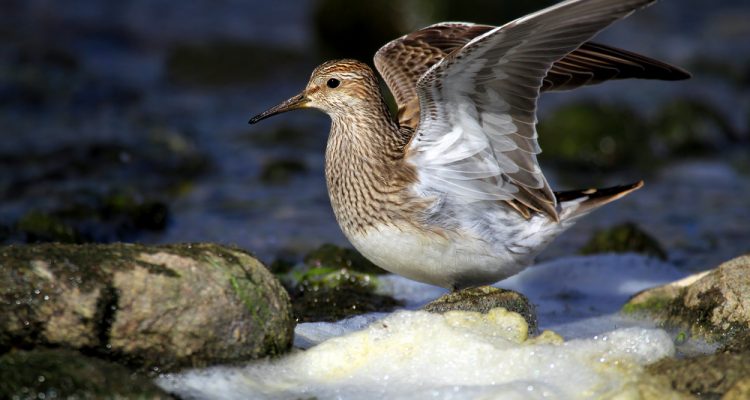 Ready for some creepy crawly current events? The news for January 10, 2017 brings us stories about the snake-based diet of giant spiders, the secret love lives of pectoral sandpipers, seafood with a deadly secret, and more.

They would fly 100 miles and they would fly 100 more. Male pectoral sandpipers are willing to fly just about any distance to find a mate, according to a new study by scientists at the Max Planck Institute for Ornithology.

The average male sandpiper flies about 1,900 miles per breeding season to court various females, the study found. And that’s after flying from South America to their breeding grounds in the Arctic tundras of Alaska.

Some go above and beyond, though. One of the Alaskan shorebirds they were tracking logged about 8,100 frequent flier miles in just four weeks on his quest for love, the scientists said.

The problem is that female sandpipers only mate once or twice per season, and they’re only fertile for a short time. The males fly non-stop and barely sleep during mating season, the scientists said.

The study is an interesting look at how pectoral sandpipers reproduce.

Scientists with the Federal University of Santa Maria in Brazil were looking for tarantulas when they interrupted one of the giant spiders during a meal.

They turned over a rock, and found the spider munching on an Almaden ground snake. It’s the first time one of the tarantulas has been caught preying on snakes in the wild.

The spider likely attacked the snake after the hapless reptile tried to enter its lair, the scientists said. Grammostola tarantulas like this one have both fangs and venom, but the venom has never been studied so scientists don’t know how toxic it is, they said.

The researchers reported the bizarre feast – with some graphic photos – in the journal Herpetology Notes.

How safe is your shellfish?

Some shellfish is no longer entirely safe for human consumption, scientists have found. And if ocean temperatures keep rising, that may become more common, they said.

A new study by Oregon State University researchers found that warmer waters lead to more frequent blooms of phytoplankton, a type of micro-algae. The tiny creatures produce a neurotoxin called domoic acid, and when marine creatures like crabs and anchovies eat them, that neurotoxin begins working its way up the food chain.

Domoic acid events have been linked to illness and death among otters, sea lions, and other marine mammals, the scientists said. If ingested by humans, it can lead to stomach problems, seizures, and memory loss.

Scientists recently identified two new, rare species of phytoplankton. Unlike other phytoplankton, the two species seem to thrive in warm, low-nutrient waters. The discovery was shared in the journal Current Biology.

Phytoplankton are also responsible for close to half of all biological uptake of carbon dioxide, a greenhouse gas linked to climate change, and serve as the basis for many marine food chains, the scientists added.

Even if humans manage to stop carbon emissions in their tracks, the seas will still rise, researchers from the Massachusetts Institute of Technology found.

Part of that is due to carbon dioxide. Once it’s in the atmosphere, it can stay there for centuries, the scientists said. The other cause is ocean inertia. Once the ocean has heated up, it’s an extremely slow process for it to lose that heat, the scientists said. Warmer waters cause sea ice to melt and ocean waters to expand.

Every day, dozens of satellites orbit around the Earth, collecting all kinds of data. Some of that is information about the weather, and scientists want to make that data more useful and available to everyone.

The Global Space-based Inter-Calibration System, or GSICS, is an international effort by 15 agencies to collaborate on weather data from satellites. They’ve been working to collect and analyze satellite data, so that they can determine the accuracy of the information they share.

For example, they once found that two different satellites showed a 3-degree temperature difference on the same weather events.

Calibrating satellites against tools like NASA’s Atmospheric Infrared Sounder can reduce that margin of error to about 0.1 degrees, GSICS scientists said, greatly improving the satellites’ accuracy.