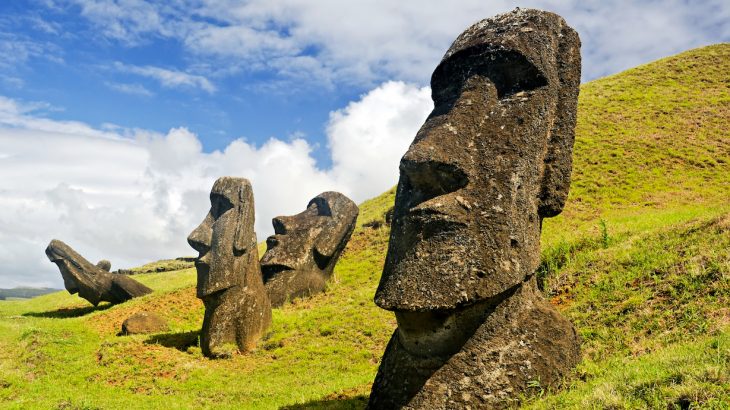 Easter Island statues may have marked areas with drinking water

Researchers are still trying to explain the mysterious giant stone heads on Rapa Nui, also known  as Easter Island, off the coast of Chile. While there have been many hypotheses about the statues and the Rapa Nui people that erected them, the heads have created more questions than answers

Now, a new study published in the journal PLOS ONE suggests that the statues may have been used to mark important resources like sites where drinking water was available

A team of researchers led by the University of Oregon surveyed the eastern region of the island and reviewed data on the statues, agricultural plots, and marine and freshwater resource locations.

The statues of Rapa Nui are an anomaly and represent one of humanity’s greatest achievements of the prehistoric era. Over the course of 500 years from the 13th through the 18th century, Rapa Nui islanders built nearly 1000 anthropomorphic statues and 300 massive stone platforms. Some of the statues on Rapa Nui are 40 feet tall and weigh 75 tons.

The statues were built on an island with few resources including limited access to freshwater and irregular precipitation. The soils also lack nutrients, and the island is not surrounded by large patches of coral reefs.

All of these would have presented challenges for the Rapa Nui people, but historical evidence suggests the ancient civilization thrived until Europeans first came to Rapa Nui.

In this recent study, the researchers argue that the Rapa Nui people were a peaceful civilization that shared resources and that the statues, also called ahu, marked areas that had sources of valuable drinking water.

“The monuments and statues are located in places with access to a resource critical to islanders on a daily basis – fresh water,” Terry Hunt, a co-author of the study from the University of Arizona (UA), said in a UA news article. “In this way, the monuments and statues of the Islanders’ deified ancestors reflect generations of sharing, perhaps on a daily basis, centered on water, but also food, family and social ties, as well as cultural lore that reinforced knowledge of the island’s precarious sustainability.”

Hunt along with the rest of the researchers used quantitative spatial modeling to examine any potential connection between the statue locations and important resources like fresh groundwater.

A pattern began to emerge, and the ahu were located in areas where people would have been able to access drinking water.

“Many researchers, ourselves included, have long speculated associations between ahu, moai and different kinds of resources –  water, agricultural land, areas with good marine resources, etc.,” said Robert DiNapoli, the lead author of the study. “Our study presents quantitative spatial modeling clearly showing that ahu are associated with freshwater sources in a way that they aren’t associated with other resources.”