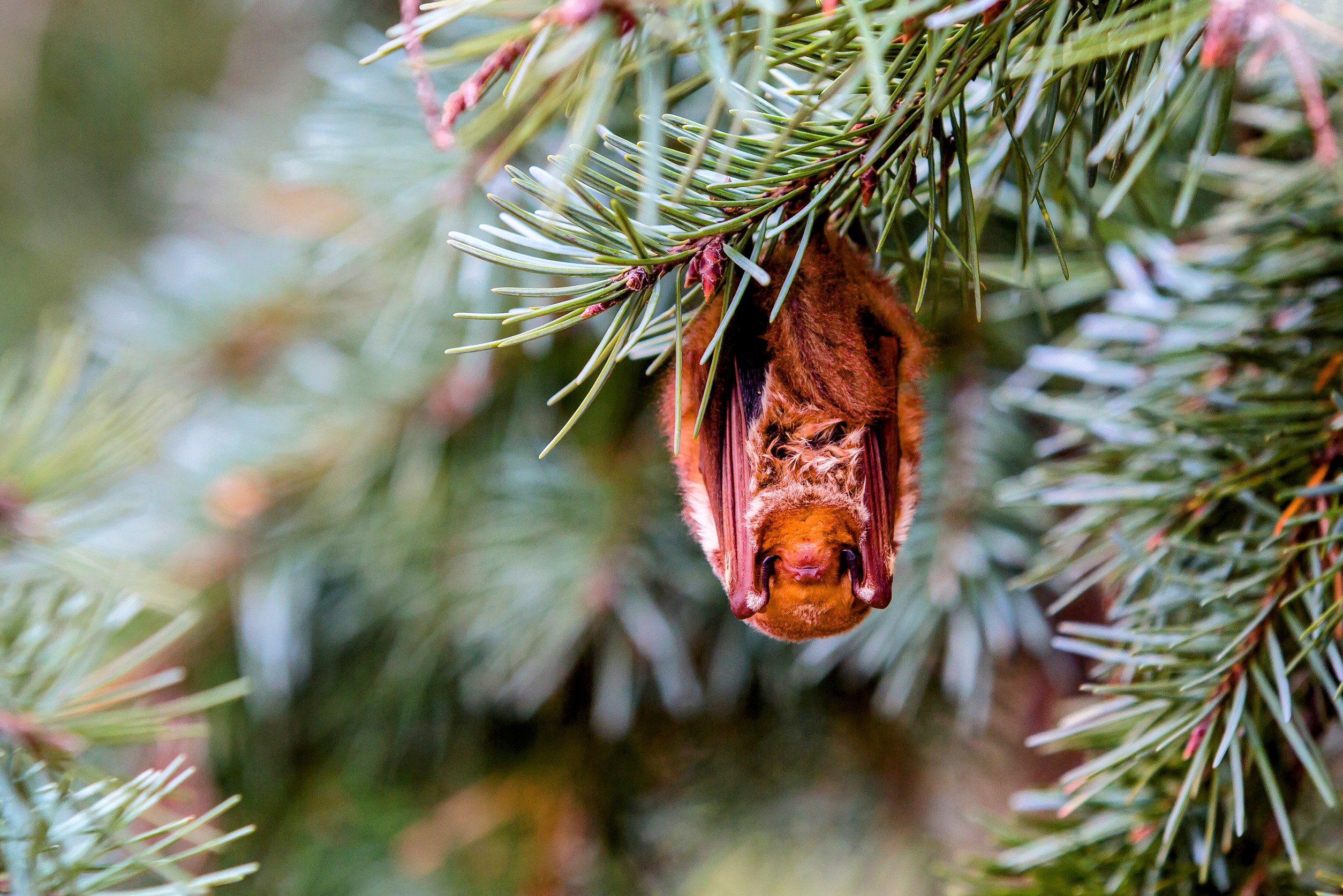 The loss of forests is not good news for bats. Clearance and harvesting of trees threaten the habitat of many bat species that make their homes in forests. Although policy makers understand the importance to biodiversity of in-tact forest habitats, it is unlikely that timber harvesting will ever stop. Humans need wood and so most forest areas will undoubtedly end up being managed for various human needs, including tree growth and removal, hunting and recreation.

This applies also to forests in eastern North America, where bats are additionally threatened by high mortality rates due to white-nose syndrome and collision with wind turbines. Timber harvest could affect bats either positively or negatively in these forests, depending on the management approach and the ecological needs of each species. Although there have been many previous studies on the potential impact of timber harvest on bats, there are many gaps in our understanding due, in part, to the logistical challenges inherent in studying these nocturnal, highly mobile animals.

According to recent University of Illinois research, certain forest management strategies actually suit the habitat requirements of eastern red bats (Lasiurus borealis), meaning that this species is likely to co-exist successfully with, and even benefit from, managed forests in future. The study made use of radio telemetry to track the movements of 26 eastern red bats at a managed Indiana forest site. The study lasted three years and bats were tracked at various times during this period. The data were used to identify where the bats most often foraged and roosted.

“With white nose syndrome causing major declines in many bat species, the eastern red bat has become the most commonly detected bat in many Midwestern forests, making up 70 to 80 percent of the captures in our Indiana study site. So from that perspective, they probably have the most sizeable effect on the forest. To manage the landscape holistically, we should consider species that might have a disproportionate impact,” says Elizabeth Beilke, postdoctoral researcher in the Department of Natural Resources and Environmental Sciences (NRES) at U of I, and lead author on the study.

The researchers attached tiny radio transmitters to as many red bats as they could capture, and tracked them between May and August, 2017–2019, in two state forests in south-central Indiana. The 26 bats included 18 females and 7 males (one female was tracked twice). During monitoring, the researchers installed themselves at spots on top of ridges to pick up the bats’ signals every five minutes, while the animals were active. They said this approach gave different data from what is normally obtained using acoustic cues only.

Professor Joy O’Keefe says it’s an improvement over acoustic methods, where researchers listen for bat calls. With acoustics, researchers can’t distinguish individual bats, potentially missing important differences due to sex, age, health, and other factors. It is sometimes challenging to identify bat species from acoustic cues and, furthermore, bats do not always echolocate while they fly. Acoustic cues are also more difficult to detect in denser vegetation.

The results of the telemetry tracking and analysis, published in the journal Forest Ecology and Management, showed that eastern red bats foraged over a relatively small area (81 ha or 200 acres) and traveled a maximum distance of 1404 m from their roosts. They favored foraging near maintained openings in forest, near recent regeneration openings, roads, and ponds within the study area. In addition, they roosted preferentially near maintained openings, recent regeneration openings, and ponds, switching roosts every two days. They selected large, mature trees for roosting, and preferred to roost where vegetation was less dense.

“Red bats are selecting and using parts of the forest that are associated with forest management, including recent timber harvests and maintained forest openings. They’re also using ponds, roads, and ridges more than we’d expect, based on availability. Our data suggest these bats can coexist with forest management,” Beilke says. “This is heartening because timber harvest isn’t going away; it’s a human need. But this work demonstrates that management practices like timber harvest aren’t inherently harmful to bats and could even benefit certain species.”

The results are similar to O’Keefe’s previous findings for endangered Indiana bats and threatened northern long-eared bats in the same hardwood ecosystem site in Indiana. Those bats preferentially foraged and roosted near thinned areas, small patch cuts, and ponds.

“It seems like the more recent practice of harvesting smaller sections of the forest is a better approach, not only for regenerating oaks and hickories, but also for these bats. That’s opposed to large clear cuts, where we take out a lot of the forest at once. Oaks and hickories also respond well to shelterwood harvests, which offer shade to tiny tree seedlings during hot, dry summers. These partially shaded forest patches are the kinds of places bats prefer, as well,” O’Keefe says.

The researchers were encouraged by the finding that red bats can coexist with forest management practices, and may even benefit from them. They were delighted to capture one female bat twice during their study; not only did they capture her at the same site for two years running, but also she frequented the same spots in the forest in both years. O’Keefe says, “I think that’s a testament to the forest. It must be good quality habitat for bats to migrate to winter sites and to come back.”

Although red bats are becoming the most common bat species in many forests, and they’re less susceptible to white nose syndrome due to their solitary roosting habits, the species is far from entirely safe.

“Unfortunately, eastern red bats die in huge numbers at wind turbines and a few recent papers have suggested they are declining range-wide. This is a shame because they’re very different from other bat species in this region. They roost solitarily in foliage, exposed to the elements, and give birth to three to four pups at once. Plus, they’re devastatingly cute,” Beilke says.

The authors conclude that, when considering habitat for eastern red bats in central hardwood forests, land managers should work to maintain large tracts of mature (>90 years old) forest, interspersed with young regeneration openings and provisions of perennial water, such as ponds. This will ensure suitable habitat for these fascinating small mammals.