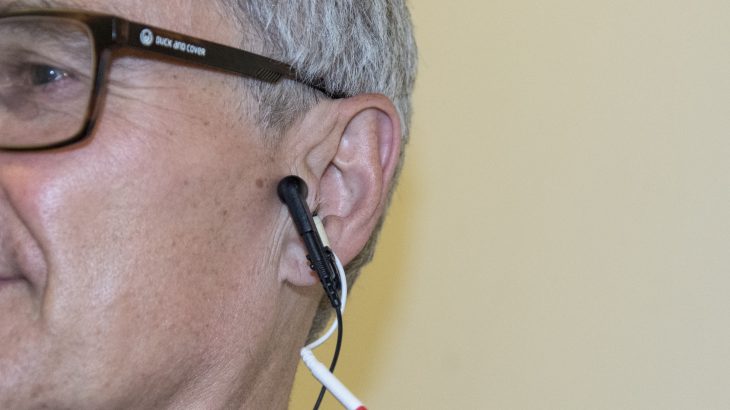 A therapy that involves tickling the ear with a small electrical current has been found to rebalance the autonomic nervous system for adults over the age of 55. Individuals who received a short daily therapy for two weeks reported improvements in mood, sleep, and overall quality of life.

Known as transcutaneous vagus nerve stimulation (tVNS), the treatment delivers a small electrical current to the ear that transmits signals to the nervous system through the vagus nerve.

According to researchers at the University of Leeds, the therapy may help protect people from chronic diseases that are associated with aging such as high blood pressure, heart disease, and atrial fibrillation. The team demonstrated that this type of stimulation has the potential to conserve health by recalibrating the body’s internal control system.

“The ear is like a gateway through which we can tinker with the body’s metabolic balance, without the need for medication or invasive procedures. We believe these results are just the tip of the iceberg,” said study lead author Dr. Beatrice Bretherton.

“We are excited to investigate further into the effects and potential long-term benefits of daily ear stimulation, as we have seen a great response to the treatment so far.”

Previous research from Leeds has shown that the electrical stimulation of the vagus nerve at the ear improved the balance of the autonomic nervous system in healthy 30-year-olds.

In the current study, the team set out to explore whether tVNS could benefit adults over 55, who are more likely to have unbalanced autonomic systems that could contribute to age-related health issues.

For 29 healthy participants, the therapy was effective in rebalancing and improving autonomic function. In addition, some of the individuals experienced mental health and sleeping benefits. The researchers found that these improvements were the most pronounced among those who displayed the greatest imbalance at the start of the study.

The research is published in the journal Aging.