Elephant sanctuary attractions may not be as ethical as they seem • Earth.com 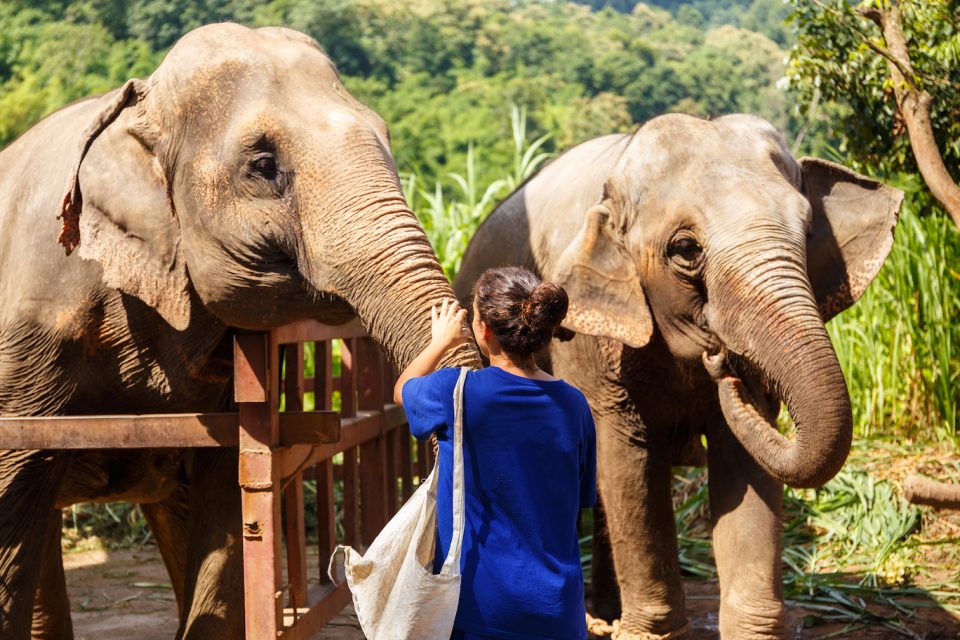 Elephant sanctuary attractions may not be as ethical as they seem

As travelers become more conscientious, traditional animal attractions are increasingly being rejected. These attractions are being replaced with voluntourism and animal sanctuary experiences. While these experiences appeal to ethical tourists, they can be crueler than they seem.

There has been a clear shift in the way people interact with captive wild animals in recent years. While circuses used to be a grand spectacle, a 2015 Gallup poll showed that 69% of Americans are concerned with how animals are treated in the circus. Just last year, Ringling Bros. Circus closed their show after 146 years. Americans also showed high levels of concern with other animal attractions such as animal sports and contests, aquariums and zoos.

Travelers now want to visit wild animals in a more natural and humane setting. This new wave of animal tourism provides travelers with a feel-good experience, but these experiences can be marked by the same inhumane conditions as traditional animal attractions.

The elephant camps throughout Thailand, which offer travelers the opportunity to ride, bathe and watch elephants, are a prime example of this phenomenon.

Elephant camps came to rise after commercial logging was banned in Thailand in 1989. Elephants in the country had been trained to work in the logging industry transporting people and logs. The ban left many captive elephants displaced as they could no longer work but were too accustomed to people to be released into the wild. Many elephant handlers turned towards the tourism industry. There are now an estimated 200 elephant camps in Thailand alone.

While many of the elephants at the camps came from the logging industry, some have been captured from the wild. A 2014 report by the wildlife trade monitoring group TRAFFIC found that an estimated 79 to 81 wild elephants were illegally captured for sale into the tourism industry in Thailand during a two-year period.

Today, Thailand is home to fewer than 3,500 Asian elephants in the wild and 3,500 to 4,000 elephants in captivity. The Asian elephant is currently listed as endangered with populations decreasing throughout the world. Illegally smuggling elephants from the wild could have negative impacts on elephant populations, especially considering the high commercial value of young individuals.

In addition to concerns on the conservation of elephants, animal advocates point to the inhumane living conditions of elephants at the camps. A report by World Animal Protection found that nearly 75% of the elephants they studied living in Asian elephant camps lived in poor conditions.

The report notes “When not giving rides or performing, the elephants were typically chained day and night, most of the time to chains less than 3m long. They were also fed poor diets, given limited appropriate veterinary care and were frequently kept on concrete floors in stressful locations near loud music, roads or visitor groups.”

A 2015 study published in PLOS One found similar results. The study examined the welfare of Asian elephants, Pig-tailed macaques and tigers at tourism venues in Thailand. Eighty-six percent of the elephants were kept on short chains when they were not interacting with tourists and 25.6% were kept on concrete ground which can cause health issues in elephants. Further, over one-third of the elephants were kept isolated from each other. For the highly social species, this can cause severe distress and boredom.

The tourism industry may be able to help the both local people and elephants if it is done right. Travelers’ desire to visit the beautiful giants in person will not dissipate soon. Tourism venues can provide these awe-inspiring experiences and protect elephants in the country by adhering to strict welfare standards.

Responsible Travel, a travel website which promotes responsible tourism, recommends avoiding places where elephants are forced to perform or give rides. The website screens elephant sanctuaries to ensure they are humane before featuring them on their website. Their recommendations mirror the results in the World Animal Protection report which found that the elephants with the highest welfare conditions were living at camps that did not allow rides or performances.