Circus closure prompts us to look at the history of performing animals • Earth.com 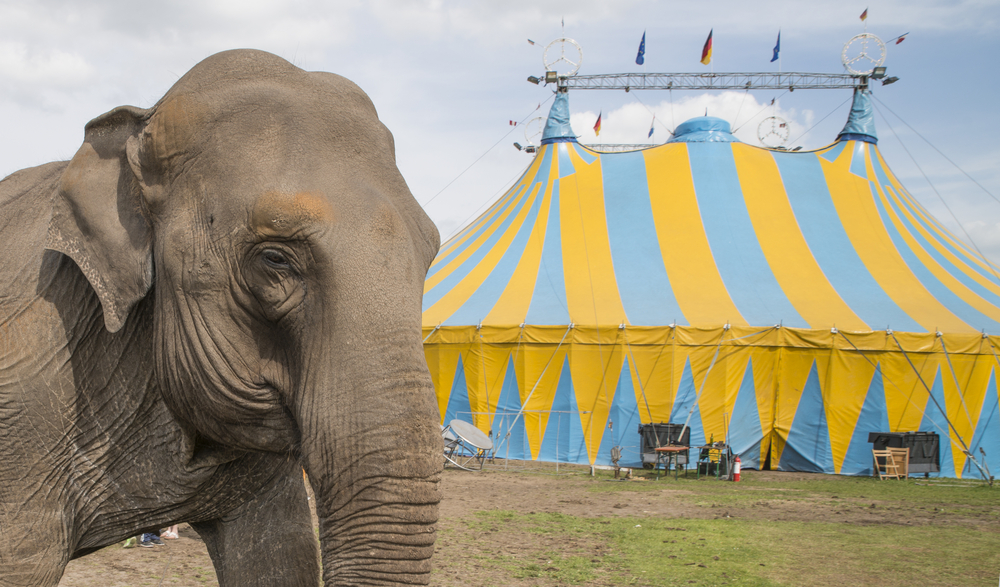 Performing animals were at the center of the success of the “greatest show on earth.” The announcement from Ringling Bros. and Barnum & Bailey Circus came as a surprise to some: after being active for more than a century, they are closing down their circus.

“Ringling Bros. ticket sales have been declining, but following the transition of the elephants off the road, we saw an even more dramatic drop. This, coupled with high operating costs, made the circus an unsustainable business for the company,” Chairman and CEO Kenneth Feld said in a statement posted on the circus’ website.

Circus lovers were saddened by the news, but it has some animal rights groups cheering.

“It’s a win for the animals,” Ed Stewart told the Sacramento Bee. Stewart co-founded the Performing Animal Welfare Society in 1984 with Pat Derby, who worked with captive animals in Hollywood.

Derby, who died of cancer in 2013, was inspired to work for animal rights after witnessing animal abuse on the sets of “Gunsmoke,” “Flipper,” and other shows, according to the PAWS website.

“PAWS applauds the decision by the Feld family to bring the curtain down on the Ringling Bros. and Barnum and Bailey Circus,” the nonprofit wrote on Facebook. “Public opinion has radically changed, favoring an end to the use of wild animals for entertainment, whether it’s elephants and tigers in circuses or orcas in marine parks.”

Over the years, PAWS and other animal rights groups – including the American Society for the Prevention of Cruelty to Animals and the Human Society of the United States – led protests and lawsuits targeting the circus.

“Ringling Bros. has changed a great deal over a century and a half, but not fast enough,” Wayne Pacelle, Humane Society president and CEO, said in a statement. “It’s just not acceptable any longer to cart wild animals from city to city and have them perform silly yet coercive stunts.”

In the late 1990s, activists with the Humane Society and other groups filed a lawsuit claiming that Ringling Bros. and other circuses used bullhooks and chains on their elephants, in addition to neglecting the animals.

In 2012, after 14 years, Ringling Bros. won a $16 million settlement in court over the allegations. Feld Entertainment, the circus’ parent company, received the payment in May 2014.

Despite their win in court, however, the company was feeling the pressure. In recent years, California and Rhode Island banned the use of bullhooks.

In October 2016, Feld Entertainment retired the Ringling Bros. elephants, a plan they’d first suggested at the beginning of the year. The elephants now live at the 200-acre Ringling Bros. Center for Elephant Conservation.

While animal rights groups celebrate, others are saddened by the circus closing.

The elephants had been with the circus for more than 140 years, since the beginning.

But in recent years, the elephants – like SeaWorld’s performing orcas – have been at the center of a debate over working animals.

Abuse of performing animals shouldn’t happen, but it does. When the abusers are caught, a scandal is sure to follow. After all, we bond to the animals that appear on our movie screens or in the shows we see live.

That’s the point – if we don’t feel a connection to performing animals, we’re not going to be emotionally invested in their performances.

That backfires on the culprits when abuse is uncovered – when we care about animals, we care if they’re being treated badly.

Working animals aren’t always mistreated, though. Some, in fact, enjoy their jobs. Trainers aren’t all villains, either.

Take The Acro-Cats, for example. The cats perform amazing tricks for audiences around the U.S., but they’re felines on a mission. Their human staff use the act to raise awareness about two causes close to their hearts: pet adoption from shelters, and cat training.

If the circus cats aren’t in the mood to deal with performing for an audience, they don’t have to.

“Some days they perform, sometimes they don’t,” circus founder and cat trainer Samantha Martin said in the documentary “The Wonderful World of Cats.” “It’s free will. We open up the cage, and if they don’t come out, that means they don’t want to come out. We close the cage and move on to the next trick.”

Animals find fulfillment in other careers, too.

The Donkey Sanctuary matches up donkeys and children for animal therapy. The work is good for the children, but it’s good for the donkeys, too. They get some affection and attention from each child they help, and the sanctuary works to help donkeys, putting their welfare first.

Dogs around the world are employed in dozens of different jobs, and while some are mistreated – in the case of fighting dogs, horribly – many are thrilled for the chance to work with people.

Even circuses can be successful without exploiting animals.

Cirque du Soleil is the obvious example. The Montreal-based circus has performed to sold-out shows around the world and is a permanent attraction in New York, Las Vegas, and other cities.

Circus Vargas once featured animal acts, but successfully retired them in 2010. They’ve made ending abuse a big part of their business model. Not just animal abuse, either – they also support the anti-child abuse organization Childhelp.

These groups show that it’s entirely possible to train working animals without abusing them and to have successful circuses without animals at all.