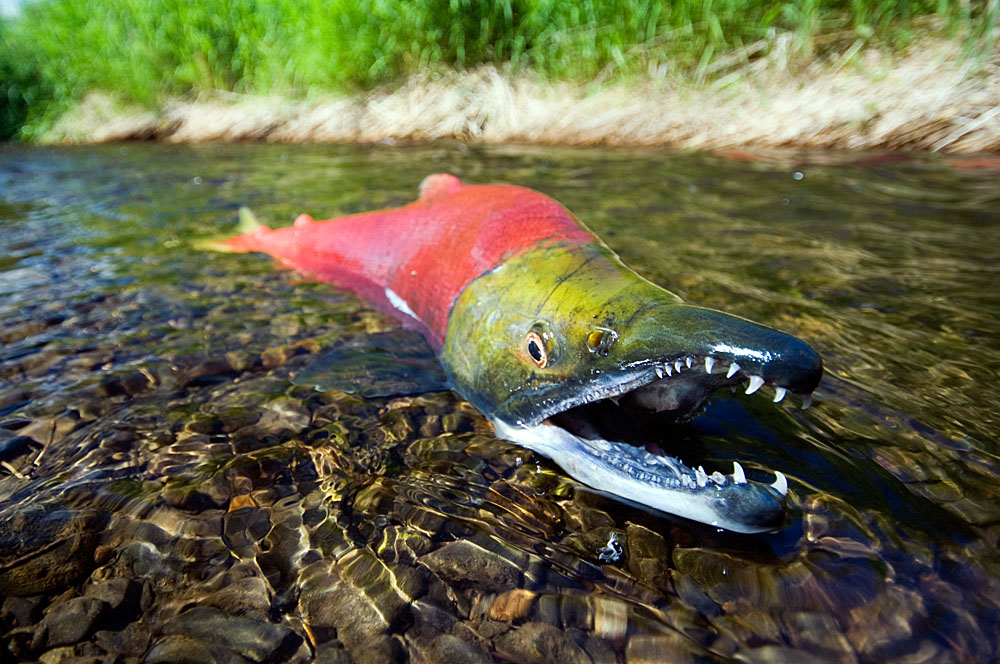 Roughly 15 million years ago, Pacific coastal waters hosted a fascinating species of extinct giant salmon who boasted terrifying spike-like teeth. These extinct beasties were massive compared to the salmon we know and love today, reaching 9 feet in length and weighing up to 400 pounds. Their sharp teeth were over one inch long.

California State University researchers have been studying these fish, revealing clues into their ancient lives.

Much like their modern cousin the Pacific salmon, giant salmon were presumed to be filter-feeders, meaning their teeth were not for hunting. As modern salmons encounter physical changes before migrating upriver to spawn, where males fight to defend their fertilized eggs, it was hypothesized that these extra-large teeth could be part of the mating ritual.

Dr. Julia Sankey led a team of researchers to compare 51 different fossils. The teeth of these salmon found in past freshwater environments consistently had longer teeth with much larger bases showing signs of wear. Fossil teeth found in saltwater deposits were much smaller and less worn, suggesting their teeth had changed before they migrated upriver.

These results prove the hypothesis. Researchers believe these gargantuan gnashers were used to intimidate and eventually fight any creatures who came near their fertilized eggs. “These giant, spike-toothed salmon were amazing fish. You can picture them getting scooped out of the Proto-Tuolumne River by large bears 5 million years ago,” said Dr. Sankey. “Scientifically, our research on the giant salmon is filling in a gap in our knowledge about how these salmon lived, and specifically, if they developmentally changed prior to migration upriver like modern salmon do today.”

Dr. Sankey and colleagues presented their findings at this year’s meeting of the Society of Vertebrate Paleontology in Salt Lake City, Utah.