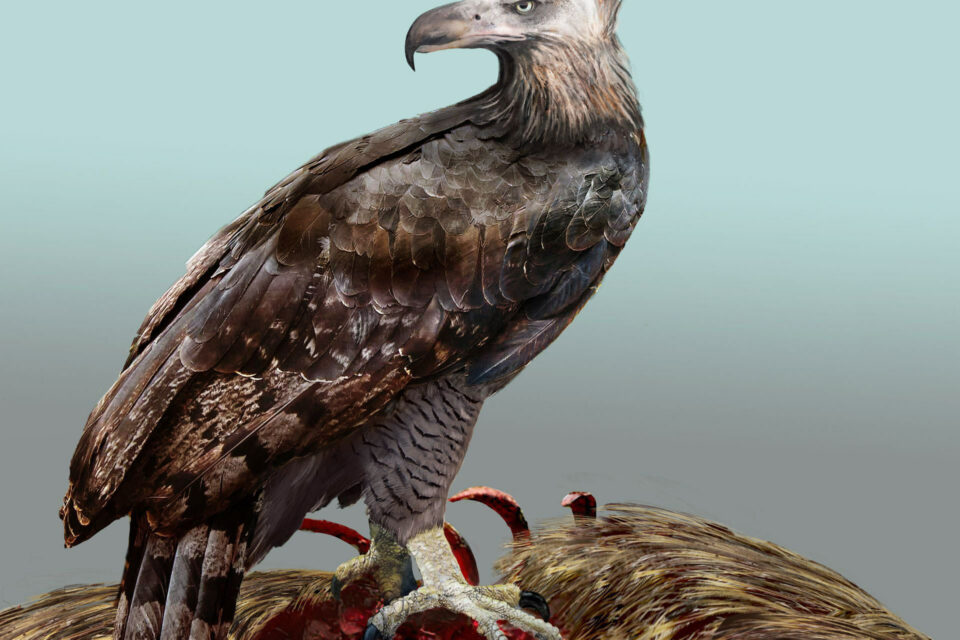 The extinct Haast’s eagle or harpagornis (Hieraaetus moorei) is the largest known eagle, having a ten-foot wingspan and four-inch talons. It roamed New Zealand’s skies around 800 years ago and was formally described for the first time by Julius von Haast in 1872.

Since then, scientists have debated whether the extinct bird was a predator that killed other animals for food, or a scavenger that fed upon already dead prey.

A new study led by the University of New England, Australia, and the Canterbury Museum, has found that, in fact, Haast’s eagle exhibited behaviors similar to both predators and scavengers.

The scientists compared the skull, beak, and talons of Haast’s eagle with those of five living meat-eating birds – the whistling kite, the little eagle, the wedge-tailed eagle, the Cinereous vulture, and the Andean Condor.

While its beak and talons appeared similar to living eagles, the shape of its neurocranium was most similar to the Andean Condor, a South American vulture which is known to feed upon the soft internal organs of carcasses. These findings suggests that Haast’s eagle may have also eaten this way.

“Most eagles hunt prey that is smaller than them, but Haast’s Eagle was going after moa that could weigh up to 200kg – more than 13 times their own body weight. Condors also often eat animals that are much larger than them, so it makes sense that they’d have similar feeding habits,” explained study co-author Paul Scofield, a paleontologist and senior curator of Natural History at the Canterbury Museum.

“When we picture a Haast’s Eagle feeding we can imagine them swooping down on a moa, grabbing on with those huge talons and using its powerful beak to deliver the killing blow. Once the moa was down, the eagle would go straight for the back of the skull and for the guts and other soft organs.”

This new study, published in the journal Proceedings of the Royal Society B, paints a more complex picture of this fascinating creature, showing that it shared traits with both predators and scavengers.