'Extra' knee bone on the rise thanks to modern diet • Earth.com 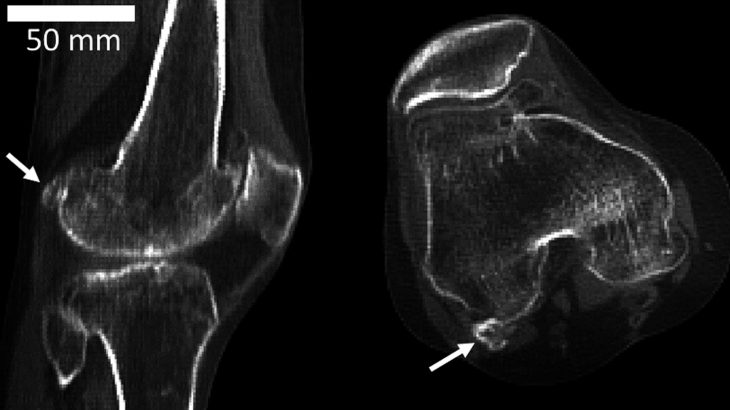 ‘Extra’ knee bone on the rise thanks to modern diet

The knee bone’s connected to the … other knee bone?

That’s not how the song traditionally goes, but researchers are finding that it’s increasingly true. A number of people alive today may have an extra knee bone called a fabella – a number that jumped sharply from a hundred years ago.

The discovery was made by a team of researchers from Imperial College London, who have published their findings in the Journal of Anatomy.

“A total of 52.83 percent of our individuals and 44.34 percent of our knees had fabellae detectable by computed tomography scanning,” the team wrote in their study. “Men and women were equally likely to have a fabella, and bilateral cases (67.86 percent) were more common than unilateral ones (32.14 percent).”

So what has triggered the revival of the extra knee bone?

The fabella seems to be making a comeback thanks to the modern diet. More humans around the world have access to a nutritious diet, and height and weight have gone up thanks to that. The obesity epidemic has also led to increases in weight globally.

Sesamoid bones are known to grow in response to pressure, like a joint needing to deal with added force and stress. That may have triggered the knee bone to reappear, to help the joint better.

But it doesn’t seem to be doing that.

“The fabella may behave like other sesamoid bones to help reduce friction within tendons, redirecting muscle forces, or, as in the case of the kneecap, increasing the mechanical force of that muscle,” lead author Dr. Michael A. Berthaume told the BBC. “Or it could be doing nothing at all.”

Regardless of its purpose, the extra knee bone does seem to have a downside. Human knees are no longer built to work with the little bone. People with osteoarthritis of the knees are about twice as likely to have a fabella, and it can interfere with knee replacement surgery.

The researchers plan to keep studying the fabella, to see who is most likely to develop the knee bone and what it can reveal about human evolution and nutrition.