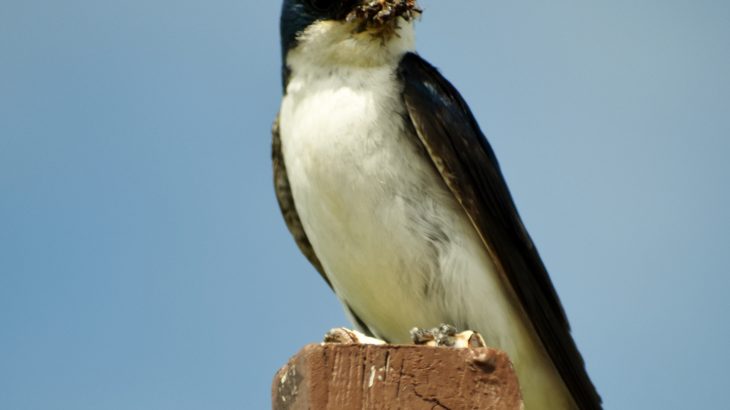 Aerial insectivores are birds that capture their insect prey with their wings. Over the last decade, most species of aerial insectivores have been significantly, and often dramatically, declining across North America. A new study has revealed that the birds may be having a harder time accessing their preferred prey due to agricultural intensification.

Experts at the University of Saskatchewan investigated how the diets of Tree Swallows may be affected by agriculture. The team monitored Tree Swallow nest boxes at agricultural and grassland sites in 2012 and 2013, collecting blood samples from the birds to determine what they were eating.

“We set up this study to see if insectivorous swallows would be disadvantaged in agricultural croplands by shifting their normally aquatic diet to terrestrial insects to compensate for lower food availability. We were surprised that the birds did not generally do this,” said study co-author Christy Morrissey.

“Adult swallows in particular were heavily reliant on aquatic prey regardless of land use type. At the grassland dominated site, in fact, they fed their nestlings a wider variety of prey from both aquatic and terrestrial origin.”

The findings suggest that wetland habitat may provide a buffer against the negative effects of agriculture. On the other hand, birds living in cropland weighed less on average than the grassland-dwelling swallows.

“Diet did not seem to influence body condition, but birds in cropland sites were lighter on average which may signal they are working harder in croplands to obtain their preferred aquatic prey,” said Morrissey. “This work shows how important wetlands are for maintaining birds in agricultural landscapes and these are important reservoirs for conserving biodiversity in an otherwise heavily altered landscape.”

Dave Shutler is an expert on Tree Swallow ecology at Acadia University who was not involved with the study.

“Grasslands are one of the most imperiled ecosystems on the planet because their rich soils are ideal for agriculture,” explained Shutler. “Pesticides and fertilizers are applied in ever-increasing quantities, which has serious implications for organisms that live there.”

“This study compared the diets of Tree Swallows in natural grasslands and croplands, each of which had roughly similar wetland densities. Although diet composition was similar in both areas, it appears that diet quality was better in the natural grasslands, because birds there were heavier and in better condition than those in the cropland.”

The research is published in the journal The Condor: Ornithological Applications.