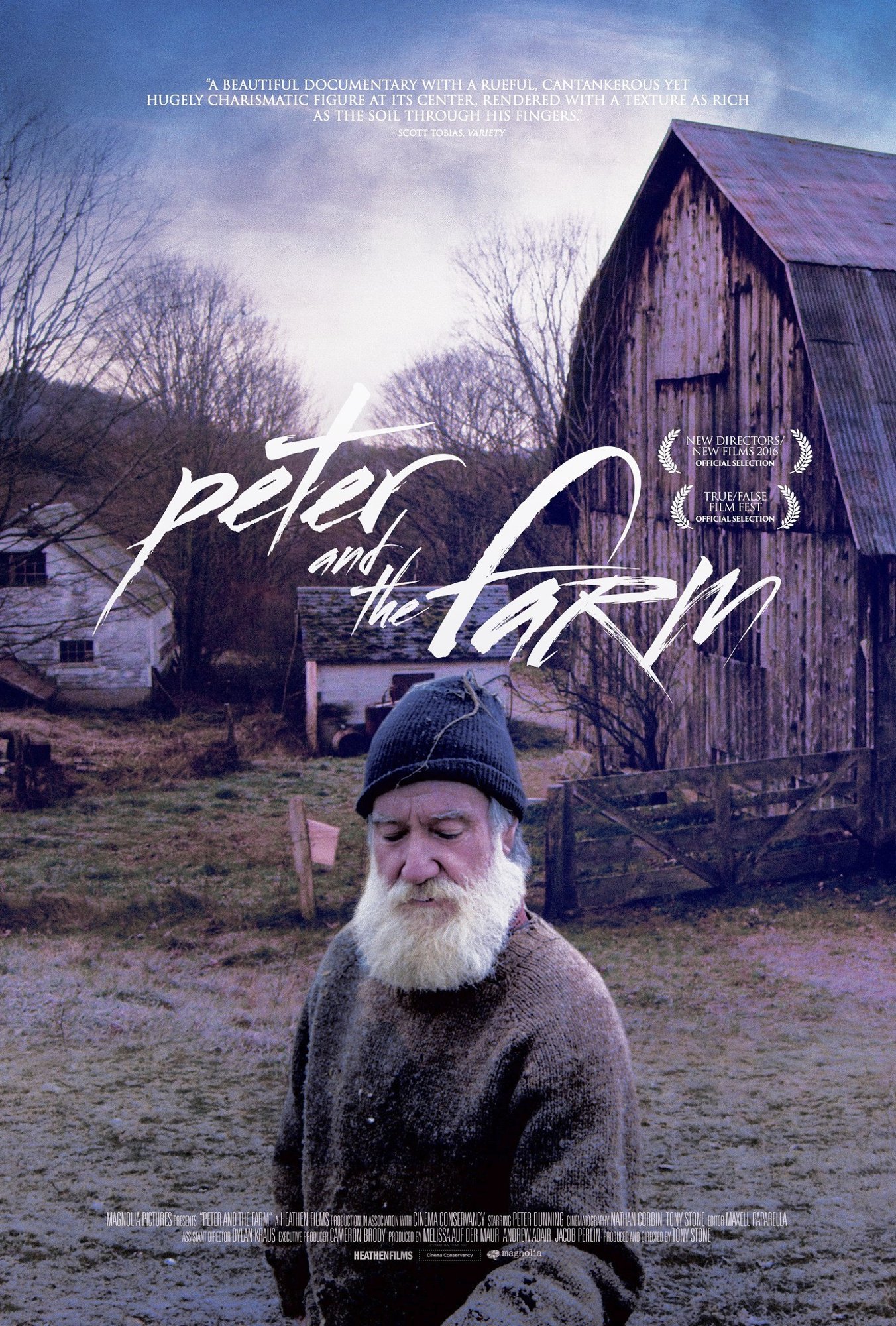 Artist, ex-hippie and organic livestock farmer Peter Dunning lives a life of solitude amid pastoral beauty and decay. He still has the beard and longish hair to fit his alternative past, and a love-hate relationship with his soil and profession. Our first view of Dunning’s Mile Hill Farm is through the front windshield of a vehicle approaching a ramshackle cluster of buildings in the green middle of nowhere that look to be already partially reclaimed by the fertile land.

The film, directed by Tony Stone, is a gloss-free depiction of organic farming, with all its mud, blood, flies, filth and casual animal cruelty.  At one point, when young assistant director Dylan Krause helps the farmer wrangle a sheep to the ground, the kid nervously looks for reassurance. “We can’t catch these lice, right?”

A scene that’s just as gritty, but not the least bit humorous, is when the camera catches Dunning struggling with a sheep that it tries to shoot in the head with a rifle – and misses with the first attempt. Then he casually cuts the dead sheep’s throat and throws his pigs a pan of blood.

Dunning has a multitude of stories, some of them ghastly but usually told in a cheerful tone that can go harder in the next breath. A mutilated hand is the result of a bandsaw accident he tells in loving detail. It left him with three gnarled fingers and a three-month hospital stay when he was 26.

When his demons are let loose, Dunning shares his regret for his inability to keep either of at least two ex-wives and his four adult children around him. “I could, in front of you, call all of my children. Not a one would answer the phone,” he tells his behind-the-camera audience.

He shows the exact places where two of his kids were conceived, each story involving Dunning and a wife camping out overnight to bring a predatory raccoon to justice. There’s also bitter resentment for how his adoptive family would tell him next to nothing about the biological mother he never knew.

It’s hard at first figuring out why the kids won’t visit or take the calls of the chatty old guy. Then the camera catches him in a low point, when he rages about his life choices and berates poor young Dylan for every imagined insult, and the family dysfunction begins to make sense.

Dunning is a man filled with rage, bitterness, self-revulsion and dark thoughts during his depressive, alcohol-fueled slides. At these times he admits the need to detox, “but not now.”

“I’ve spread and lost hope over every acre,” the dark poet says of the property he tour-guides the camera through, stopping to tell stories about his herds of sheep, cows, pigs, his dog and even a couple trees on the property.

“Life is really more impressive than death,” he says at one point. But he also mentions a rifle so powerful that it virtually obliterated the brains of a deer he had to use it on up close after wounding the beast. After which he says of his hired hand and the gun, “Paul hides it when I get suicidal.”

Dunning found his way to the property through the counter-culture and his artistic pursuits. He was – and to some extent still is – a painter and a sculptor. His pragmatic goal, when he was 33 and rudderless, was “half of the year to make money, half to make art.”

Over the decades that have passed since, Dunning has found that an organic farm is hardly a part-time venture. He admits that the year 1998 was the farm’s high point and “it’s been in decay ever since.”  Later, he eloquently describes the condition of land and landowner, perhaps quoting one of his own dark poems, “The old man is slowing down, and the weeds are speeding up.”

During one of his self-flagellating soliloquies he’s predicting how quickly he’ll be forgotten. “This used to be the Peter Dunning farm,” he imagines strangers saying dismissively of his land and his life.

Peter and the Farm is gorgeously shot, though some of the night scenes are too dark to be clearly seen. Rural Vermont looks both appealing and daunting. And the lonely, irascible, loquacious, contemplative, poetic, raging, drunk landowner knowns how to draw an audience.

Peter and the Farm is currently playing on Netflix ad is also available on iTunes, Amazon and other online sites.