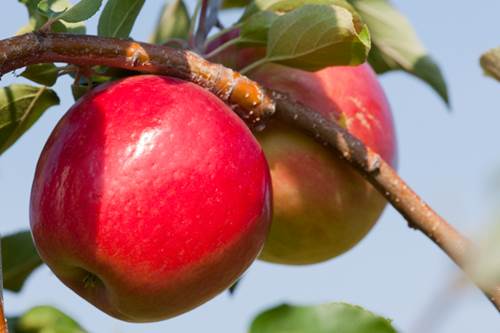 Anyone who has bit into a juicy Honeycrisp apple has the University of Minnesota to thank for what has become one of the most popular breeds of apple ever sold.

Bred specifically to be juicier, crispier, and sweeter, the Honeycrisp was first introduced in 1991 and since then millions of the apples have been planted in apple orchards around the world.

The Honeycrisp was so revolutionary that it was recognized as a top innovation of the decade by the 2006 Better World Report, according to the University of Minnesota (U of M).

But the Honeycrisp isn’t the only new breed of apple that the U of M has worked on. In fact, their breeders have introduced dozens of varieties of apples, berries, grapes, tomatoes, and even evergreen trees.

Now, there is another variety of apple joining the ranks, and by all accounts, it’s slated to give the Honeycrisp a run for its money.

The U of M’s new apple, First Kiss, made headlines when it’s release was announced just in time for the Minnesota State Fair.

Just how do these pioneers in cultivation create new apple breeds with specific traits? The answer is cross-pollination, a traditional method for innovating plants and crops and something that naturally occurs in the wild.

Researchers are playing build-a-breed with cross-pollination, by taking preferred traits of one plant and breeding it with another variety to create a wholly new breed.

For example, in 1887, according to the U of M, by breeding cold climate apples with apple varieties grown on the East Coast, researchers were able to develop a hardier apple built to withstand the drastic seasonal changes of Minnesota.

It’s a time consuming and lengthy process as was evidenced by the First Kiss apple which took decades to perfect.

I spoke with James Luby, U of M Horticultural Sciences professor who worked on First Kiss since its early beginning in 1997, about just what goes into making a new variety through cross-pollination.

Not surprisingly, it’s such a time-consuming process because the researchers have to wait for whatever new breeds they develop to grow and produce fruit.

First comes the actual pollination, and to achieve this Luby said they cover the flowers of a plant or tree designated as the “female tree” in order to avoid being pollinated by bees and other insects.

Then, a team will gather the pollen from the “father” that has whatever desirable traits or qualities they are looking for and by hand pollinate the mother flowers with the pollen, just like a bee would do.

After pollination, the researchers have to wait for seeds to develop which are then harvested and germinated over the winter. Once germinated, the hybrid seedlings are planted and it’s just a waiting game.

For apple trees, they go through a period of juvenility Luby explained, and aren’t ready to flower for about five to ten years.

Once the researchers have the new flowering trees, they make their selection based on appearance, texture, and of course, taste. Luby told me that one in maybe 200 seedlings are chosen for later grafting, which is how the U of M researchers clone their prototype.

“You can look at it like any prototype,” Luby said. “A car manufacturer might make a new car, but then they have to make more, and keep scaling up, to make sure it’s right for the consumer.”

This scaling up process involves growing trees from the prototype seedlings and making sure the resulting fruit or flowers are exactly what the researchers are looking for.

With First Kiss, eventually, the researchers came upon the perfect pairing with the Honeycrisp and a variety of apple developed by the University of Arkansas, the AA-44.

Because of this opportune crossbreed, the University of Minnesota created an apple with the same juicy texture of the Honeycrisp that would be available as early as late August. It also possesses a lovely red color.

“With First Kiss, we got the best of both worlds,” said David Bedford, a research scientist in the UMN’s Department of Horticultural Science, in a U of M News release. “Its crisp texture and spritely flavor make it an excellent choice for fresh eating and its early harvest date means Minnesota apple lovers can enjoy their favorite Minnesota grown fruit sooner than ever.”

Advancements in horticulture and agriculture typically start with a need. For many agricultural innovations, the aim is to find ways to make crops more resistant to droughts or disease. Looking forward, many researchers are working on creating crops that can handle climate change.

Luby told me about how he and his colleagues find ways to cross-pollinate breeds keeping in mind pest and disease resistance, particularly fire blight and apple scab.

Interestingly, the Honeycrisp is more resistant to apple scab than its new offspring, First Kiss.

The U of M is slowly in the process of working on identifying genetic markers of disease, something only made possible by the advancements made in gene mapping.

While drought and climate resistance remain a top concern for agriculturalists, I learned from Luby that this isn’t necessarily at the forefront of the U of M’s radar. Climate change’s impact is so varied and you can’t grow a perfect apple that will be able to thrive in any climate.

For example, the Honeycrisp is grown all over the world, even in Africa and while drought and irrigation isn’t a problem so much here in Minnesota, in Africa, apple growers may face completely different challenges. The U of M creates its variety by starting with what the consumer wants.

“We’re looking for an apple that tastes and looks good, or else no one will buy it,” Luby said.

When the Honeycrisp burst onto the scene with its incredibly juicy texture, it reinvigorated apple orchards here in Minnesota and has since become a fan favorite all over.

Other factors that the horticultural department is looking for is storage ability and cold hardiness. Storage and shelf life are particularly important because you could have the best apple in the world, but if it doesn’t last long off the tree then it makes marketing and selling the apple difficult.

First Kiss is available in limited quantity, but soon you’ll be able to find it at local Minnesota orchards and farmers markets and eventually your local grocery store.

But the next time you pass by the fruits and vegetables at your local supermarket, take a second to think about all the ingenuity that went into to creating that produce, from seed to harvest to your dinner table.