Can fish recognize their own reflection? • Earth.com 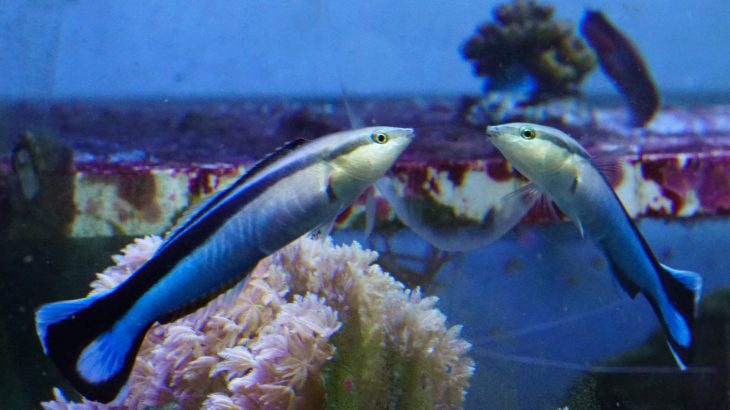 Can fish recognize their own reflection?

When fish swim up to the glass, do they recognize their own reflection? Are fish self-aware?

A new study conducted by researchers from the Max Planck Institute for Ornithology and Osaka City University says yes and no, as the results beg a broader question of what constitutes “awareness” in different species.

The study was published in the journal PLOS Biology, and the researchers focused on the cleaner wrasse (Labroides dimidiatus) fish to better understand self-awareness, a cognitive trait that few animals are thought to possess.

When the fish saw themselves in the mirror, the researchers observed behavior that seemed to suggest self-awareness, and the fish “passed” the mark mirror test which is used to test awareness in animals like primates.

However, the researchers are cautious to compare the wrasse’s passing marks to the self-awareness of other animals, and the study results are more complicated than a black and white definition of self-awareness and recognition.

The results do show that the fish are far more intelligent than previously given credit for.

“The behaviours we observe leave little doubt that this fish behaviourally fulfils all criteria of the mirror test as originally laid out,” said Alex Jordan, the senior author of the study. “What is less clear is whether these behaviours should be considered as evidence that fish are self-aware–even though in the past these same behaviours have been interpreted as self-awareness in so many other animals.”

Mirror self-recognition, or the ability to recognize one’s reflection for what it is, is an essential marker of awareness and cognition in animals. With the cleaner wrasse, a mirror mark test is more challenging.

Researchers usually consider the mark mirror test “passed” if an animal recognizes a foreign mark on its reflection and tries to investigate or remove it, but fish don’t have limbs.

For this study, the researchers placed a colored mark on a cleaner wrasse and waited to see how it reacted to its reflection. The fish tried to remove the mark after seeing themselves in the mirror by scraping their bodies on different surfaces which the researchers saw as self-aware behavior.

The fish didn’t try to remove transparent marks, and they didn’t remove marks if they never saw their reflection.

The fish also didn’t attempt to remove a mark on themselves if they saw another fish had one which means that the wrasse understood the difference between another fish and its reflection.

However, what exactly this means for fish awareness is unclear, according to the study.

“Depending on your position, you might reject the interpretation that these behaviours in a fish satisfy passing the test at all,” Jordan said. “But on what objective basis can you do this when the behaviours they show are so functionally similar to those of other species that have passed the test?”

In a companion commentary to the study, Frans de Waas, a primatologist at Emory, is also quick to point out that self-awareness for fish probably doesn’t mean the same thing that it does for humans or other species.

‘What if self-awareness develops like an onion, building layer upon layer, rather than appearing all at once?” said Waal. “To explore self-awareness further, we should stop looking at responses to the mirror as its litmus test. Only with a richer theory of the self and a larger test battery will we be able to determine all of the various levels of self-awareness, including where exactly fish fit in.”