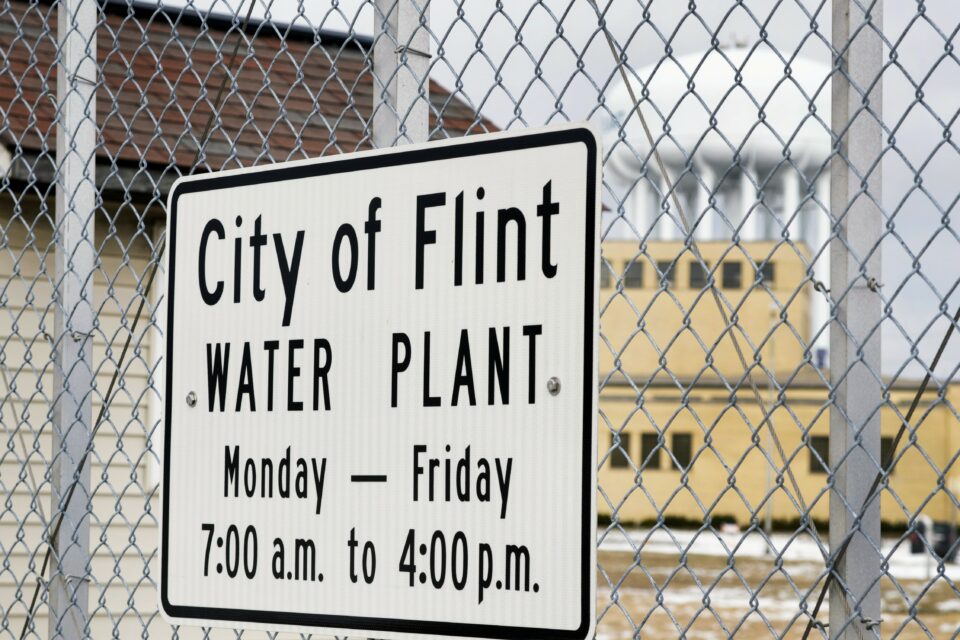 As a result of a budget crisis in 2014, the city of Flint in Michigan, U.S., switched its water supply from Lake Huron and the Detroit River to the Flint River. The new supply of water was not treated properly and consequently nearly all 100,000 residents of the city were exposed to drinking water with unsafe levels of bacteria, disinfection byproducts, and lead, which is neurotoxic. The residents soon began to experience health issues and testing revealed up to seven times the acceptable level of lead in the water supply of homes.

The source of the contamination was found to be aging lead pipes in the water supply line. Usually, water is treated with substances to minimize leaching of lead from supply pipes, but in the case of the Flint water crisis, this treatment was not carried out. Of particular concern was the fact that between 6,000 and 12,000 children were exposed to drinking water with high levels of lead during the year in which water was derived from the Flint River. Children are particularly at risk from the long-term effects of lead poisoning, which can include a reduction in intellectual functioning and IQ, and an increased chance of Alzheimer’s disease later in life.

Although Michigan Governor Rick Snyder declared a state of emergency in the county, and President Barack Obama declared a federal state of emergency and funding to assist affected residents, a new study indicates that the people of Flint are still suffering the consequences of this environmental disaster. Despite financial reparations to victims, 15 indictments of people potentially responsible, several resignations, firings and suspensions, the consequences of this traumatic time persist.

The study, which involved the largest mental health survey of the Flint community, questioned 1,970 adults from different households in Flint between August 13, 2019, and April 10, 2020. Surveys were conducted online and via mail by a national survey research firm. The results, published in the Journal of the American Medical Association (Network Open), indicate that  one in five adults, or roughly 13,600 people, are estimated to have clinical depression, and one in four, or 15,000 people, are estimated to have PTSD, more than five years after the drinking water of Flint was declared lead-free in January 24, 2017.

“The mental health burden of America’s largest public-works environmental disaster clearly continues for many adults in Flint,” said Aaron Reuben, a postdoctoral scholar at Duke University and leader of the research study.

As the water crisis unfolded over a period of several years, residents manifested symptoms of anxiety over the potential physical and mental health impacts of lead poisoning in themselves and their children. They experienced anger at political leaders and felt guilty about giving their children contaminated water. Despite the fact that numerous prominent figures have been indicted for crimes relating to the water crisis, only one has yet been convicted.

“We know that large-scale natural or human-caused disasters can trigger or exacerbate depression and PTSD,” said study senior author Dr. Dean Kilpatrick, a professor at Medical University of South Carolina (MUSC). Dr. Kilpatrick noted that there was clear evidence of high rates of mental health problems in the Flint community during the first years of the crisis. “What we did not know until now was the extent to which Flint residents continued to have mental health problems at the clinical diagnosis level, five years after the crisis began.”

During the study, Flint residents answered survey questions pertaining to their perceived exposure to contaminated water, their past year prevalence of depression and PTSD (using DSM-5 diagnostic criteria), and their potential risk factors for depression and PTSD, including prior exposure to potentially traumatic events, prior physical or sexual assault, and low social support. Adults were also asked whether they were ever offered or received mental health services.

According to Dr. Kilpatrick, past year rates of depression and PTSD identified in Flint today are three to five times higher than national estimates among US adults overall, and likely result from a combination of higher base rates of mental health problems in Flint before the crisis as well as a significant exacerbation of problems resulting from the crisis.

Dr. Kilpatrick said residents of Flint, a predominantly low-income, Black community, faced many challenges, before the water crisis, that can negatively impact mental health, including socioeconomic disadvantage, racism, and high exposure to potentially traumatic events, including prior physical or sexual assault.

Particularly striking was the finding that those with prior physical or sexual assault were more than three times more likely to have depression and more than six times more likely to have PTSD than those without this history. “This highlights the importance of considering the cumulative effects of prior exposure to traumatic events when evaluating the effects of environmental disasters on mental health,” Kilpatrick said.

It is clear from the study’s results that more should be done to provide mental health treatment for the residents of Flint. “We study these problems after disasters because they are common outcomes and because they are significantly impairing to individuals and communities. But we also study these problems because we have good treatments that are effective for most people,” said study co-author Dr. Sandro Galea of the Boston University School of Public Health.

“There is a clear unmet need,” said Reuben. “Nearly 100 percent of surveyed Flint residents reported that they changed their behavior to avoid consuming contaminated water during the crisis, and the vast majority still worry that the exposures they had may cause future health problems for themselves or their family members.”

According to Reuben, uncertainties about exposures and future harms meaningfully contribute to psychological distress after environmental disasters, and the study found that adults who thought exposure to contaminated water had harmed their or a family member’s health were significantly more likely to have past year depression and PTSD.

“The vast majority of our respondents were never offered mental health services,” said Reuben, “despite clear indication that the crisis was psychologically traumatic.” Most Flint residents who were offered mental health services went on to use and benefit from them. “Now that pipes are being replaced, the time is right to begin a second phase of recovery from the water crisis – one that focuses on providing additional resources to heal psychological wounds.”